On this day, we hit the road and departed from Eilat, but only after our tour bus stopped at the Eilat Stone company.  Eilat stone is a by-product of copper mining in nearby Solomon's mines.  The blue and green color come from malachite and azorite.  Both of these are available individually at other copper mines throughout the world, but Eilat is the only place where they are both combined.  The copper mining here stopped in the 1970s, so the price of this stone is increasing due to decreased supplies.  So of course, I had to buy one!  They may open the mines again just for this stone! 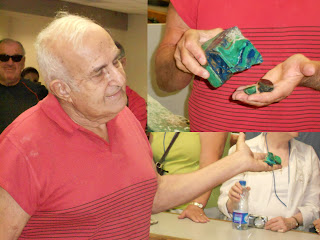 We then headed up the Aravah valley toward the Dead Sea.  Our next stop was Masada.  Masada was built by Herod the "Great," as a place of escape should he ever need one (remember, he was totally paranoid).  It was an amazing feat of engineering.  After the fall of Jerusalem in 70 AD, a small group of Jewish people held out here for a few years until the Romans came and built a ramp to the top.  When the Romans reached the top, the small brave band killed each other and committed suicide instead of being taken captive by the Romans.  Today, Israelis pledge allegience here, and they say: "Masada shall never fall again."  Ironic that today the Roman Empire is gone, yet Israel prevails!  The beautiful view from the top of Masada was too much for words...


After the visit to Masada, it was time to go to our Dead Sea hotel, which was nearby.  We couldn't wait to float in the Dead Sea... we had heard how much fun it was!  The extreme mineral content makes you float like a cork.  Some of us even had trouble getting back onto our feet again!  It was a perfect way to end a day that had a high temp of 96 degrees. 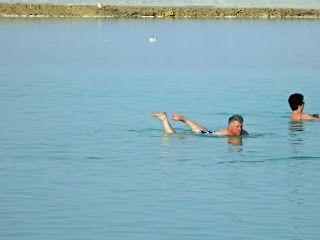 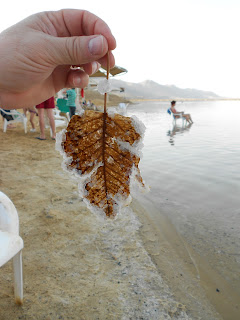 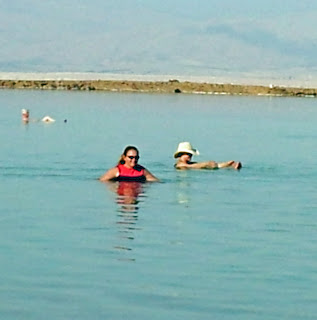 As we were settling down for the night, I heard a VERY LOUD noise, so I rushed to my window to see very loud and very fast jets flying up the Dead Sea.  The next day, our tour leader told me that the IDF does that all the time, just to let the enemies of their state know that they are there - a warning of sorts. That night, I also noticed a HUGE bonfire at a neighboring hotel.  I thought that was odd - seeing as the temps were still in the 90s after sundown - until someone told me the next day that it was a Lag b'Omer bonfire.

Posted by Gratefully Grafted In at 5:00 PM