Day three, and I had yet another night of no sleep.  I don't get it... falling asleep usually isn't a problem for me.  Yet on day three, I still had trememdous energy all day, which is good because it was another busy day with tons to see.

First thing in the morning, we boarded a boat on the Sea of Galilee.  The boat took us to the north end of the sea and dropped us off in Capernaum.  The boat ride was really cool!  The captain did a fishing net demo - see picture below.  Did you know that tilapia is indigenous to the Sea of Galilee and is also called St. Peter's fish?  Also, when Jesus told his disciples that a city on a hill could not be hidden, he was standing in full view of Safed, the highest city in Israel.﻿﻿﻿﻿﻿﻿


Our bus met us after a tour of the excavated Capernaum, and we headed up the Golan Heights toward Mt. Hermon, Lebanon, and Syria.  One of my favorite spots of the entire trip was Cesaerea Philippi.  Located at the base of Mt. Hermon on the Israel side, there was a former pagan worship grove there, called Paneus (today, Baniyas).  There is a giant cave on the site that was known as "The Gates of Hades."  This is where Jesus and His disciples were when Peter declared Jesus to be the Messiah.  When Jesus said that the Gates of Hades would not prevail against His church, he was sitting by this cave!  Seriously, I felt like I was in a Ray Vanderlaan DVD.

This area is also the source of the Jordan River. Fresh springs of living water flow down from the mountain and into the Sea of Galilee.  This water was crystal clear... I refilled my water bottle and enjoyed it tremendously!

After visiting this fabulous area, our tour continued along the Golan Heights near Mt. Hermon (we were within two miles of Lebanon and the Hezbollah), where we were then able to stop and view the border with Syria.  The Golan Heights was acquired by Israel after the six day war of 1967, and then almost lost when Syria and Egypt attacked Israel on Yom Kippur 1973 (the holiest day of the year for Israel).  The tiny remnant of IDF soldiers were able to stave off the huge number of attacking Syrians until backup could arrive 24 hours later.  Ninety percent of those soldiers lost their lives in this battle.

It is imperative that Israel maintain possession of the Golan Heights, for national security.  Losing the Golan would result in indefensible borders and also losing control of the water supply, which could be diverted by the enemies of Israel.

After our Golan tour, we continued our touring day on the supposed Mount of Beatitudes, where of course a large Catholic church had been built. 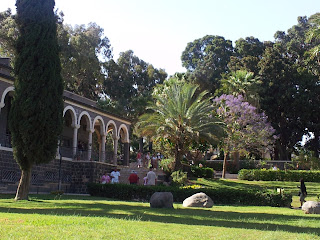 Our last stop was a museum, called the Ancient Galilee Boat Museum, that featured a boat that was discovered buried in the sands of the Sea of Galilee a few years ago when the water level was very low.  The boat has been identified as being approximately 2000 years old.


Back at the hotel, we learned that a huge celebration was about to begin in Tiberias - right outside our hotel - for the Rabbinic festival of Lag b'Omer.  We took a walk along the streets of Tiberias, among thousands of Jewish people who came to commemorate the death of Rabbi Simon Bar Yochai, who is one of the founders of modern Rabbinic Judaism and Kabbalah (Jewish mysticism).  It is a custom for orthodox Jewish families to bring their three-year-old sons to the tomb of Rabbi Shimon for their first haircuts.  Children gather wood for weeks, in order to have humongous bonfires to commemorate the annual festival.

By the way, Lag b'Omer means the 33rd day of counting the omer, which takes place from the Feast of Firstfruits until the day of Shavuot (or in Christianese - From Ressurection Sunday to Pentecost).

Posted by Gratefully Grafted In at 5:30 PM