The Four Cups of Passover

Passover is just around the corner, that joyful celebration of deliverance from physical bondage in Egypt and spiritual bondage from sin.

The four cups of Passover are deeply symbolic.  They have been around in Jewish tradition for thousands of years.  Two cups are drank before dinner, and the other two after dinner. 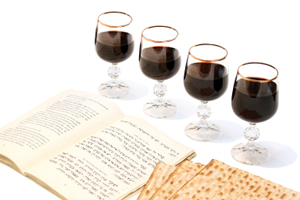 The first cup is the cup of Sanctification.  That word means holy, or set apart.  God set apart the Israelites as His chosen people.  In the Seder, the first cup is called the Kiddush, which comes from the same root word as Kadosh, meaning holy.

The second cup is the cup of Judgement.  When Yeshua was praying in the garden, He asked his father to take this cup from him.  But to do His father's will, He agreed to "drink of it" so that we would not have to.

The third cup is the cup of Redemption.  Just as the Lord God redeemed Israel from Egypt with an outstretched arm, so too did Yeshua redeem us with His outstretched arm on the cross.  During the Seder that night, Yeshua instutited the new covenant, which had been promised to Israel in Jeremiah 31:31.  Luke 22:20 tells us, Likewise He also took the cup after supper, saying, "This cup is the new covenant in My blood, which is shed for you.  Jesus was literally sealing the new covenant promise with this third cup of the Seder, the Cup of Redemption.  He did not drink of it Himself, therefore excluding Himself from redemption so that He could become redemption for us.  He gave the cup to His disciples to drink, in order to seal the deal with them.

The fourth cup, called the Cup of Praise, is reserved for the future wedding of the Lamb.  This is why Yeshua promised that He would not drink of the fruit of the vine with them until the Kingdom of God is set up on Earth when He returns.

Jesus came to Earth to become our sacrificial Passover Lamb.  This is the pivotal point of all history, the fulfillment of God's promise in the garden to send a redeemer who would crush satan's head.

Unfortunately, the church was overtaken by Rome in the fourth century, and all Jewish forms of worship were made illegal. The rich, Biblical foreshadowing of what Yeshua fulfilled at Passover (and Unleavened Bread, and Feast of Firstfruits) was swapped for a pagan festival named after a Babylonian fertility goddess.   "Easter" (or Ishtar, or Ashtoreth, or Astarte, or Eostre - they are all the same) had been celebrated by pagans for thousands of years before Yeshua came to Earth to redeem us.

I was an adult before I knew that the "Last Supper" was a Passover Seder.

I don't know about you, but it seems quite incongruous to me to celebrate our redemption by the Passover Lamb with an Easter Ham... just sayin'!

Posted by Gratefully Grafted In at 5:44 PM No comments:

Tongues of Men and Angels?

Ahh, the gift of tongues. 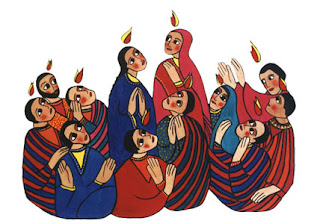 I believe no other subject causes more division in the church (unless you count music styles or which Bible version one must use).

For the sake of this post, let's say there are two groups of people - Christians that speak in tongues (Group A), and Christians who do not (Group B).

I belonged to Group B for about the first 15 years of being a believer, and didn't have too much exposure to Group A.  I was born again in a church that taught that the spiritual gifts are no longer for today, because the Bible was complete and the Holy Spirit power gifts (such as tongues, prophecy, miracles, etc) weren't needed anymore.  There was always this unspoken implication (okay, I have actually heard people speak it, too) that speaking in tongues verged on the demonic, and that it blasphemed the Holy Spirit.  And frankly, the idea of speaking in tongues was a little weird!

But I kept meeting people who had this strange gift.   I grew curious about it, because the people didn't SEEM like they were the spawn of satan.  (Although I WAS really irritated by the woman who told me that I was probably not born again because I didn't speak in tongues).

I reached a turning point almost three years ago when I went on a mission trip to Mexico.  I was blown away by the presence of God in the place we visited.  I purchased a book written by the founder, Charla Pereau, in which she gives her testimony, called Charla's Children.  She'd been saved as a child and was a good Lutheran housewife in her 40s - looking forward to her youngest child entering school so that she would have more free time to have coffee and grocery coupon parties with other moms while the kids were at school.

Like me, she had been taught that tongues or the other miraculous gifts were NOT for today.  But for her, the subject kept coming up through different people that she came in contact with.  Eventually, she received the baptism of the Holy Spirit (along with the gift of tongues), all the while kicking and vehemently protesting!  But the Holy Spirit really got ahold of her and changed her life.  She will be the first to say that it was because of His power in her life that she was led to found the orphanage in Mexico that eventually grew into a full-fledged mission featuring many ministries and outreaches.

It was a combination of seeing the fruit of the mission, and then reading her book, that totally changed my thinking on the matter of tongues (and the other gifts of the Holy Spirit as well).  I prayed for, and received, the gift of tongues just over a year ago.

When studying any doctrine, it is important to study everything the Word says about it and not use a "proof-text"  (which is a verse taken out of context to prove a point).  For example, when Paul is encouraging the Corinthian church to make sure there is an interpreter, he is chiding that congregation for its absolute chaos.  They were immoral, carnal, full of strife... spiritual babes not ready yet for meat.  He was trying to teach them to tone it down a little, for heaven's sake.

Putting all the passages on a topic together and then studying them out is called "systematic theology."  Doing so gives one a much more balanced doctrinal viewpoint.

One thing to remember is that scripture teaches that there are different kinds of tongues.  There is the kind in Acts 2, when the apostles were able to speak the languages of all the people visiting Jerusalem for Shavuot (Pentecost).  This happened to my friend Patty - she was able to speak Spanish in an emergency when she didn't know Spanish.

1 Corinthians 14:2 gives us a glimpse of another kind of tongue -  For he who speaks in a tongue does not speak to men but to God, for no one understands him; however, in the spirit he speaks mysteries.  Chapter 12 lists a variety of gifts, including tongues, that the Holy Spirit distributes according to the will of God.  Mark 16:17 promises that this would happen - And these signs will follow those who believe: In My name they will cast out demons; they will speak with new tongues - the Greek word for "new," kainos, means just that:  a new kind, unprecedented, novel, uncommon, previously unheard of.

So are they wrong?  Those denominations and seminaries who claim that tongues are not for today? After all, scripture teaches that where there are tongues, they will cease (1 Corinthians 13:8).

I do believe that they have legitimate reasons for what they teach, and it has to do with church history.

The letter to the seven churches in Revelation gives us a prophetic and sequential picture of what was going to happen in the church throughout the messianic age, leading up to the return of Jesus.  Each one, in order, coincides with what took place, and is taking place, in church history.  (Seven represents completeness in scripture).  If you would like more information, click on the "Seven Churches" label on the right side of this page and have a look.

Anyway, the church separated itself from her Jewish roots beginning in about the fourth century, which led to mass confusion and corruption.  The church in the middle ages is represented by the church at Thyratira (the corrupt church), followed by the Reformation Age church, represented by Sardis (the dead church).  These were eras where there wasn't a whole lot of Holy Spirit action.  (I struggled with the Reformation church being called dead, until I realized that, in the words of Jesus, a grain of seed must fall to the ground and die before new life could spring up.)

The next church, Philadelphia, is a church that sprang to life after the turmoil of the Reformation.   The great Missionary age was born, and the outpouring of the Holy Spirit began to return.

Here is where it gets exciting!  The Pentecostal movement was born at the same time as modern day Zionism, which really took off in the late 1800s.  Think of the Welsh Revival and the Azuza Street revival in the early 1900s, and there have been many other great revivals since then.  Now that Israel has become a nation again, the words of Joel 2 (he is speaking of the last days) are literally being fulfilled now:

I know that not everyone will agree with me, and that is fine, but I believe that people on both sides of this doctrine really need to take 1 Corinthians 13:1 to heart:

Though I speak with the tongues of men and of angels, but have not love, I have become sounding brass or a clanging cymbal.

Please, no matter which side you are on, be kind to those who hold to a different doctrine than you do.  Please don't point fingers and call them demonic, blasphemers, unsaved, a lesser Christian, etc. etc.  Remember the prayer that Jesus prayed in the garden before His death, that his believers will be one in Him.  (John 17:20-23).

Posted by Gratefully Grafted In at 12:28 PM No comments: