Okay, now that I have your attention, I'm really talking about the connection between stones and bread. (Get it?  Rock and roll?  Stones and bread?   I know; not that funny...) 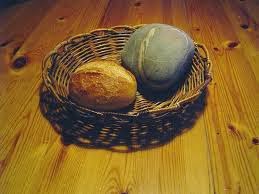 I was hanging out in Deuteronomy 8 the other day, and came across this:

So He humbled you, allowed you to hunger, and fed you with manna which you did not know nor did your fathers know, that He might make you know that man shall not live by bread alone; but man lives by every word that proceeds from the mouth YHVH.

In context, we see that Moses was on the mountain for forty days with no bread, and at the end, he received YHVH's instructions - written on stone tablets.

Moses, a foreshadow of the Messiah, was given the Word - the Bread of Life - on stones.

Fast forward to Yeshua, spending His own forty days in the wilderness with no bread.  The accuser, who knows the scriptures probably better than anyone, challenged Yeshua to turn the mountain stones into bread.  Yeshua went right back to Deuteronomy 8 and quoted the aforementioned verse.

We see another connection in the very next chapter, when Yeshua said Or what man is there among you who, if his son asks for bread, will give him a stone? Yeshua is saying that it is a good thing to desire the Bread, the One who fulfilled everything that was written on the stones of Sinai.

The purpose of the law, written on stone and given to Moses, was to reveal our sinful nature and demonstrate our need for redemption.  Yeshua, the Bread of Life, fulfilled the law, gave His life for us, and became our Chief Cornerstone in Whom we are to place our trust.

John 6 is full of references to bread.  The chapter begins with Yeshua feeding the 5000.  The next day, people showed up for another free meal, and were taught about the Everlasting Bread instead.

This caused grumbling among some of the people.  Yeshua continued, "I am the bread of life.  Your fathers ate the manna in the wilderness, and are dead.  This is the bread which comes down from heaven, that one may eat of it and not die.  I am the living bread which came down from heaven. If anyone eats of this bread, he will live forever; and the bread that I shall give is My flesh, which I shall give for the life of the world.”

Wonderful, awesome Bread!  No need to worry about gluten or carbs.  This Bread gives life!
Have you had your Bread today? 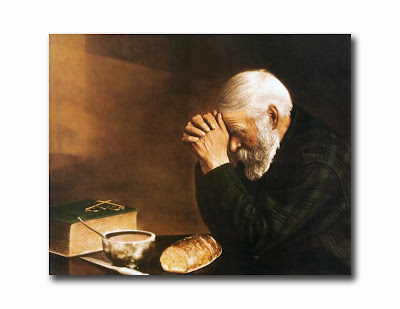 Posted by Gratefully Grafted In at 9:16 AM No comments:

A Fresh Look at the Third Commandment

For a long time, the term OMG has really bothered me.  People would throw His name around so casually!  Haven't they heard the third commandment?  I even wrote a blog post awhile back called "Oh, My Bob!"  (Click here if you feel like reading it). 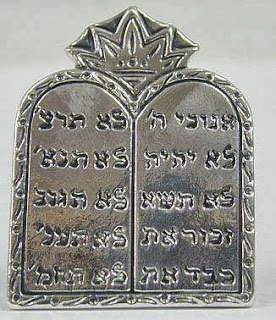 I must confess, I have been looking at the original language of the third commandment, and have come to realize that the commandment is saying something altogether different than what I have always thought.

(If you think this releases you to run around OMG-ing, please read Ezekiel 36:23, Joel 2:26, and many other places - His name is YHVH and it is HOLY).

The text in question is Exodus 20:7:  You shall not take the name of YHVH your God in vain, for YHVH will not hold him guiltless who takes His name in vain.

First, the word translated take.  It means to lift up.  This is the origin of placing one's hand on a Bible in a courtroom and swearing an oath, in the name of God.

Putting the two together, we see that this verse is telling us how serious YHVH is regarding the taking of an oath.  This can be confirmed many times in scripture.

Remember the Gibeonites in Joshua chapter 9?  They dressed themselves up as if they had come from a long way, and tricked the Israelites into making a treaty with them in order to save their hides.  The Israelites made the mistake of not consulting YHVH first.  Later, when they realized that the Gibeonites lived nearby, this is what they had to say: 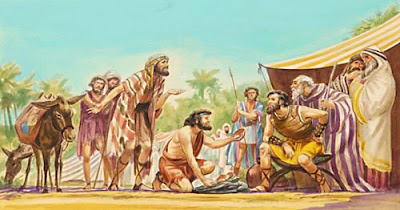 Even rash oaths must be honored.  Are you familiar with Jephthah's rash vow in Judges 11?  He came home from war, and enthusiastically promised YHVH that he would offer the first thing that he saw as a sacrifice.  He did not anticipate that it would be his daughter.  (Biblical scholars differ on the result of Japhtheh's vow).

In Matthew 5, Yeshua reiterated the importance of an oath, to the point of cautioning us not even to do it.  James 5 repeats this caution in verse 12.  But above all, my brethren, do not swear, either by heaven or by earth or with any other oath. But let your “Yes” be “Yes,” and your “No,” “No,” lest you fall into judgment.

Are you with me so far?  You can search the scriptures and find much more on the importance of oaths.  The Lord God takes them very seriously.

Genesis 26:3 tells of an oath that YHVH swore to Abraham:  Dwell in this land, and I will be with you and bless you; for to you and your descendants I give all these lands, and I will perform the oath which I swore to Abraham your father.  We can go through the book of Genesis and see this promise repeated several times.  Genesis 13:15 reveals that the promise is forever.

Hebrews 6:17 tells us that it is impossible for God to lie.

Now that Israel is back in the land that was sworn to her by Almighty God so very long ago, there are many who would like nothing more than to see her gone, and her enemies fight tooth and nail to see that happen.   However, their fight is futile... God CANNOT lie.  His purposes WILL go forward, whether people like them or not.

Israel has endured four major wars, countless minor wars, a media war, and a commerce war (the BDS movement, which stands for Boycott, Divest, and Sanctions against Israel).  None of these things are working for those opposed to Israel.  Zechariah 12:3 warns us "In that day I will make Jerusalem a stumbling block for all people; all that burden themselves with it shall be cut in pieces, though all the people of the earth gather against it."

Ouch.  I don't think it gets much clearer than that.

Posted by Gratefully Grafted In at 4:41 PM No comments:

Creation and Millenia - A Godly Pattern

I just love how our God is a God of order!  I have been recently studying the correlation between the seven days of creation and the millennia (thousand year periods) of human history.  The Word speaks often of the number seven, which represents completeness.  In fact, seven in Hebrew is sheva, which carries the threefold meaning of seven, completeness, and a sworn oath.  (Note:  If you don't believe in a literal 7-day creation or that the earth is young, this post is probably not for you) 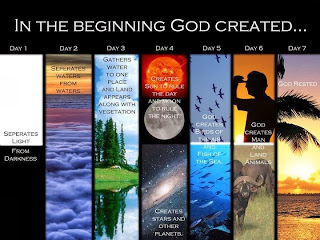 Day 1 – God separated light and dark
The first words of Elohim were "Let there be light."  Notice the sun and moon were not created yet; He Himself was the light!  So what was happening during the first thousand years of man's existence? Let's take a look.
.

Day 2 – God separated the waters
The waters were separated; some to the earth and some to the skies.  The part in between was called the expanse, or firmament.  Its purpose was to divide.  What took place during the next millennium?

Day 3 – The dry land appears, vegetation begins to grow
This day saw the birth of sustenance that would be needed to sustain life on Earth.  What was going on in our corresponding thousand-year period?

Day 4 – The sun, moon, and stars appear for signs and seasons, days and years
The earth, along with its newly-formed vegetation, was given the sun so that the vegetation could bloom and grow. The earth was also prepared to sustain the life that was about to come.


Day 5 – The creatures of the ocean and the birds of the air created
It is interesting that only animals of the sea and the air were created on this day, but not the land animals yet. Is there significance to that?  (Rhetorical question - everything has meaning in scripture)


Day 7 – And God rested from His work - Shabbat (Sabbath)


So what happens next?  At the end of the seventh millennium of rest, there is a brief war in which satan is unbound and utterly vanquished.  Then the New Jerusalem will come down from the New Heavens and be joined with the New Earth.  Isaiah 66:17 promises, "For behold, I create new heavens and a new earth; And the former shall not be remembered or come to mind."  Revelation 21 completes the picture.
Bonus: My friend Jill showed me this cool correspondence within the Days of Creation:


In closing, I just want to say that all of this beautiful order laid out by our Creator should give great reassurance to those of us living in these last days.  We do not have to have any fear of whatever trials about to come on the Earth.  Our loving Father has a master plan, and we are privileged to be a part of it. 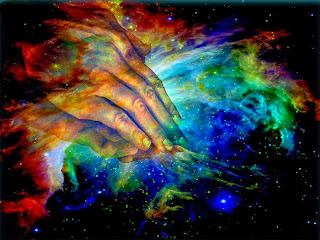