I think it is no coincidence that the title of today's post is an anagram.

This post today is simply a reminder of why I study the Bible the way I do - this is Jewish Roots 101.  In Christianity today, we have over 30,000 denominations, each with their own twist.  Why is that?

The first believers were all Jewish.  Jesus and His family were Jewish.  He is the prophesied Jewish Messiah.  Ever since the Jewish roots of our faith were severed (mostly beginning in the fourth century under Constantine and Rome), there has been so much confusion!

Much of the confusion is due to Replacement Theology.  This is the idea that the church replaced Israel - for good.  Many churches still teach this today.

God deals with His people in terms of covenants.  The Abrahamic covenant was permanent, unconditional, and irrevocable.  The covenant made with the Israelites through Moses at Mt. Sinai was conditional and temporary.  All covenants beginning with Abraham were made with the Jewish people, including the new covenant.

Jeremiah 31:31 says this:  Behold, the days are coming, says the Lord, when I will make a new covenant with the house of Israel and with the house of Judah—  not according to the covenant that I made with their fathers in the day that I took them by the hand to lead them out of the land of Egypt (emphasis mine).  Jeremiah is letting us know that a new covenant is coming to replace the one given after leaving Egypt - which was the covenant God made at Sinai with Moses and the Israelites.

Fast forward to Ephesians 2:12-13 (Paul is speaking to the Gentiles here):   that at that time you were without Christ, being aliens from the commonwealth of Israel and strangers from the covenants of promise, having no hope and without God in the world.  But now in Christ Jesus you who once were far off have been brought near by the blood of Christ.

Romans 11 gives us a wonderful picture that demonstrates this truth.  Paul is speaking of the Jews in verses 11 and 12:  I say then, have they stumbled that they should fall? Certainly not! But through their fall, to provoke them to jealousy, salvation has come to the Gentiles.  Now if their fall is riches for the world, and their failure riches for the Gentiles, how much more their fullness!

Speaking to the Gentiles, Paul says, "And if some of the branches were broken off, and you, being a wild olive tree, were grafted in among them, and with them became a partaker of the root and fatness of the olive tree, do not boast against the branches. But if you do boast, remember that you do not support the root, but the root supports you."

Finally, Paul reiterates God's promise to His people Israel in verses 25 and 26:  blindness in part has happened to Israel until the fullness of the Gentiles has come in. And so all Israel will be saved, as it is written:

“The Deliverer will come out of Zion,
And He will turn away ungodliness from Jacob;
For this is My covenant with them,
When I take away their sins.” 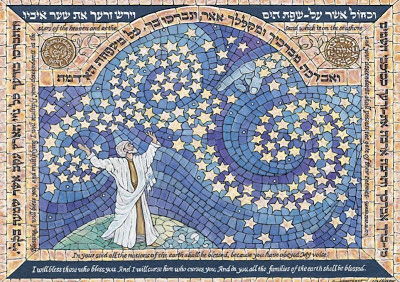 The Abrahamic covenant is everlasting and unconditional.  Israel was promised the land, the Seed, and the blessing.  The Word promises, "I will bless those who bless you, and curse those who curse you."  This promise was repeated to Isaac and to Jacob, and history has proven over and over again that it is true.  Believers, it is our job to bless Israel!  God keeps His promises - He WILL bless you if you bless His people.
Posted by Gratefully Grafted In at 7:30 AM No comments:

Yesterday I was in my car, listening to a preacher teach on the scripture passage about the bleeding woman and the raising of Jairus' daughter.  As I was driving, the Lord gave me a little further clarification.

About a year ago, I had written a post on this very passage, showing that the two stories were really one story.  You can review the post here if needed:

Toward the end, I made the subjective conclusion that the woman represents everyone who will ever come to the Lord, whether Jew or Gentile, and that the synagogue ruler represents unbelieving Israel.

I see now that the little girl herself is a representation of Israel.  She was doing well and thriving for twelve years - a number that represents divine government in God's kingdom.  Meanwhile, the bleeding woman, representing the Gentiles, was unclean and without hope.

The moment the woman is healed, the little girl dies.  We can now see a picture forming of abundant life being offered to the Gentiles, while death (albeit temporary) comes to Israel with their rejection of the Messiah.  We don't know how long she remained dead; the passage doesn't say.  We do know that Yeshua was on His way there.  But the great news is that she came to life again!

The other thing to note is that the woman was healed very publicly, but Yeshua raised the young girl privately.  When He reveals Himself to national Israel, the rest of His faithful remnant - believing Jews and Gentiles - will have just been removed from the Earth (see Revelation 6).  It is very much like Joseph revealing himself to his brothers - everyone leaves the room for their private reunion.

For more on how Joseph is a shadow of the Messiah to come, click on the following link:

Posted by Gratefully Grafted In at 2:25 PM No comments: