A Trilogy of Messiah

I was at a conference awhile back that had a bookstore on site.  One of the books featured was the "Jesus-Centered Bible."  I had to chuckle a little... aren't they all?


The Messiah is evident all throughout the scriptures, from Genesis 1:1 through Revelation 22:21.

One of my favorite places in the scriptures is the book of Psalms.  I have been hanging out there this month, just enjoying His presence there.

Did you know that the word salvation appears 63 times throughout the book?  And did you know that the Hebrew word for salvation is Yeshua, which also happens to be the name of the Messiah?  The name we English speakers know is Jesus, which is a transliteration of the Greek word Iesous.  (Note:  the letter J didn't show up until the 16th century.  The Hebrew letter is a yod, which sounds like a y).

Anyway, the grammar police in me digresses.  I want to visit a particular section in the psalms that gives us a complete picture of the Messiah.  Throughout history, the Jewish sages have been perplexed at the two very different portrayals of the Messiah.  Some concluded that there were two Messiahs.  Others thought that perhaps there was one Messiah, but He came twice.  These two pictures of the Messiah have names - Messiah ben Yosef (son of Joseph, the Suffering Servant), and Messiah ben David (son of David, the Reigning King).

In Psalm 22, He is portrayed as the Suffering Servant.  When you read it, you see such a clear picture of His death.  When Yeshua spoke the first line of this psalm while He was suffering on the tree, it was His way of calling our attention to the entire psalm.  My God, my God, why have you forsaken Me?

The psalm describes the sort of death He would suffer... hundreds of years before crucifixion was even invented by the Romans as a form of execution. It also foretells the division of His garments.
I am poured out like water
And all My bones are out of joint
My heart is like wax; it has melted within Me
They pierced my hands and My feet
They divide My garments among them
And for My clothing they cast lots

During His first advent, the Messiah suffered, died, and rose again in order to atone for the sin which entered the world back in the garden.  He then went back to heaven so that the good news of salvation by His finished work could circle the globe.

Psalm 24 speaks of His glorious return as the King of Kings.  Scripture tells us that He will return to the Mount of Olives and enter Jerusalem.  Today, the Eastern Gate is sealed.  But the psalm tells us,
Lift up your heads, O you gates.
And be lifted up, you everlasting doors!
And the King of Glory shall come in.
Who is this King of glory?
The LORD (YHVH), strong and mighty.

This King of Glory is indeed returning soon.
But let's not forget one of the most famous of the psalms, Psalm 23.  Sandwiched between the Suffering Servant Psalm and the Returning King Psalm is a beautiful passage that comforts us and assures of of His presence while we wait for Him to return.  Additionally, we need our Good Shepherd because like sheep, we are restless, prone to wander, always searching for greener grass, and to often oblivious to danger. 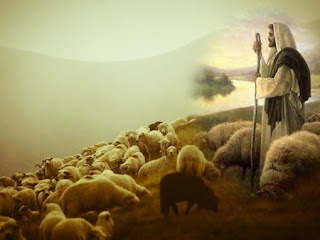 Let the familiar words wash over you today as you read them.

The LORD is my shepherd; I shall not want.
He makes me to lie down in green pastures;
He leads me beside the still waters
He restores my soul;
He leads me in the paths of righteousness for His name's sake
Yea, though I walk through the valley of the shadow of death,
I will fear no evil
For You are with me
Your rod and Your staff, they comfort me.
You prepare a table before me in the presence of my enemies
You anoint my head with oil;
My cup runs over
Surely goodness and mercy shall follow me all the days of my life
And I will dwell in the house of the LORD forever.

This beautiful psalm ends with the prophecy that leads right into His glorious return in Psalm 24.  Forever we will dwell with Him!
Posted by Gratefully Grafted In at 9:39 AM No comments: