Watchmen on the Walls

I just returned from my third trip to the place where the Lord God has chosen to put His name - Jerusalem.

At the beginning of the trip, I asked Him for eyes like the servant of Elisha - to be given a glimpse into the heavenlies and the spiritual warfare going on over His holy city.  Then I waited and watched.

Throughout this trip, we were interceding for Israel - through prayer, worship, dance, and supporting our friends here.

We were blessed to be here for the day they celebrate called Shavuot. Biblically,  this is one of the three pilgrimage feasts required in the Levitical law.

For the Jewish people, it is a grand celebration of the giving of the Torah on Mount Sinai. Many stay up all night studying Torah,  and the celebration continues all day. [Believers in Yeshua commemorate the giving of the Holy Spirit on this same appointed day of Shavuot, aka Pentecost, as recorded in Acts 2].  As the festival drew to a close, we joined the thousands of worshippers at the Kotel, or Western Wall. They were dressed in their best and had come to the Wall to pray.

As I was praying for the Holy Spirit and the revelation of Yeshua to fall on these chosen people, God drew my attention to two groups of birds at the Wall.

On the right side of the wall where I was, in the women's section,  four doves were nestled in between the stones, keeping watch. The stalwart doves did not move the entire time I was there. They silently kept watch. 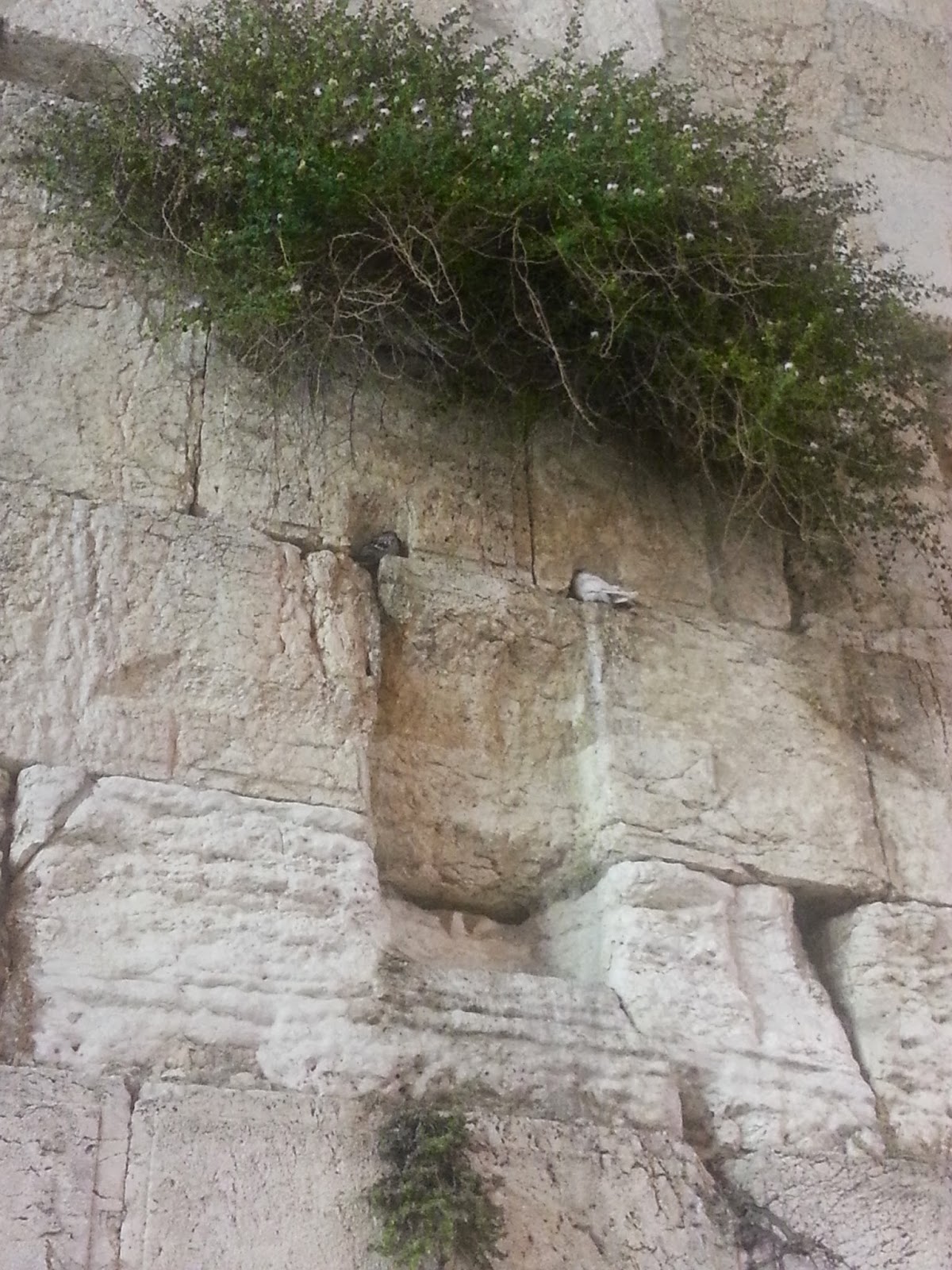 Meanwhile, to the left, a loud contingent of noisy birds made a ruckus. They appeared to be causing trouble as they swooped back and forth to the wall, screeching loudly, darting and disappearing like cockroaches into small openings between the stones.

At first I thought they were bats, but a team member told me they were barn swallows. Loud little buggers.
I was in awe as I watched the picture of spiritual warfare going on right in front of me.  (The dove is a symbol of the Holy Spirit.)

Several nights later, we came again to the Kotel to pray.  The doves were still faithfully keeping watch in their places, unmoving and stalwart.  The loud, angry birds from the previous night were nowhere to be seen.  What a picture of God's steadfast watch over His chosen people, as He waits for His perfect timing to reveal Himself to them.  Meanwhile, the enemy noisily plots and schemes against them, all in vain.

The Lord did not answer my prayer in the way I had asked Him.  Instead of giving me a glimpse into the spirit world, He chose to use the natural world to answer my prayer.  I know that the picture in the heavenlies is much bigger, but God in His mercy gave me what He knew I could handle.
Posted by Gratefully Grafted In at 4:38 AM No comments: