The Priesthood of John

John the Baptist.  It doesn't sound like a very Jewish name... he sounds more like a Presbyterian.  But who was he, and what did he represent?  I was listening to a recent message by Jonathan Cahn and wanted to share some of his amazing insights.

First, let's go back a bit.

In Genesis 22, Abraham was asked to sacrifice his beloved son Isaac.  It was a test, which Abraham passed. Scripture records Abraham declaring that the Lord would provide Himself a lamb.  At the time, the Lord provided a ram (notice, not a lamb - yet).  The ram was caught by its horns in a thicket of thorns.  On that day, one ram was substituted for one man.


Fast forward to the children of Israel, enslaved in Egypt.  On the night of their escape, we see the sacrificed lambs providing salvation for each family through the blood on the doorpost.  On that night, one lamb provided for one family. 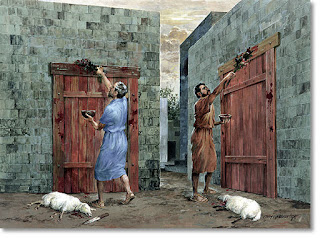 Fast forwarding again, we see the rise of the Levitical priesthood and the tabernacle and temple worship.  The  Levite priests would sacrifice the Passover lamb (and also the Yom Kippur goat, as well as other sacrifices througout the year) on behalf the entire nation.  At Passover, the lamb had to be examined and declared to be an acceptable sacrifice by the priest. On that day every year, one lamb was sacrificed for the nation.


Do you see the progression so far?  So what does John the Baptist have to do with any of this?

John was the miracle child of Zechariah and Elizabeth.  Zechariah, as we know, was a Levite and a priest.  His wife was also of the tribe of Levi.  Any son of theirs would also be a priest according to the law of Moses.

The two of them remained barren for many years, so that the hand of the Lord would be clearly evident when the time came.  Zechariah was visited by Gabriel while offering incense in the temple.  This was a once-in-a-lifetime event for a priest, to be called upon to enter the Holy Place and burn incense, and this was Zechariah's time.  It is no surprise that the Lord used Zechariah's time of major significance to announce another event of major significance. 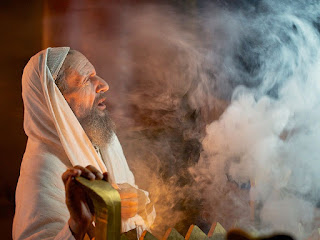 Zechariah means The Lord Remembers.  Elizabeth means The Oath of the Lord.

The son's name would be Yochanan (John).  It means The Lord is Gracious.

There had been about 400 years of silence from the Lord, and now His hand was moving.   Yehovah had not forgotten His people.  Their names tell the story:  The Lord remembers His oath.  How gracious He is!

Baby John is the first to celebrate the Messiah.  Remember how he leapt in Elizabeth's womb when newly-pregnant Miriam (Mary) arrived at her home?  A prophetic moment for sure.  Yeshua's forerunner - announcing Him even from the womb!

Fast forward many years.  John is immersing repentant people in the Jordan River.

Side note:  Baptism (a Greek word) was nothing new.  Jews had been immersing for years.  It was an outward sign of cleansing, of new birth (and emerging like a newborn), of the start of something new.  Each time they worshipped at the temple, they would first visit a mikveh.  (Hundreds of these mikvot have been excavated all over Israel, including around the Temple Mount and also where the Essenes lived by the Dead Sea, and it is thought that John lived as an Essene for awhile).

So anyway, John the Immerser is going about his business, preparing people for something new. Malachi 3:1 speaks of him:   I will send my messenger, who will prepare the way before me. Then suddenly the Lord you are seeking will come to his temple; the messenger of the covenant, whom you desire, will come,” says the Lord Almighty.

Suddenly, Yeshua appears at the Jordan River, and what does John say?    John 1:29 records it: “Look, the Lamb of God, who takes away the sin of the world!" 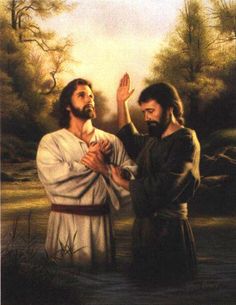 The oath of the Lord, made in Genesis 3:15, is about to take place.  The head of the serpent is about to be crushed.

There is also great significance to the Jordan River.  But that is another post, coming soon.

Posted by Gratefully Grafted In at 9:31 AM No comments: