So you'd think that after a long flight and a long day of touring, I'd sleep like a baby.  But I laid awake that whole night in Netanya.  Adrenaline, maybe?  The idea that I am in ISRAEL and I still can't believe it?  Who knows?

My fear was that I would be sleepy all day after a night like that.  Not so.  There was so much to do on Day 2 that it didn't occur to me to be tired.

We hopped on our bus, and our first stop was Cesaerea Maritime, just a little further north on the coast from Netanya.  The city was founded by Herod the Great, who achieved great wealth through this port city that he built and then named after Caesar Augustus.  The "great" doesn't describe his personality; it refers to the fact that he was a great builder.  But frankly, he was a total jerk.  He killed his sons out of paranoia that they would take his throne.  He killed his favorite wife Mariamne because the Jews loved her so much (but not him).  And he ordered the savage butchery of all baby boys in Bethlehem, after hearing from the visiting wise men that the King of the Jews was prophesied to be born there.  There was a Roman saying that it was better to be Herod's pig than his son.

But I digress.  The reason Herod became so wealthy through the port of Cesaerea because he built all sorts of free entertainments for the sailors so that they would come to HIS port instead of to Jaffa.  It worked.  He built an amphitheater for theatrical productions, gladiator games, and other such amusements.  He built a hippodrome for chariot races.  (In Greek, hippo means horse and dromos means race... thus the hippodrome.)   The soldiers couldn't sail during the winter there, so Herod made sure they were comfortable in Cesaerea during those months.  Oh, and every good port has plenty of warehouse space for the imports and exports.

Our next stop (after a picnic lunch at a Mt. Carmel cemetary) was Nazareth.  Back in the 4th century, the Emperor Constantine had an experience where he supposedly converted to Christianity.  His mother, Helena, built huge churches on every single spot that was purported to be a moment in the life of Jesus.  The Church of the Anunciation is one such church, which was built in Nazareth.  Was it the spot where Gabriel made the announcement to Mary?  Probably not.  I didn't take any pictures inside, because frankly, there were just too many idols in there for my taste... statues that people kiss, bow down and pray to, and then leave their monetary offering.

Nazareth is an Arab town.  After 1948, a Jewish settlement was built on a nearby hill and named Nazaret Ilit.  So as we were walking through the Arab market toward the Church of the Anunciation, our tour guide told us the story of the pope who was to visit a few decades ago.  The muslims in Nazareth were going to build a huge mosque to cover up the church.  The Catholic church got involved, and the plan was shut down.  But the muslims tried to get in the last word by erecting this billboard in front of the church: 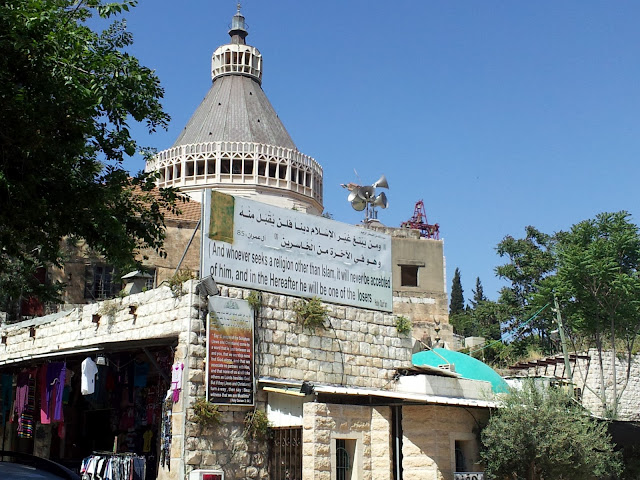 My favorite part of Nazareth was Mt. Precipice.  It was supposedly the spot where in Luke chapter 4, the angry Nazarenes were going to drop Jesus over a cliff after he claimed to be the Messiah in the synagogue.  The view from Mt. Precipice was breathtaking, overlooking the Jezreel valley and surrounding towns.

We then headed over to the Sea of Galilee area and made a stop at the Jordan River.  Not the place where John was baptizing and where Jesus was baptized, but it was the place that tourists go anyway.
﻿

After seeing the Jordan, and spending lots of quality time and shekels in the touristy gift shop, it was time to venture to the hotel in Tiberias, on the west side of the Sea of Galilee.

Posted by Gratefully Grafted In at 7:24 PM