Assignment for the day:  painting!

Gordon was part of a team that helped paint the apartment of a lovely lady named Marcelle.  She was a quadripeligic who had a live-in caregiver, but she was such an encouragement!  She always had a smile on her face, and her love for the Lord was so apparent.

At the same time, another lady and I went to help paint the apartment of a Russian immigrant lady, Zoya.  We didn't get to meet her, but we met her cat.  This particular kitty was not a people-cat.  It hissed and hacked at us - good thing it was locked up in a caged area while we were there.


After we finished with the painting, we went and fetched lunch for the rest of the crew at Marcelle's.  We stopped at a Shawarma-and-Falafel place, which is the typical Israeli fast food joint.  Did I mention that we ate a lot of shawarma and falafel while we were in Israel?

After finishing up at Marcelle's place, we headed over to the Jerusalem Assembly, where a ribbon-cutting ceremony and reception for the kids was scheduled.  They were kicking off the new grassy rooftop, which the children now will have access to for playtime and lesson time during services, instead of always being cooped up indoors.


After the reception, we were free for the evening.   After dinner at the hotel, Gordon and I had an opportunity to meet with a wonderful couple - his boss's nephew and nephew's wife - who live in Jerusalem.  They were so sweet, and we spent several hours with them just getting to know them. 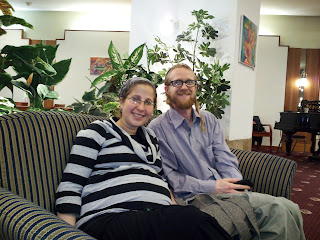 Later, several of us decided to venture out for a walk, and we strolled to the Melech David (King David) Hotel which was a half a block away.  This is the hotel where dignitaries stay (with rooms going for $2700 a night, they are very effective at keeping the riff-raff such as myself out of them).  They had a long walkway inside that had signatures on it... from Winston Churchill to Billy Graham to Barak Obama.

We then walked out onto the lovely back terrace.  We could hear the strains of the Hava Nagila coming from some distance away, so we decided to check it out.  A bar mitzvah celebration was underway on a remote patio area for a young man named Daniel.  We were fascinated, so we stood at a distance and watched the festivities.  Suddenly, a hip lady in a white dress invited us to come in for a drink to help celebrate her grandson's bar mitzvah.  So cautiously, we entered the event and tried to blend in...  ha ha... we did such a good job that the event planners descended upon us with the hotel management, declaring that this was a private party.  We assured them that Daniel's grandmother had invited us in.  We didn't stay much longer, but it was really fun to see that event.
﻿
﻿
﻿﻿

\
Posted by Gratefully Grafted In at 8:30 AM