After his peace meal with Laban, Jacob heads out in the morning and is met by angels of God. These same angels, or malachim, are the ones that appeared to Jacob on his way out of the Promised Land, ascending and descending the stairs.  And they probably remain with him, unseen, the entire time he is gone.

Upon this second encounter with them, Jacob names the place Mahanaim.  What was Jacob seeing that he gave the place that name? Two companies of angels? The name means double camp.


Jacob's life is about to change.

Jacob sends a message to Esau, telling his messengers exactly what to say to his brother in verses 4 and 5:
Speak thus to my lord Esau, ‘Thus your servant Jacob says: “I have dwelt with Laban and stayed there until now. I have oxen, donkeys, flocks, and male and female servants; and I have sent to tell my lord, that I may find favor in your sight.”

Twice in his little speech, Jacob humbly refers to Esau as his lord, which means master.   He is assuring his brother that he has plenty of goods and has no wish to dispossess Esau of anything.

The messengers return with a simple message:

Esau is coming to meet you with 400 men.

He knows he has the covenant promise to him from God, but he doesn’t have the details.

He must be wondering, is this going to be a big fat war?

Immediately, he divides his camp into two camps.  Remember the prophetic name that Jacob had already given the area upon seeing the angelic messengers?  He formulates a double camp.

We then have another biblical first: the first recorded prayer from man to God in verses 9-12.
Then Jacob said, “O God of my father Abraham and God of my father Isaac, the Lord who said to me, ‘Return to your country and to your family, and I will deal well with you’: I am not worthy of the least of all the mercies and of all the truth which You have shown Your servant; for I crossed over this Jordan with my staff, and now I have become two companies. Deliver me, I pray, from the hand of my brother, from the hand of Esau; for I fear him, lest he come and attack me and the mother with the children. For You said, ‘I will surely treat you well, and make your descendants as the sand of the sea, which cannot be numbered for multitude.’ ”

Jacob humbly professes his unworthiness, and he respectfully confesses to God his fear of his brother Esau and asks for deliverance from his brother. And twice, he gently reminds the LORD of His covenant promises to him and his offspring.

Don’t be afraid to talk to God about whatever is on your heart. He knows anyway, and yet he wants to hear from us.  I often remind God of His promises when I pray. I have an adult child who is wandering from God, and his name happens to mean the LORD remembers. So you bet I bring his name up to God!

So Jacob then assembles a little present for his brother - over 550 animals - and sends them on ahead in little groups, led by servants, and again tells them exactly what to say to Esau. But Jacob himself remains behind, overnight in the double camp.

Before going to bed, he gathers up his wives and sons and sends them over the ford of Jabbok.  Jabbok means emptying, or pouring forth.

Then what happens? It gets dark.  Verse 24 says,
Then Jacob was left alone; and a Man wrestled with him until the breaking of day.

In Hebrew we see a word play that is not evident in the English.

Jacob wrestled with God at the Jabbok river, and they are all almost the same word in Hebrew. Jacob, wrestle, and Jabbok.  It almost sounds like Jacob Jacobed at Jacob.

So much is happening in this wrestling match.

First of all, we are told that the Man wrestles with Jacob, not the other way around.

Jacob wrestles all night with the Man, and is doing really well until the very end. At that point, he gets his hip knocked out of joint by his Opponent.  Ding. 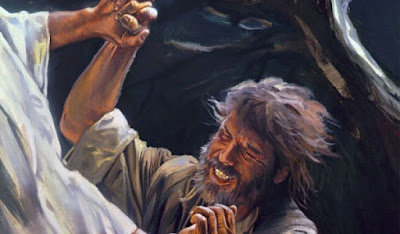 And after wrestling, Jacob asks his Opponent for a blessing.  (Imagine you are a prizefighter, and you've just been knocked out by Mike Tyson.  Hey Mike, can I have a blessing from you?)

His Opponent asks him, what's your name?
(He already knows, of course.)

Can you imagine how Jacob feels when he has to answer?
My name is Jacob.  Heel grabber.  Supplanter.  Deceiver.

Then the blessing follows in verse 28 with another first mention:
And He said, “Your name shall no longer be called Jacob, but Israel; for you have struggled with God and with men, and have prevailed.”

His name was changed to Israel, mentioned for the first time here.  It is a name packed with meaning:  means struggles with God, contention, God prevails, and also prince with God.

What a name for Jacob, and for the nation of Israel as well.

Jacob names the place Peniel which means face to face with God.  Jacob is actually wrestling with Yeshua here, in a pre-incarnate appearance. 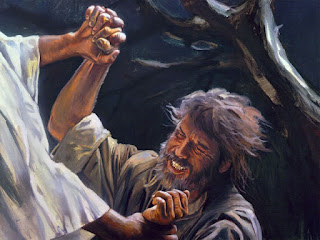 The struggling happens at night. It is a dark situation. Jacob wakes up ready to face Esau and his 400 men. Did you ever notice that everything looks better in the daytime?

This account is a picture of our struggles that we have against the flesh, and when we come to the end of ourselves, we surrender. Just a touch from God, and then we are in a position for His blessing!

The wrestler came and blessed Jacob by putting his own name into the new name of Jacob.  In the same way, God in the form of the Holy Spirit, indwells us when we place our trust in Him.

In his life, Jacob contended with a lot of people - with Esau, with Isaac, with Laban, and eventually with his own sons. He usually wins, but this time, he does not come out ahead. Jacob is humbled, brought to the end of himself, and then he is blessed. He is a new creation after the LORD wrestles with him in the dark.

I think of the apostle Paul, and how the LORD wrestled with him on the road to Damascus and changed him. This wrestling and surrendering represents our own born-again experience.

Jacob walked with a limp the rest of his life.  We too walk differently after a touch from the LORD.  We walk for the rest of our life in His strength, not our own.  And yet, until He returns, we still struggle with the flesh. 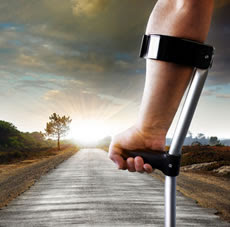 I've heard people who don't believe in God say that religion is a crutch.  Hmm.  Frankly, they are not far off.  But it isn't religion that is our crutch.  It is the LORD Himself.

One online definition of the word crutch is this: something that a person depends on to help deal with problems.

Posted by Gratefully Grafted In at 12:50 PM