The main thrust of the book of Genesis now switches focus to the story of Joseph, beloved son of Rachel and Jacob.  His story will greatly impact the destiny of the house of Israel.

Why Joseph? Will the covenant go through him? The twelve sons have not yet been shown who will carry on the promised seed. Joseph is being set up here as a type... a picture of the suffering Messiah who is to come. And indeed, he will be the one to physically save the line of Israel in what comes next. Without the story of Joseph, Israel perishes.


At age 17, we see that little Joe is out in the fields with his half brothers, the sons of Zilpah and Bilhah.  It seems that Leah's sons were somewhere else at this point.

So Joseph is hanging out with Gad, Asher, Dan, and Naphtali.  The Hebrew term suggests that Joseph is the senior shepherd.  We don't know exactly what those older brothers were doing, but Joey brings a bad report to his father about them.

I'm sure they did not appreciate the little tattletale.

Not only that, but verse 3 tells us that Israel loves Joseph more than the others because he is the child of his old age.  (Notice that Jacob is called by the covenant name Israel here. And hey!  What about Benjamin?)

Joseph is also given a fancy schmancy tunic by his dad.  This tunic is highly symbolic - it is a sign of a father's great favor.  (The favoritism is getting thick in here!) 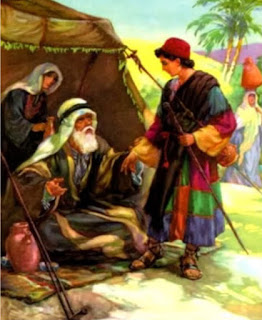 In Joseph’s day, everyone had a coat. These coats or cloaks were used to keep warm, carry belongings and even to serve as security for a loan. Most are reported to have been very plain, about knee length, and with shorter sleeves - they were merely functional. In contrast, the coat Jacob gave his son was colorful, ankle length, long-sleeved, and probably more in keeping with what royalty wore - it was beautiful.

By verse 4, we see how much his brothers already despise him.  So you can imagine their reaction to what follows next.

Beginning in verse 5,
Now Joseph had a dream, and he told it to his brothers; and they hated him even more. So he said to them, “Please hear this dream which I have dreamed: There we were, binding sheaves in the field. Then behold, my sheaf arose and also stood upright; and indeed your sheaves stood all around and bowed down to my sheaf.”

Dang.  Put yourselves in the shoes of those brothers, who already think he is a spoiled brat.  (Is Joseph purposely being a brat here?  Given the integrity of his later life, I think he is just being honest with them).

Interesting that sheaves of wheat are the main feature of his first dream.  It connects Joseph's story to food and famine.

In verse 8, their hatred grows:
And his brothers said to him, “Shall you indeed reign over us? Or shall you indeed have dominion over us?” So they hated him even more for his dreams and for his words.

It gets worse, at least from the brothers' perspective:
Then he dreamed still another dream and told it to his brothers, and said, “Look, I have dreamed another dream. And this time, the sun, the moon, and the eleven stars bowed down to me.”

So he told it to his father and his brothers; and his father rebuked him and said to him, “What is this dream that you have dreamed? Shall your mother and I and your brothers indeed come to bow down to the earth before you?” And his brothers envied him, but his father kept the matter in mind. 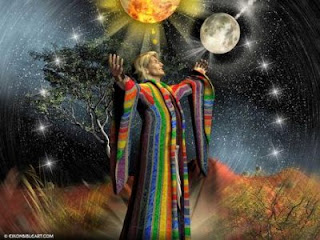 Whoa.  Now even dad is in the fray, expressing his surprise at Joseph's dream an he rebukes him.  I find it interesting that Jacob mentions Joseph's mother at this point, who has already died.  Clearly Jacob believes in the world to come.

The sun, moon, and stars are mentioned together numerous times in scripture.  In Genesis they show up on day four of creation, and one of their purposes is to signal God's appointed times.

And speaking of the world to come, they also show up in the last book of scripture, when Revelation 12:1 says,
Now a great sign appeared in heaven: a woman clothed with the sun, with the moon under her feet, and on her head a garland of twelve stars.

Something much bigger than spoiled little Joseph is in the works here.  We are talking an entire destiny of a people group; a destiny that ultimately affects the entire world.

The chapter continues in verse 12, when the brothers go up to Shechem to feed their flocks.  Shechem is about 48 miles north of Hebron, where Jacob, Joseph, and probably Benjamin currently are.

And for some reason, Jacob sends his favorite boy on a three-day journey to check on his brothers, to see if they are well.  Joseph responds with hineini- I will go.

So Joseph heads north, and not finding them in Shechem (maybe the Shechemites remember the slaughter?), heads to Dothan based on a tip from a local tour guide.  Note:  Dothan means two wells.  Dothan is about another twelve miles north of Shechem.

As Joseph approaches, the brothers see him coming.  Here comes that master of dreams, they sneer, which indicates their main beef with their brother.  Immediately, they plot to get rid of the little twerp.  Their evil plot includes murder.

However, Reuben the firstborn steps in and saves his life.  In verse 22, he uses the ruse, let's put him in a pit, fully intending to return Joseph to their father.

Bravo, Reuben!  His actions are not enough to earn back his standing as the firstborn, however, especially because his plan is foiled.  For some unbeknownst reason, he departs from the scene of the intended crime.

The actions of the remaining brothers continue, as they strip the hated tunic from Joseph and throw him into an empty cistern - perhaps one of the two wells of Dothan?

Then they sit down to dinner.  Could they hear Joseph's shouts from the well as they calmly eat their meal?

As they eat their meal, they see a caravan of Ishmaelite traders from Midian (Arabia) in the near distance.  One of the little details here is that the Arab traders are carrying spices, balm, and myrrh - products used for embalming.  Death spices.

Judah, not wishing to have his brother's blood on his hands, convinces the brothers to sell him to those traders of death spices.  So they do - for twenty shekels of silver.  According to one online estimate that I found, that is about $400 in today's money.

Thirty shekels of silver was the going rate for a slave.  Joseph becomes a slave to Egypt at a reduced price.  How little the brothers valued Joseph's life!

At this point, Reuben returns, and finding Joseph gone, rips his clothing.  This is a traditional action of great mourning, usually done when someone dies.  Jews still do this symbolically today when a loved one dies.  Another symbol of death.

The tunic - that symbol of his father's great favor - is dipped in blood.  The sons of the deceiver set out to deceive Jacob.  When Jacob sees the bloody tunic, he goes into deep, deep mourning.  His beloved son is dead, or so he thinks.

Can you say dysfunctional family?

The story of Joseph is one of the great prophetic pictures of our Messiah.  This chapter just scratches the surface of that picture.  Look at this list so far:
Chapter 37 ends with an introduction to the next part of Joseph's story:
Now the Midianites had sold him in Egypt to Potiphar, an officer of Pharaoh and captain of the guard.

It is interesting to note that the Hebrew word for officer is actually means eunuch.  It was a great honor to serve the ruler of Egypt, but a person had to be willing to give up a great deal.

Before the story of Joseph continues, it is first time for a little history lesson in chapter 38.