About halfway through chapter 30, the childbearing saga takes a pause and we now come to the account of Laban and Jacob. and the flocks, beginning in verse 25.

Jacob puts in a transfer request after Joseph is born.  He wants to go home.  His additional seven years of labor has probably just been completed at this point.

Laban knows what side his bread is buttered on.  He knows that his prosperity is due to Jacob.

So he resorts to begging in verses 27-28:
And Laban said to him, “Please stay, if I have found favor in your eyes, for I have learned by experience that the LORD has blessed me for your sake.” Then he said, “Name me your wages, and I will give it.”

The expression learned by experience is actually the Hebrew word nachash, which means to practice divination, observe the signs or omens, or to hiss.  It is actually the same word used of the serpent in Genesis 3.

Laban divined through magic that the LORD has blessed him.  Laban is mixing up his idols here and attributing them to God.  Scripture tells us that Laban is also a worshipper of idols.

Anyway, Jacob agrees with Laban that, yes, he is the reason Laban has prospered.  But Jacob wants to provide for his own house like any red-blooded man would.  So they work out a deal that really won't cost Laban anything.

In fact, Laban must think he is getting a sweet deal, as we can see in verse 34:
And Laban said, “Oh, that it were according to your word!”

In other words, oh heck, yeah!

Speckled and spotted goats were rather rare in the Middle East, as were the dark lambs which were usually solid white.

And then in verse 35, Laban walks through the flocks and separates all the speckled and striped animals and the brown lambs.  Sneaky Laban then puts these animals in the care of his own sons!  He is going to make sure that not many little spotty-speckly animals come to be via the genetics of their parents.  What a rip-off artist.  Too bad Laban didn't understand genetics and recessive genes, nor the will of the LORD.

Laban and his sons bolt with those animals that should have been Jacob's, putting three days' journey between themselves and Jacob, and leaving Jacob in charge of Laban's solid-color animals.

Then the story gets weird.

In verse 37, Jacob takes rods of trees:  fresh, new branches from white milky trees and almond trees, and then he peels white strips into the rods.  He then sets these strips before the solid flocks as they come to drink water. 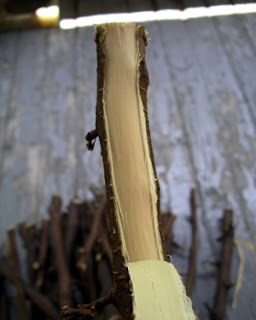 In the Hebrew, we see that word for white again twice - Laban.  The same as Laban's name.  Remember how the word for white can mean both purity and deception?  Good grief - these two guys seem to keep going back and forth with their plans of deception.

Somehow Jacob thinks this will make them conceive and bear the spotty animals that he needs.  Was this another ancient superstitious custom, like the mandrakes?  Frankly, I don't know.

Of course, it is not the white strips that cause the animals to reproduce in a way to benefit Jacob, it is the will of God.

People have tried to scientifically reproduce this whole thing with white strips of bark to bring on spotted animals, and it doesn't work.

The word for speckled can also mean to mark by puncturing.

Do we see a prophetic picture here?

In verse 33, Jacob makes  this statement:
So my righteousness will answer for me in time to come, when the subject of my wages comes before you:

Hints of Yeshua are all over the place.

A few verses come to my mind.

Romans 6:23
For the wages of sin is death, but the gift of God is eternal life through Messiah Yeshua, our Lord.

Psalm 51:7b
Wash me and I shall be whiter than snow.

Isaiah 53:5-6
But He was wounded for our transgressions,
He was bruised for our iniquities;
The chastisement for our peace was upon Him,
And by His stripes we are healed.
All we like sheep have gone astray;
We have turned, every one, to his own way;
And the Lord has laid on Him the iniquity of us all.

The LORD provided a way for Jacob's livelihood, just as He provides a way for our eternal livelihood today through Yeshua, the pure, unspotted Lamb who took upon Himself the marks that we deserve.

There is an interesting modern story regarding Jacob's sheep.  The breed disappeared completely from the Holy Land about 2000 years ago, vacating the land at around the same time the Jews were kicked out in 70 AD.

A Jewish Canadian couple began raising these sheep on a whim in British Colombia (they were not farmers).  Long story short, God put it on their hearts to bring these sheep home to the Holy Land.

On November 30, 2016, the first 119 of these sheep landed in Israel.  (How would you have liked to be on that flight?  Time for your meal... and out come bales of hay).  On the Hebrew calendar, the date was the 28th of Cheshvan, the day that Noah exited the ark.  Thirty of the ewes were pregnant.

The first offspring of these sheep were born in May of 2017, the first in the land in nearly 2000 years. 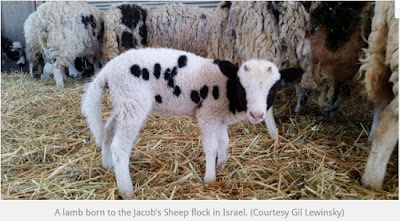 Posted by Gratefully Grafted In at 10:28 AM