Picking up in verse 16 of chapter 35, it is time for the company to head out.  Jacob and his clan head south, toward Ephrath (Efrat).

It isn't a very long trip... only about 10-11 kilometers.  But somewhere en route, Rachel's water breaks.  She goes into labor.  Hard labor, the scripture tells us.

I've heard of children being born in taxi cabs and such in our modern day, but on a dusty camel train?  Ugh.

The caravan probably grinds to a halt.  And we don't know exactly what goes wrong, but Rachel has a very difficult time of it and she dies.  Knowing she is dying, she sorrowfully names her child Ben-Oni, or son of my sorrow.

But Jacob, although he must be devastated over the loss of his beloved Rachel, overrules the name and calls the boy Benjamin, meaning son of the right hand.

(Small rabbit trail:  there are 700 Benjamites in Joshua 20 who are noted to be left-handed.  Coincidence? I think not.)

Rachel is buried in Bethlehem, and Jacob sets a stone pillar as a memorial on her grave.  Jews continue this tradition of stones on graves to this day.  I love the idea of stones on graves instead of cut flowers.  They are a symbol of eternity.  Maybe this is why I like rocks so much, and often haul them home from travels to various places.


The company of Jacob then picked up and traveled a little further onward, to Migdal Eder, or the tower of the flock.  The only other place this term is used is in Micah 4, in the midst of a prophecy regarding the coming Messiah in Micah 4 and 5, a Ruler of Israel who would someday be born on this very spot.

Now we come to another verse that seems out of context, and, well, frankly - awkward:
And it happened, when Israel dwelt in that land, that Reuben went and lay with Bilhah his father’s concubine; and Israel heard about it.

There appears to be no immediate reaction by Jacob, but we will see it mentioned at the end of Genesis when Jacob blesses (prophesies over) his sons.  The event also gets a mention in 1 Chronicles 5.

Chapter 35 then goes straight into the genealogy of Jacob's sons, Reuben being noted as the firstborn.  I believe that Reuben's treachery was mentioned so that we can understand why it is Judah, the fourth-born, who receives the blessing that should have gone to a firstborn.  We already know why it does not pass to Simeon and Levi because of the bloodshed at Shechem.  Reuben's actions cause him to be passed over as well.

Chapter 35 ends with the reunion of Jacob and Isaac at Hebron.  We don't know how long Jacob dwells with Isaac, but when Isaac is 180 years old, he breathes his last.  Esau shows up from Seir (another reunion) and the brothers bury their father at the same place as Abraham and Sarah - the cave of Machpelah.

Esau probably sticks around with the fam for at least a little while and then he heads home to Seir.  And the next chapter of Genesis is then devoted to him and his progeny.

Why?  Because he is a child of Abraham.  Genesis 25 had given us a brief overview of the sons of Ishmael and the sons of Keturah for the same reason.  Esau's family tree is also given a shout-out in 1 Chronicles chapter 1.  But the biblical narrative switches radically and almost exclusively to the children of Jacob, from whence will come the Seed of the Woman and the Redeemer of the World.

So. just for fun I tried to draw out Esau's lineage based on Genesis 36 and 1 Chronicles 1. 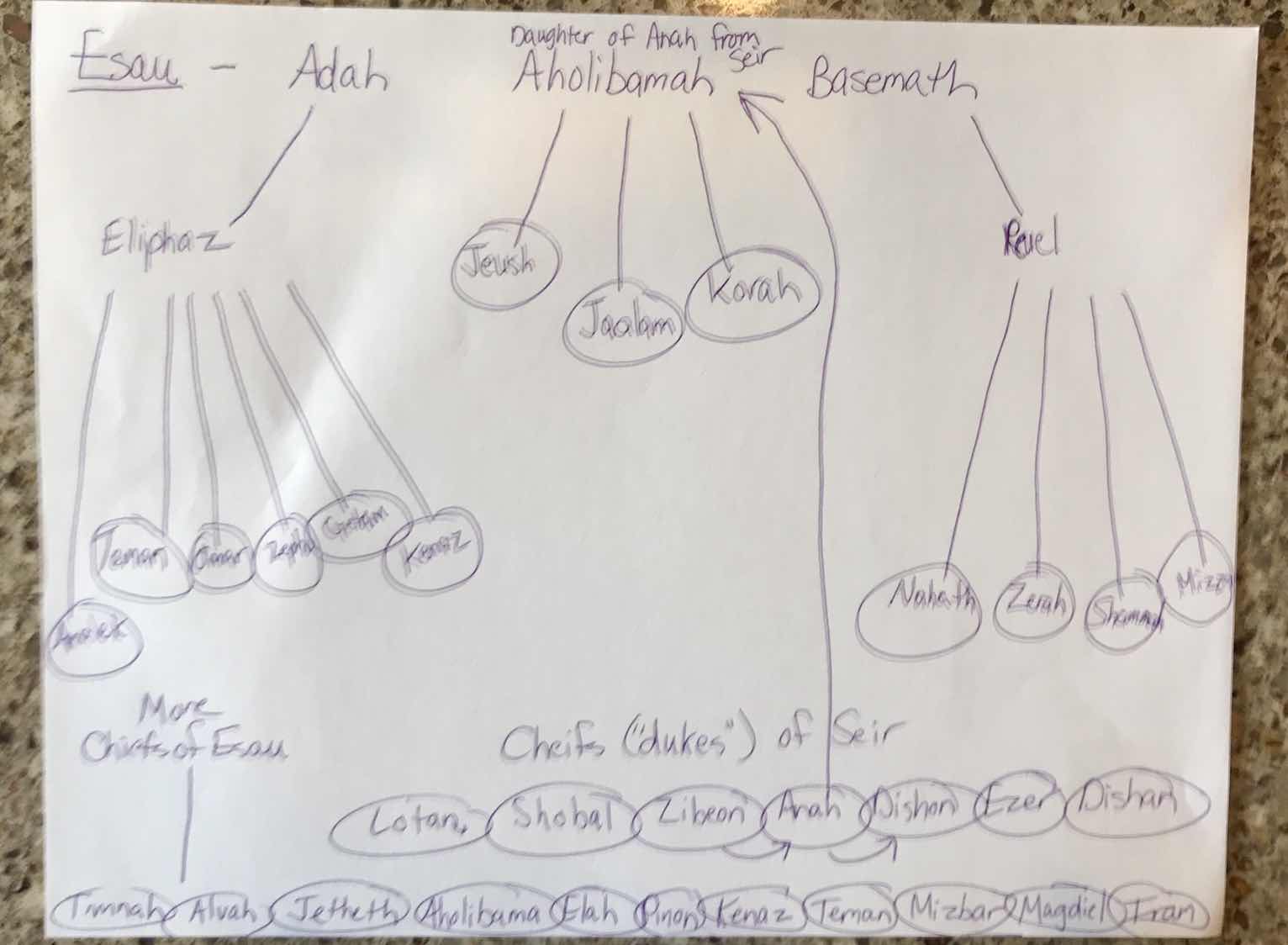 It wasn't easy.  It was so mixed with the sons of Seir.  I think that perhaps that is part of the point of this chapter... contrasting the mixed family of Esau with the set-apart children of Israel.  I finally gave up trying to create an accurate family tree of Esau.  One of the Hebrew word for mixed is Arab.  It is the same word as erev, or sunset, which also carries the meaning of chaos.  Not light and not dark.  Twilight.


Some of these names  of Edom's family show up later in scripture.  For instance, Eliphaz the Temanite shows up in the book of Job.  The Amalekites certainly show up later on when the LORD tells Saul to destroy them all in 1 Samuel 15.  Saul disobeys and spares King Agag.  Eventually the prophet Samuel steps in and hacks Agag to pieces (oh, how colorful is the word of God), but not before Agag somehow has a chance to procreate.  One of Agag's descendants - Haman - shows up in the book of Esther, and we know how that went!

I must pause for a moment, and address my struggle with verse 6.
Then Esau took his wives, his sons, his daughters, and all the persons of his household, his cattle and all his animals, and all his goods which he had gained in the land of Canaan, and went to a country away from the presence of his brother Jacob.

Wait!  Jacob flees from his brother right after finagling the blessing of Isaac away from Esau.  And when they are reunited in Genesis 33, Esau is already a bigwig in Seir.  So how does he somehow depart from the presence of Jacob?

I could not reconcile this.  The various commentaries left me more confused.  So I gave up and went to get ready for my day. (I often blog while in pajamas).  As the hot water was pummeling my head, I sent up a prayer for clarity.  And just like the situation in my last post with Deborah the honeybee, insight came in an instant.

This is what came to me.

When Rebekah sends Jacob away, she anticipates that it will only be for a few days, till Esau's anger has abated.  Jacob probably flees with not much more than the tunic on his back, leaving the bulk of his possessions behind.

Meanwhile, Esau's shepherds and Jacob's shepherds (much like Lot's and Abraham's shepherds back in Genesis 13) are trying to manage their respective flocks in an arid land.  Jacob's flock would be double the size of Esau's due to the double portion allotted to the son with the birthright.  Esau, partly due to his anger at what just happened with Jacob, and also due to being a hunter by nature, decides to head to the wilds of Seir, thinking, to heck with the hometown!  Departing from the presence of Jacob simply means leaving behind all those irritating reminders of his brother.

And Esau's departure is God-ordained, as we see in Deuteronomy 2:5, Joshua 24:4, and other places.  It was God's intent all along to remove Esau from the Promised Land and also to give Seir to Esau.  And Esau becomes a bigwig himself - head honcho of the land of Edom.

Eventually, the Edomites become enemies of Israel, and the entire book of Obadiah is a prophecy against them because of how they treat the children of Israel - both in their trek from Egypt and in their eventual exile.  Rivkah's prophecy of the warring twins in her womb is fulfilled. 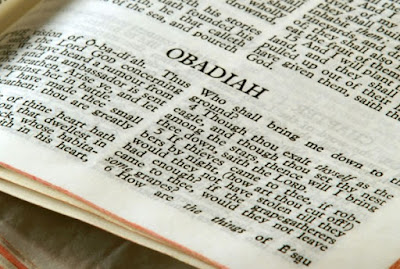 The story continues to unfold!  Click here to continue.
Posted by Gratefully Grafted In at 8:12 AM