Just when the Joseph story is getting good, we now get a word from our sponsor, so to speak.

Chapter 38 seems to be a random change of subject.  But of course, nothing is in scripture by random; everything means something.

The story of Joseph is important because of God's bigger picture.  We see the nation of Israel take form and grow while enslaved in Egypt, and we see their ultimate deliverance from Egypt, which is a metaphor from sin.  We need to know how they got there.  So while Joseph's life is in many ways a foreshadow of the Messiah, he is not in the line of the Messiah.

The lineage of the Seed who would deliver Israel (and the world) is a key biblical doctrine; so God inserts this account of the Messianic line right into the middle of the Joseph story.

And oddly enough, there is a bit of a parallel to the Joseph story, in which God took an evil situation and used it for good.

The story of Judah and Tamar is completely countercultural to us.  Some strange stuff is about to go down.

The first thing I want to note is that Tamar is the first of five women listed in the genealogy of Yeshua in Matthew chapter 1.  Each of these five women mentioned there - Tamar, Rahab, Ruth, Bathsheba, and Mary - have a unique and unusual role to play in the Messiah's lineage.


Chapter 38 opens with Judah departing from his brothers.  We read that he goes to hang out with his pagan friend Hirah the Adullamite.  A total pagan.

Judah is probably fleeing from his father's great sorrow over Joseph's disappearance.  Can you say guilty conscience?  His life seems to be taking a downward spiral as he leaves his family behind and takes up residence with the Canaanites.

Hirah the Adullamite isn't a great influence on Judah.  Through that friendship, Judah marries a Canaanite woman, whose name we are not told.  This woman produces three sons for Judah - Er, Onan, and Shelah.

In verse 7, we are told,
But Er, Judah’s firstborn, was wicked in the sight of the LORD, and the LORD killed him.

The next couple verses highlight an ancient practice - levirate marriage - that even predates the Sinai covenant, although the practice was later codified under Mosaic Law.

The next born, in this case Onan, is told by Judah to marry the widow and give her a child that would give an heir to Er.  Onan does not want to do produce an heir for his brother that would receive his father's double portion, so he redirects his seed to the ground.

Then this, in verse 10:
And the thing which he did displeased the LORD; therefore He killed him also.

Biblically, one of the worst thing that could happen to you is that your name be blotted out of God's book of life.  The concept is foundational to the way Jewish people celebrate the fall holy days today.  They believe they have ten days to make amends with people, so that their name is written in the Book of Life for another year.

Here are three samples of God's book of life from the Tanach:


Psalm 69:28 says, May they be blotted out of the book of life and may they not be recorded with the righteous.

And in Exodus 32:32-22, after the golden calf episode, we read, But now, if You will, forgive their sin—and if not, please blot me out from Your book which You have written!” The Lord said to Moses, “Whoever has sinned against Me, I will blot him out of My book.

And in Daniel 12:  Now at that time Michael, the great prince who stands guard over the sons of your people, will arise. And there will be a time of distress such as never occurred since there was a nation until that time; and at that time your people, everyone who is found written in the book, will be rescued.

The term book of life also appears in the New Testament - once in Philippians and seven times in Revelation.

God has placed this desire for eternal things into us, as Ecclesiastes 3:11 tells us.  We humans have an innate desire for significance, to be remembered, to make a name for ourselves.  It is why we name hospital wings after donors, and why we build towers to the heavens (Genesis 11:4), and why we cheer for the hometown sports teams.  And I confess:  I made a donation to a certain museum once so that I could have my name written in Jerusalem.


In the Bible, a person's name and lineage is important.  Perhaps Tamar acts as she does because she knows this.  Perhaps Tamar also knows about God's promise of a Redeemer that was to come from the family of Jacob.

Well, Judah's two older boys are dead, and he is probably thinking that Tamar is some kind of black widow spider.  Judah sends Tamar back to her father's house in humiliation, promising his younger son to her when he gets old enough.

But alas, the son gets old enough, Judah's wife dies, and Judah does not make good on his promise to Tamar.

Once again, he teams up with his Adullamite friend and goes off to Timnah to shear sheep.  And Tamar hears about it.  She takes action that to us seems bizarre.

More deception in the family of the deceiver.

Tamar dresses like a temple prostitute and lures Judah into an encounter.  He names a price - a goat - which he doesn't happen to have on him.  Somehow she convinces him to give her some very important items as a deposit - his signet which hung by a cord, and his staff.  The signet is something by which Judah would have left his signature on something.  The staff is a symbol of Judah's authority and would have been carved specifically for him.  It would be the equivalent of giving Tamar his driver's license and social security card.

How strange that Judah is so easily talked out of these important items.

They part ways after the encounter.  Tamar goes back to her father's home, dressed once again in her widowhood garments.  Judah goes home to procure the goat and get his belongings back.  But alas, he cannot find her, even after searching and asking around.

Three months later, he hears through the grapevine that his daughter-in-law is pregnant by harlotry.

Judah is furious and calls for her to be burned.  Of course, she produces Judah's possessions and he is immediately convicted, as we see in verse 26:
So Judah acknowledged them and said, “She has been more righteous than I, because I did not give her to Shelah my son.” And he never knew her again.

The chapter concludes with an unusual birth:

Now it came to pass, at the time for giving birth, that behold, twins were in her womb. And so it was, when she was giving birth, that the one put out his hand; and the midwife took a scarlet thread and bound it on his hand, saying, “This one came out first.”  Then it happened, as he drew back his hand, that his brother came out unexpectedly; and she said, “How did you break through? This breach be upon you!” Therefore his name was called Perez. Afterward his brother came out who had the scarlet thread on his hand. And his name was called Zerah.

Tamar is a hero here, because not only does she produce twins for Judah to replace the two sons that he lost, but she also rescues Jacob from his downward spiritual spiral amongst the Canaanites.

And of course, one of her babies - Perez - gets to carry on the seed of Messiah.

I love the name Perez (pronounced Peretz).  It means to breach, break forth, or to break out.

It is a word used in Micah 2:13, in a near/far prophecy that describes the two comings of the Messiah:

The one who breaks open will come up before them;
They will break out,
Pass through the gate,
And go out by it;
Their king will pass before them,
With the LORD at their head.” 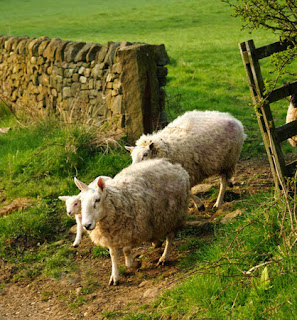 Matthew 11:12 is referring to this passage in Micah, describing Messiah's first arrival, although most translations word it poorly:
And from the days of John the Baptist until now the kingdom of heaven suffers violence, and the violent take it by force.

Sadly, this verse has been misunderstood and has often been used to justify violence throughout church history.  But it means that the kingdom of God is perez-ing!  Breaking out!  John the Baptist is the one that breaks open the gate, and the King the King will pass before them.

Today, we are waiting for the Kingdom to break out in all its fullness when the Messiah returns in glory.

That scarlet thread.  It shows up here for the first time when it is placed on Zerah's wrist.  It is a theme that runs throughout scripture, and represents redemption through the blood of Messiah. 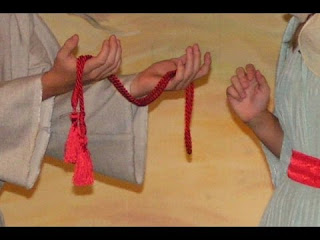 Click here to continue.
Posted by Gratefully Grafted In at 3:03 PM