Chapter 33 opens with Jacob lifting his eyes and seeing his brother.

It is quite possible that Esau really did intend to harm Jacob. After all, Rebekah had said she would send for Jacob when Esau’s anger abated. She never did.

Also, Esau’s return message to Jacob is rather terse. I’m coming, with 400 guys.

If this is the case, then we see that clearly God answers Jacob’s prayer from the previous night and changes the heart of Esau. Had Jacob met Esau the day before, sans the divine wrestling match, the result might have been quite different.

I’m reminded of Queen Esther’s two dinners in a row for Hamam and the king. Something happened between the two dinners to change everything.

But still, Jacob takes no chances. He arranges the moms and kids according to his preference, putting the maids out front and Rachel and Joey in back. Favoritism again.

He then goes out front and bows seven times to his brother. In ancient times, it was a custom to do this before kings. Jacob is greatly humbling himself before his brother. Groveling, even. 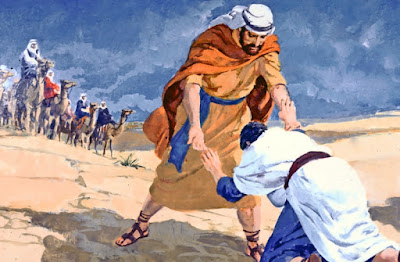 (Esau had moved his family to Seir, so it was quite possible that he had become a king of his own domain.  Eventually, there was an entire area known as Edom in what is today the nation of Jordan.  And Edom was Esau's nickname after selling his birthright for the red stew.)

Jacob had just confronted Laban boldly after Laban caught up with him. Why is he so timid now? Probably because he knows he had been in the wrong when he deceived his brother so many years ago, whereas Laban, who had repeatedly deceived Jacob, was the one in the wrong.

And yet Jacob demonstrates boldness be stepping out in front of his entire company of wives and children. That boldness probably came after wrestling with the LORD. His hip infirmity word have prevented him from running away  had Esau attacked.  He was totally vulnerable before his brother.

Jacob had changed but he still struggled with his carnal nature. For the rest of his life, the scriptures refer to him both as Jacob and Israel.

And then a happy sight:  Esau runs to Jacob and throws his arms around him. All animosity from the previous 20 years is gone.

Jacob probably expected to die, but his brother hugs him, and they weep together. 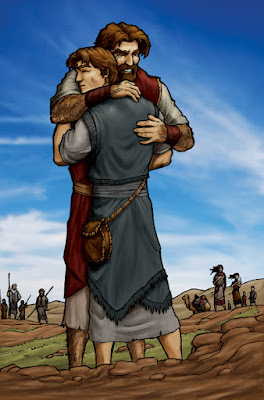 It’s like the happy ending of a chick flick.

Esau has been blessed over the years as well as Jacob, so he doesn't want to accept his gift of livestock. Jacob know how important Esau's acceptance would be, so he convinces him to receive the gift.


In that culture, one never accepted a gift from an enemy, only from a friend. To accept the gift was to accept the friendship.

So in verse 12, Esau invites Jacob to travel along with him as he leads the way.

Jacob immediately comes up with a bunch of excuses in verses 13-14.  Maybe he really is concerned about his kids and his animals going too fast to keep up with Esau or maybe he just really doesn't want to travel with Esau.  Seeing as Jacob then promises to catch up with him (and then never does) tells me that he is still just a little bit afraid of his brother.  And Edom isn't the Promised Land, which is where Jacob is heading, carrying the Abrahamic Covenant upon him.

Esau even wants to give Jacob some servants to help him out in his journey, but Jacob basically says, thanks, but no thanks.

The brothers part in peace, but the prophecy given to Rivka about the two warring nations in her womb is still to come through their descendants. See the book of Obadiah, and Malachi 1:2.

Before crossing the Jordan, we have a pause in the journey in verse 17.
And Jacob journeyed to Succoth, built himself a house, and made booths for his livestock. Therefore the name of the place is called Succoth.

The word sukkot (or succoth) means booths, or tabernacles - temporary shelters.  The seventh Biblical feast given from the LORD to Moses at Sinai is given the same name:  Feast of Tabernacles, or Sukkot.  I always knew that Sukkot was a memorial of the LORD dwelling with His people in the wilderness after being delivered from Egypt in Exodus, but we can also remember that the LORD was with Jacob/Israel as he was about to return to the Promised Land here in Genesis.  It also has a future application when the Messiah will return to dwell with His bride. 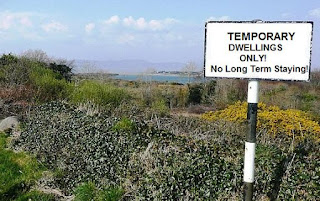 We don't know how long Jacob remained in Succoth, but the chapter wraps up with his re-entrance to the Land.

Jacob then pitches his tent in Shechem, which is modern-day Nablus, right between Mount Ebal and Mount Gerazim.  He then purchases the land upon which he pitches his tent, from a local guy.  The chapter ends with worship, when Jacob builds an altar and called it El Elohe Israel... literally, God, the God of Israel.

Click here to continue.
Posted by Gratefully Grafted In at 8:00 AM