Now Abraham was old, well advanced in age; and the LORD had blessed Abraham in all things. So Abraham said to the oldest servant of his house, who ruled over all that he had, “Please, put your hand under my thigh, and I will make you swear by the LORD, the God of heaven and the God of the earth, that you will not take a wife for my son from the daughters of the Canaanites, among whom I dwell; but you shall go to my country and to my family, and take a wife for my son Isaac.”

Remember, Isaac had "disappeared" after the near-sacrifice account in chapter 22.  He now shows up on the scene again, as his father prepares to acquire for him a bride.

This oath was a serious oath.  The hand under the thigh, or loin, was actually a reference to the covenant of circumcision.

In verse 2, we are told of Abraham's chief servant, who was previously named Eliezer in an earlier chapter, but remains mysteriously nameless here.  Eliezer means my God is help.  He would have been Abraham's heir if not for Isaac.  But here in the text, he remains nameless.

The covenant child needs a wife for the promise to continue.  God's plan cannot unfold without more generations showing up.

Isaac's mom has just died, and he is about 40 years old.  He misses his mom.

The helper questions Abraham... What if she doesn't want to come with me?  Should I bring your son with me?  The script continues:

But Abraham said to him, “Beware that you do not take my son back there.  The LORD God of heaven, who took me from my father’s house and from the land of my family, and who spoke to me and swore to me, saying, ‘To your descendants I give this land,’ He will send His angel before you, and you shall take a wife for my son from there.

Isaac was the only patriarch who never left the land.  See how the land was and is part of the plan as the covenant continues to unfold to the next generation? The land was promised to His chosen people.  Today the world wants to take away that land.

Anyway, Abraham sends his unnamed helper to his people back in the mother country.  Remember, the geneology was set up for us back in chapter 22.  Why not any wife?  Why not a Canaanite bride?

He needs a wife from his called out people.  We have a similar warning in the new covenant:  don't be unequally yoked.

The miracles continue as the story unfolds.

The unnamed servant then takes a bunch of camels and heads to the city of Nahor in Mesopotamia.  He makes a specific request of the LORD:

Then he said, “O LORD God of my master Abraham, please give me success this day, and show kindness to my master Abraham. Behold, here I stand by the well of water, and the daughters of the men of the city are coming out to draw water.  Now let it be that the young woman to whom I say, ‘Please let down your pitcher that I may drink,’ and she says, ‘Drink, and I will also give your camels a drink’—let her be the one You have appointed for Your servant Isaac. And by this I will know that You have shown kindness to my master.”

Look at verse 15:  before the servant finishes speaking, the LORD was already answering his prayer, exactly as the servant was asking.

It is a good reminder to be specific when you pray, so that you can see God's specific answers.

I am reminded of a time when I had a flat tire on my rental car in Jaffa.  After attempting to change it (unsuccessfully) ourselves amid rising panic, we started praying.  The jogger who stopped to help us came over before our prayer was even finished1

This gal at the well is very beautiful, we are told in verse 16.  And why wouldn't she be?  She was related to another great beauty, Sarah (who was her great-aunt).

By the way, have you ever watered one camel, let alone 10?  Camels hold a lot of water.  They can actually drink 53 gallons of water in three minutes.  There is a reason they are called the ships of the desert.

So let's just say that Rivkah (Rebekah) was a hard-working young lady.  She was also hospitable, gracious, and kind to a stranger, just like Abraham was.  In other words, wife material.

The unnamed servant then pleads his cause before Rebekah's family.  He explains his prayer and how it was precisely answered.

Then Laban and Bethuel answered and said, “The thing comes from the LORD; we cannot speak to you either bad or good. Here is Rebekah before you; take her and go, and let her be your master’s son’s wife, as the LORD has spoken.”

We see another example of instant obedience.  But first, they ask the bride herself.  Verse 57-58 show us this:

Then they said, “Let’s call the young woman and ask her about it.” So they called Rebekah and asked her, “Will you go with this man?”

More instant obedience.  She had never seen or spoken to her future bridegroom, but she listened to the story told by the unnamed servant, saw the faithfulness of God, and acted upon it.  We also are given a choice regarding our Bridegroom before we see Him face to face.

This unnamed servant is a prophetic picture of the Holy Spirit.  In Yeshua's absence from us at this time in history, the Holy Spirit is Yeshua revealed.  The One that speaks to our hearts, teaches us, comforts us, points us to the Bridegroom and testifies of Him.  The Helper.  (Remember the meaning of Eliezer?).

Based on the testimony of the unnamed servant, Rebekah takes her handmaidens and leaves her family, even though she has not yet laid eyes on her bridegroom.

Perhaps this is why our testimony of Yeshua is so important.

What a sweet meeting they have in the field as Rivkah approaches Isaac.  Their eyes meet.  She puts on her veil in reverence. 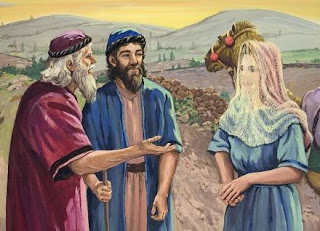 Isaac marries Rivkah and he loves her.  This is the second appearance of the word ahava (love) in the scriptures.  The first is at the sacrifice, the second is at the wedding.  And between the two events, the unnamed servant is at work, joining the two together.

This is a beautiful picture of how Yeshua's sacrifice for His future bride is completely immersed in love.  And how the Holy Spirit of God is at work, joining Yeshua and His bride together.  Have you said yes to your Bridegroom yet?

Posted by Gratefully Grafted In at 9:49 AM