Chapter 27 is another explosive chapter, showing the unfolding plan of God in the midst of human foibles.

The chapter opens up with Isaac fixing to get his affairs in order before he dies.  He is old and blind and wants to settle things with his favorite kid.

He says to Esau, go make me my favorite goat stew, which I love.  And then I'll bless you and then die.

Isaac doesn't know that Rebekah overhears everything.  He is simply doing what people did in the ancient world.  And remember, the LORD had given the prophecy about the twins to Rebekah, and not to Isaac.  It is quite possible that she had never told him that the older would serve the younger.

(But maybe Isaac did know the prophecy. In that case, was it not Isaac who was trying to be deceptive, to force his own will so that his favorite son would prevail?)

So anyway, Rebekah takes action, probably knowing what she must do.

She approaches Jacob, tells him what to do, and insists that he obey her.  Dress up like your brother, impersonate him, feed your dad, and get that blessing.

Jacob even argues with her a bit, afraid it may end up as a curse for him, but his mom convinces him to do it. She assures him that any curse will be upon her, and not him.  In other words, she is willing to take all the blame.

Man, these matriarchs!  They sure know how to take charge.  Sarah sending Ishmael and Hagar away, and now this.  I just went and looked up the meaning of Rebekah... it means ensnarer.  Hmm. 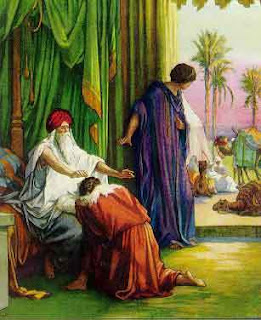 Jacob runs to the flock, brings his mom an animal, and she gets cooking.  Meanwhile, she dresses Jacob up in Esau's clothes, and then covers him with the skins of the very animal she is cooking up.

I wonder if Jacob feels nervous as he approaches his father.  This blessing from a father is kind of a big deal.

Here is the dialogue between them, recorded in scripture for all the world to see:

So he went to his father and said, “My father.”
And he said, “Here I am. Who are you, my son?”
Jacob said to his father, “I am Esau your firstborn; I have done just as you told me; please arise, sit and eat of my game, that your soul may bless me.”
But Isaac said to his son,
“How is it that you have found it so quickly, my son?”
And he said, “Because the LORD your God brought it to me.”
(Ooooh, Jacob plays the God card here)

Isaac said to Jacob, “Please come near, that I may feel you, my son, whether you are really my son Esau or not.”  So Jacob went near to Isaac his father, and he felt him and said, “The voice is Jacob’s voice, but the hands are the hands of Esau.”  And he did not recognize him, because his hands were hairy like his brother Esau’s hands; so he blessed him.

Isaac is convinced, and gives Jacob a lovely blessing that he intends for his firstborn beloved son.

The blessing, which is really a prophecy, wraps up with a reference to the Abrahamic Covenant:
Let peoples serve you,
And nations bow down to you.
Be master over your brethren,
And let your mother’s sons bow down to you.
Cursed be everyone who curses you,
And blessed be those who bless you!”

With that, Jacob departs from the presence of his father, and in comes Esau.

Isaac realizes then what just went down.  In verse 33 he says,
Then Isaac trembled exceedingly, and said, “Who? Where is the one who hunted game and brought it to me? I ate all of it before you came, and I have blessed him—and indeed he shall be blessed.”

Isaac trembles greatly because he now knows this was the will of the LORD.  He says that it cannot be changed.

What does Esau do?  He tells a couple lies of his own. Jacob? That deceiver of apt name?  He has now deceived me two times, taking away my birthright and my blessing!

Number one:  Jacob did not deceive Esau out of his birthright.  Esau cared little about it, willingly giving it up because of his greedy stomach.

Number two:  Jacob deceived Isaac regarding the blessing, not Esau.

(The blessing also differs from the birthright in that the blessing establishes the double portion of the father's inheritance, usually reserved for the oldest.  As we will soon see, one of Jacob's children will receive the blessing, and another the birthright, and in neither case is it the oldest son.  God's sovereignty is what matters - what He says, goes.).

Esau whines and begs for a blessing of his own. Isaac can only bless Esau with prophetic words given to him from the LORD:
“Behold, your dwelling shall be of the fatness of the earth,
And of the dew of heaven from above.
By your sword you shall live,
And you shall serve your brother;
And it shall come to pass, when you become restless,
That you shall break his yoke from your neck.”

Esau is NOT HAPPY with his blessing, to put it mildly.  We are told that Esau now hates his brother and that he plans to kill him as soon as his father dies.

Rebekah finds out Esau's plan.  She tells Jacob to flee in order to save his life.  But this is not what she says to Isaac.  No, instead she brings up Esau's annoying wives, saying that she does not want Jacob to end up with one like that.  I wonder why she didn't tell Isaac the truth?  Perhaps she knew that Isaac would just shrug it off as a sibling quarrel.  However, she is a woman of action.

Thus ends chapter 27, filled with drama and deception.  How does God allow His covenant to continue amidst it of this craziness?

Because He has grace.  He continues to love us and use us in His kingdom in spite of our mess-ups and hang-ups.  None of this came to Him as a surprise, and He allowed it to pan out the way it did.  His plan continues not because we are righteous, but because He is righteous.

Posted by Gratefully Grafted In at 11:59 AM