And the LORD visited Sarah as He had said, and the LORD did for Sarah as He had spoken. For Sarah conceived and bore Abraham a son in his old age, at the set time of which God had spoken to him.  And Abraham called the name of his son who was born to him—whom Sarah bore to him—Isaac.  Then Abraham circumcised his son Isaac when he was eight days old, as God had commanded him. Now Abraham was one hundred years old when his son Isaac was born to him.  And Sarah said, “God has made me laugh, and all who hear will laugh with me.” She also said, “Who would have said to Abraham that Sarah would nurse children? For I have borne him a son in his old age.”

There was much laughter surrounding his conception and birth. Abraham had laughed in joy, then Sarah had laughed in disbelief, now she laughs again after he is born, this time with profuse joy!


It is interesting that Abraham's age is mentioned in this passage, but not Sarah's.  It was more of a miracle that SHE had the baby.   Maybe this is why nobody ever asks women their age. We know from other passages that she is 90 years old when she gives birth to Isaac.

This birth is completely supernatural.  It isn't just that Sarah is old.  She was completely barren during her childbearing years.

The whole manifestation of the Abrahamic Covenant is bathed in the miraculous, and not in the natural. More miraculous births will happen in this line, as we will soon see, and the eventual miraculous birth in the line of the covenant is the birth of the Messiah.

But even today, we have another supernatural birth...  The birth of Israel in 1948 was a miracle, foretold in the scriptures.  Remember what Isaiah 66:8 says?
Who has heard such a thing?
Who has seen such things?
Shall the earth be made to give birth in one day?
Or shall a nation be born at once?
For as soon as Zion was in labor,
She gave birth to her children.

And also you.  You must be born again… our own rebirth is a supernatural event. 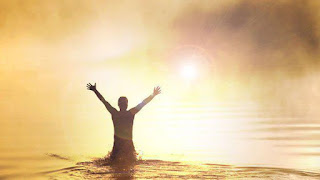 And now for a contrast, the text goes right to the account of Ishmael and Hagar in verse eight.

When Isaac was about three, he was weaned.  Abraham throws a giant party to celebrate.  (Or maybe Sarah convinced him to do it?)

Sarah sees the son of the Egyptian woman making fun of the whole thing.  The Hebrew word for mocking or scoffing is tsachach, which ironically comes from the same root word as Yitzak.  It is a mocking laughter.

Ishmael, a teenager, is mocking the supernatural.

Well, you don't mess with moms and their kids.  Even the animal kingdom demonstrates this.  Bears don't bother you unless they have a cub with them.

The root of anti-Semitism had begun when Hagar despised Sarah. And now, her son is mocking Sarah‘s son. It continued generationally, and it continues today, some 4000 years later.

Hagar is called the Egyptian here. This is a contrast to the promised land. We have a picture of the son of the slave woman, and the son of the free woman, the allegory of which comes up in Galatians 4:21-31.  It is a snapshot of how Yeshua freed us from the law of sin and death and allows us to walk in freedom from it.  Look at how this seed, planted in Genesis, plays out:

Tell me, you who desire to be under the law, do you not hear the law? For it is written that Abraham had two sons: the one by a bondwoman, the other by a freewoman. But he who was of the bondwoman was born according to the flesh, and he of the freewoman through promise, which things are symbolic. For these are the two covenants: the one from Mount Sinai which gives birth to bondage, which is Hagar—  for this Hagar is Mount Sinai in Arabia, and corresponds to Jerusalem which now is, and is in bondage with her children—  but the Jerusalem above is free, which is the mother of us all. For it is written:
“Rejoice, O barren,
You who do not bear!
Break forth and shout,
You who are not in labor!
For the desolate has many more children
Than she who has a husband.”  (Isaiah 54:1)

Sarah says that the son of the slave woman is not going to share in the inheritance of her son.  Abraham was not happy with the situation, but YHVH tells Abraham to do whatever Sarah says because it is Isaac that the covenant will continue.  And then the LORD reminds Abraham that Ishmael will also become a nation, because he too is Abraham's seed.

The entire scriptures give us a theme about separation between the common and the holy. God is not being mean here, he is giving us a picture of that truth.

We were all born of Egypt until we got born again... the natural, then the spiritual. We were born sons of the slave woman, and we supernaturally became saved, the sons of the free woman.

Remember however, the Abrahamic Covenant is  NOT temporary, but was given by YHVH as an everlasting covenant.

So anyway, in verse 14, Abraham sends Ishmael and Hagar away.

We see that Hagar and Ishmael are desolate in the wilderness of Beersheva.  Hagar weeps at the hopelessness of her situation.  But then the LORD shows up to her again, as He did so many years earlier when she was expecting Ishmael.  He gently reminds her that Ishmael will become a huge nation, and He graciously provides for them.

Ishmael became an archer (a hunter) and his Egyptian mom found him an Egyptian wife.  (Islam is rooted in Egyptian-ness).

Ishmael was an archer.  Could this be a throwback to Nimrod the mighty hunter?  In an upcoming chapter, we will see Esau as a hunter, too.  There are three hunters in Genesis, and all are negative.  But then there is Abraham, a shepherd.  And Isaac is a mild man, staying near tents.  Then you have Moses the shepherd and David the shepherd, and then we have the Good Shepherd.  There may be a spiritual lesson here on hunters vs shepherds.  All the good guys were shepherds.

Chapter 21 wraps up with a fight over water, and then a treaty between Abraham and Abimelech, the same king we saw in chapter 20.  Abimelech actually sees that God is with Abraham in everything, so he wants to be his BFF.

They figure it out the water issue and make an oath, calling it Beersheva, or well of the oath, or well of the seven.  This covenant of peace between Abraham and Abimelech was kept until the time of Samson.


Then Abraham plants a tamarisk tree.  The Hebrew word is eshel, or grove of trees.  It is a symbol of settling down, making roots.

And then Abraham gives YHVH a new title:  YHVH El Olam.  This us usually translated eternal or everlasting God, or YHVH, God of the universe.  It is the only place in the whole bible that this title shows up, but the Jews use it today in all their prayers... melech ha olam, or King of the Universe.

Chapter 21 ends with Abraham Living in peace with Gentiles, the mocker is gone, and Isaac is growing up.   Everything is perfect in this picture... there are no foreseeable problems, right?  And he stayed there as a sojourner for a long time.

Posted by Gratefully Grafted In at 10:42 AM