Chapter 29 covers about 20 years and contains a whole lot of action.

It opens up with Jacob departing the place of his dream.  The Hebrew literally says that he lifts his feet, which means that he is quite joyous... he has a spring in his step.  He has just been given the Abrahamic Covenant by the LORD Himself, and now he needs a wife to carry on that covenant.

So what happens next?  Just like his forebears, he comes to a well.  And we have a throwback to a girl showing up at the well, just like Jacob's mother did years before this.

(Side note:  There is a well in modern Nablus - biblical Shechem -  called Jacob's Well.  This is a well that Jacob will give to his son Joseph later on, and not the well where he meets Rachel.  Jacob's Well is not easy to visit today.  It is currently under the control of the Palestinian Authority, and a Greek Orthodox church is built over the well.  I was blessed to visit that well with an Arab pastor and take a drink of water from it.  This particular well shows up later in Scripture when Yeshua meets with the Samaritan woman at the well in John 4.)


Anyway, at the other well there are shepherds and sheep waiting, because the well is covered by a huge stone and it takes a community effort to move it.  Jacob chats with them awhile, learning about his relatives from the shepherds, and suddenly they say, "Look, there is his daughter Rachel!"

Jacob continues chatting with the shepherds, trying to get rid of them in verse 7 so that he could meet this Rachel all by himself. They do not comply.  They know they need to help with that stone.

Cue the romantic music here at verse 9:
Now while he was still speaking with them, Rachel came with her father’s sheep, for she was a shepherdess.

When Jacob sees Rachel daughter of his uncle Laban, and Laban’s sheep, he thinks to himself, hubba hubba!  He immediately goes over and rolls the stone away from the mouth of the well and waters her sheep.  Somehow, he is able to muster superhuman strength to move that stone after he lays eyes on her. 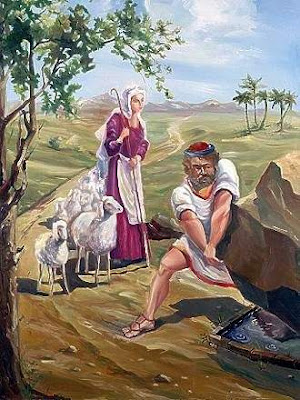 Is this simply a case of a smitten man?  Or is there something else here?

How about a prophetic picture?  (Have you noticed yet that Genesis is full of them?) There is a big stone over the water, there are thirsty sheep who need the water to live, and there is a supernatural rolling away of a stone.  Hmm.

It is interesting to note here that Jacob only watered Rachel's sheep, not the other sheep that were waiting for water.  But the well was left wide open for those other sheep.

Here we have yet another prophetic picture - the gospel going to the Jew first, and then to the nations.

Listen to Yeshua's words in John 10:4-16:
“I am the good shepherd; I know my sheep and my sheep know me— just as the Father knows me and I know the Father—and I lay down my life for the sheep. I have other sheep that are not of this sheep pen. I must bring them also. They too will listen to my voice, and there shall be one flock and one shepherd.

Jacob then does something shocking:  he kisses Rachel and weeps in verse 11.  This is a break from the tradition of women hiding behind their veils, as Rebekah did when she first saw Isaac. 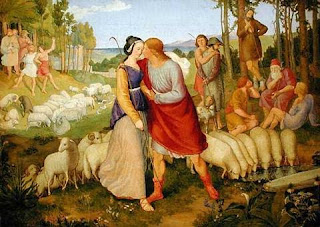 But what a lovely picture:  Our Messiah waters the sheep, kisses His bride, and there are tears of joy.

Rachel runs and tells her father what just happens, and Laban rushes to the scene and plants a kiss on Jacob.  Jacob then goes to the house of Laban.

Interjection:  Laban means white.  The idea of the color white in scripture can mean purity, but it can also mean deception.

(A couple things with the same name come to mind... Lebanon, named for the white peaks of Mount Hermon on its southern border.  And labneh - a yummy Lebanese white strained yogurt.)

Anyway, the Abrahamic Covenant continues to unfold. And what we see next is the deceiver being deceived.

Deception, in order to work, has to look white. It has to look like righteousness. Even the devil, that father of lies, is a deceiving angel of light.

Laban too is a deceiver. Biblically, white and deception occasionally have a connection. The white horse of Revelation 6 goes out to deceive the world. Matthew 24:4-5 warns us regarding the last days, do not be deceived.

In the next chapter, we will see the color white being used in deception once again.

So Jacob goes and lives at the home of Laban for a month.  Laban knows a good thing when he sees it, so he gives him a job and negotiates for the wages.

We are now formally introduced to Laban's daughters.  The older one, Leah (meaning weary), has weak eyes - a Jewish euphemism for being somewhat unattractive.  The younger one, Rachel (meaning ewe, or female lamb) is gorgeous.

Jacob develops a major crush on Rachel, so he offers to work seven years just so he can marry her.

Laban knows a good deal when he hears one, so he seals the deal.

And after seven years, Laban sneaks Leah into the wedding instead of Rachel.

I have questions about this.  Does Laban think that Leah would be spoken for in the meantime?   Does Rachel go along with this wedding?  Why is she silent? Or do they perhaps send her away during the wedding?  Does Jacob really not notice that it was Leah in the dark?  How does Leah feel about all this?  I look forward to asking them all about it someday.

Jacob wakes up, sees Leah, and is spitting mad. 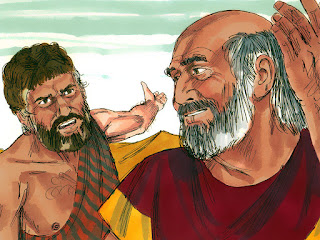 This is what he said to Laban in verse 25:
So it came to pass in the morning, that behold, it was Leah. And he said to Laban, “What is this you have done to me? Was it not for Rachel that I served you? Why then have you deceived me?”

Jacob uses the word ramah here; another word that means deception or betrayal.  Perhaps he didn't want to use his own name?

Laban plays the it's our custom card.  He then connives to get seven more years of labor out of Jacob by giving him Rachel, but only after he fulfills his wedding week with Leah.

Jacob acquiesces.  Not that he has much choice.

By the way, it remains a Jewish custom today that at every wedding, the groom ceremoniously peeks under the veil before the ceremony begins.


There are two more details that are mentioned here in this section:  Zilpah and Bilhah, two female servants who are Laban's wedding gifts to his daughters.  They are mentioned because as we know, they too have a role to play.

This little section wraps up with verse 30:
Then Jacob also went in to Rachel, and he also loved Rachel more than Leah. And he served with Laban still another seven years.

Poor Leah.  I cannot imagine.  But it sets the stage for what is to follow.

It’s time to build that assembly of people, as prophesied to Jacob by his father in Genesis 28:3.

Children are the building blocks of a nation.  Stick around to watch the family of Jacob unfold!

Posted by Gratefully Grafted In at 9:13 AM