Just like history has a way of repeating itself, we now see a similar story taking place once again in the Bible.

Genesis chapter 26 opens with another famine.  Isaac heads to Gerar (Gaza) to hang out with his dad's old friend, King Abimelech.  The LORD tells Isaac not to go to Egypt, but to stay in the land.  (Side note:  Isaac is the only patriarch who never left the land).

In verses 3-5, we see it in writing: in the midst of this famine, the LORD specifically passes the Abrahamic covenant on to Isaac:
Dwell in this land, and I will be with you and bless you; for to you and your descendants I give all these lands, and I will perform the oath which I swore to Abraham your father.  And I will make your descendants multiply as the stars of heaven; I will give to your descendants all these lands; and in your seed all the nations of the earth shall be blessed;  because Abraham obeyed My voice and kept My charge, My commandments, My statutes, and My laws.”

The Land, the Seed, and the Blessing.

In the meantime, however, look how history repeats itself.  Isaac is afraid of the king, so he claims that Rebekah is his sister.  Only this time it wasn't even a half-truth, as it was in the case of Abraham.  (Technically, they were first cousins once removed).  Well, apparently nobody came after this sister, because after they had lived in the area for a long time, Abimelech looked out his window and catches Isaac and Rebekah making out.

He is irritated with Isaac, but he'd been down this road before with Isaac's father.  But he makes sure that all his people know that Rebekah is Isaac's wife.

Isaac continues dwelling in the land of Gerar, and he prospers.  So much so that the Philistines become jealous of him.   Abimelech tells Isaac, go away.

Isaac leaves Gerar proper and heads out to a valley of Gerar.  And what ensues is another big fat battle over water.  First, Isaac digs up all the wells that his father Abraham had dug.  The Philistines had stopped up all of Abraham's wells after his death.  This seems stupid to me... why did they not use them?

But there is a modern-day tale that matches this nonsense.  In 2005, Israel caved to international pressure and uprooted 17 Jewish communities in Gaza that were known as Gush Katif.  They vacated many functional greenhouses.  Did the Arabs living in the area take them over and produce food with them?  No.  They destroyed them, along with every home and every synagogue.  SMH.  Such hatred.  (And Israel's disengagement from Gaza did not bring peace.  No, quite the opposite... thousands of rockets fired into Israel, terror tunnels, and two major wars.)

So anyway, Isaac's guys dig another well in the valley and find water, but Abimelech's guys argue with Isaac's guys, saying the water is theirs.  This repeats. 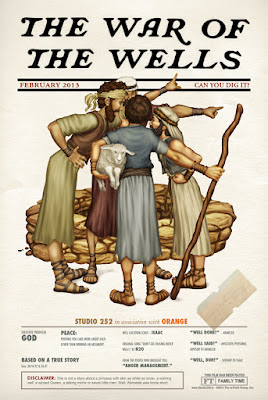 Finally, Isaac moves again, and digs a non-contested well and names it Rehoboth, which means wide places, saying, hey, there is room for all of us.  Then Isaac goes to Beersheva, where Abraham had dug a very special well.

In Beersheva. the LORD appears to Isaac again and reiterates the Abrahamic covenant to him in verse 24.  So Isaac builds an altar there and re-digs the well that Abraham dug.

From afar, King Abimelech has been watching Isaac being blessed by YHVH, so he shows up in Beersheva with a couple of his friends and gives Isaac a blessing of his own, and makes peace with him.  They party together for the evening, and then Isaac sends him and his men away in the morning.  Isaac calls the place Sheva just like his father had done, and Beersheva, meaning well of the oath or well of the seven, continues to be a thriving city in Israel today.

Basically, Esau chooses for himself a couple of pagan wives, which cause Isaac and Rebekah much grief.  The  Hebrew word translated grief is morah, which actually means bitterness.  It is the same root word that Naomi uses in the book of Ruth to rename herself Mara, because of the terrible things that had befallen her.


It is hard for me to relate to Isaac and Rebekah's bitterness, because the Lord has blessed our family with a wonderful son-in-law and a wonderful daughter-in-law, both of whom love and serve Him.

This blurb about Esau's wives leads up to an excuse that Rebekah will soon use.  But much has to happen in the meantime, so stay tuned!

Posted by Gratefully Grafted In at 9:32 AM