We now come to chapter 20, which seems to be a repeat of what happened with Abraham and Sarah in Egypt.

The same pattern shows up again. Abraham tells the same half-truth, the king takes Sarah, a plague of infertility happens, and Abraham and Sarah depart with great riches.

There are some differences, however.

Abraham had gone to Egypt because of a famine in the promised land.  Egypt is a metaphor for sin, and the big moral of that story was departure out of sin, metaphorically speaking.  This time, Abraham did not leave the land.

Also, Abimelech is open to hearing from YHVH, who shows up in a dream to the king. It is a scary dream.  Abimelech is told, The woman you have taken is married and you are about to die.

But in verses 4 and 5, Abimilech declares, Wait a minute!  The guy said she was his sister.  Plus I haven't touched her!  I am innocent in this matter!  Will you also slay a righteous nation?  (He must be referring to Sodom and Gomorrah here).

In the dream, Abimelech calls God Lord, or adonai, meaning master.  He does not know the name of God, YHVH, but he does know that this Lord is the boss.  And he has a built-in conscience that knows right from wrong... a built-in morality. He knows it is wrong to take a married woman.  And Abimelech also knows that taking Sarah would have been a sin against God Himself.

In verse 6, God affirms Abimelech's innocence and then gives him some instructions in verse 7. Give her back to her husband... he is a prophet and he will pray for you.  This is the first time the word nevi, or prophet, is used in scripture.  Abraham the prophet is about to intercede for the foreign king.

But first they have a heated discussion in verses 9-13, after which Abraham wraps up the chapter with a healing prayer for the household of Abimelech.

So why is this chapter even in our book, this basic re-run of what took place in Egypt?

This time, Abraham is not told to leave. He is already in the promised land. He gets to stay.  In verse 15, Abimelech offers him his choice of whatever land he wants (which was really nice of Abimelech but YHVH had already given it to Abe).  And then in verse 16, the king redeems Sarah with boatloads of silver, thus clearing her.

And this time, Sarah is about to conceive the promised covenant child, Isaac.  Once again, God protects the covenant.  In fact, she may have already been pregnant at this point, although we don't read about it until the next chapter.

This story highlights the attempt of a foreign king to take away the Abrahamic Covenant.  But then we see the faithfulness of YHVH to that covenant.  And we see redemption by silver.  Does that sound familiar?  It should.  Silver represents the price of redemption and shows up frequently in the scriptures. 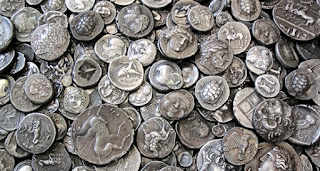 In the midst of all these human foibles, YHVH protects His everlasting covenant with Abraham, and His plan continues to unfold today.

Posted by Gratefully Grafted In at 9:51 AM