In Genesis 19, we left off where Lot and his family ran for their lives, Mrs. Lot looked back, and she became a pillar of salt.


Lot asked the LORD if he could go to Zohar, a small city.  He was not a rural dweller, preferring to live near a Starbucks instead.

Did you ever notice that it seems like the bigger the city, the greater the sin?  Perhaps because people can live anonymously there, and do whatever is in their hearts to do.  Give me a small town any day.


God allowed Lot to run to Zohar before His wrath was poured out on the area. Verse 26 says,
So He overthrew those cities, all the plain, all the inhabitants of the cities, and what grew on the ground.

The fertile plain was now in ruins.  If you have been to the Dead Sea, you know that nothing grows there.  It is truly a wilderness.  And the four remaining righteous people were now down to three.

By the way, why was Lot called righteous in 2 Peter 2:7?  He doesn't seem all that righteous on the surface when he was in Sodom.  But because of Abraham, who raised him like a son, he had faith.  And just like Abraham, he was made righteous by his faith.

If someone had wanted to make up a big story that was to be the foundation of their faith, they probably would have cleaned these guys up and made them look good.  But all their foibles were recorded the way they happened.  To me, this is another proof that the Bible is true.  I am so thankful for the examples of these imperfect patriarchs and matriarchs, especially when I mess up.


Anyway, something about Zohar did not sit right with Lot.  Perhaps because he saw the burning sulfur raining out of the sky, completely destroying the city where he had lived, Lot now might think he still isn't safe in Zohar.  So he and his daughters take off for the mountains.

Lot had became afraid. There are probably several reasons why he’d be afraid.  Maybe the trauma of the destruction of his city and his wife gave him PTSD.

So in fear, Lot goes and hides in a cave.

Now the story gets awkward to our modern ears.

One of the biggest themes in the Bible is the importance of family, geneology, and one's name.  The concept eventually got written into the Mosaic Law... if a Jewish man died leaving no heirs, his brother was required to produce an heir with the dead man's wife, in order to carry on the name of the dead man.

What was behind the tower of Babel?  Come, let us make a name for ourselves.

The worst thing that can happen in Judaism is to have your name erased from the Book of Life... it is the main theme of the fall holidays in Judaism today.  May your name be inscribed in the Book of Life for another year is the common new year's greeting.  And then they have ten days to make amends with anyone they are at odds with.

Lot's oldest daughter understood this concept. She took action.  Verses 31-33 tell us,
Now the firstborn said to the younger, “Our father is old, and there is no man on the earth to come in to us as is the custom of all the earth. Come, let us make our father drink wine, and we will lie with him, that we may preserve the lineage of our father.” So they made their father drink wine that night. And the firstborn went in and lay with her father, and he did not know when she lay down or when she arose. 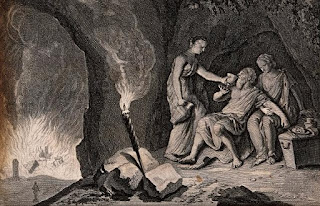 The account continues with the younger daughter following suit the next night.

And Ben Ammi means son of my people.

And this action created two of Israel‘s worst enemies… The Ammonites and the Moabites.


The Ammonites were the first ones to bring child sacrifice into Israel.

These two people groups were like thorns and Israel side.

To keep the family line, they had to bring out the wine…

But Isaac took a long long time to come forth. He was not a thorn.

However, something good did come out of this drunken night of incest hiding in a cave. Fast forward 1000 years, to the time of Judges, to my personal biblical hero, Ruth the Moabite. 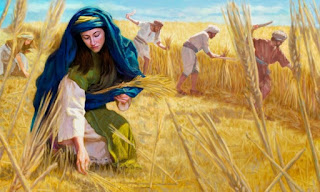 The family line that began in that cave in fear and drunkenness became the part of the lineage of King David and of Yeshua Himself.  Talk about redemption!

The story of Ruth is one of the most beautiful and messianic stories in all of Scripture.

Posted by Gratefully Grafted In at 8:49 AM