Chapter 18 starts out with a zinger:

Then YEHOVAH appeared to him by the terebinth trees of Mamre, as he was sitting in the tent door in the heat of the day.

This is the first time that the tetragrammaton - YHVH - shows up as a human being in the Word.  He visits Abraham in the heat of the day.  And there's that terebinth tree again!

Abraham beholds three visitors, whom he must have immediately perceived as divine because he bowed low before them.  He addressed one of them as Adonai, which means My Lord (always in the context of God).  Abraham, although he himself was a master to many servants, calls himself a servant of the one particular visitor - Adonai.

In keeping with Middle East custom of showing hospitality, the first thing Abraham does is take care of their physical needs... water for drinking and washing, rest, and food.

In fact, the Jewish rabbis deal with this chapter by focusing on the hospitality of Abraham, and they divert from God Himself appearing as a human. It perhaps sounds too much like Yeshua, which of course, it is.  This is one of Yeshua's numerous pre-incarnate visits to earth.

So Abraham has his servants prepare a meal for the visitor faster than a Food Network episode of Chopped, so it seems.  The ingredients in his basket were flour, milk, butter, and veal.

(It is interesting to note that Abraham mixed milk and dairy in a meal that he served to God Himself.  Perhaps the Torah command not to boil a calf in its mother's milk was a very straightforward command that meant: do boil a calf in its mother's milk, quite possibly because it used to be a pagan fertility ritual and God wanted Israel to be set apart).

Apparently the visitors enjoyed the meal very much, because what they tell him after they were done eating is great news indeed.

First, they inquire of Sarah's whereabouts in verse 9.  After being reassured that she was eavesdropping from the tent (even though He already knew it), Yehovah announces His great promise, finally!

And He said, “I will certainly return to you, according to the time of life, and behold, Sarah your wife shall have a son.”  (Sarah was listening in the tent door which was behind him.)


After 24 years of waiting, what does Sarah do?  She laughs to herself in verse 12.

Well, the LORD heard her internal laughter (proof that this is YEHOVAH in the flesh). He calls her out.  She argues.  He wins.

All this laughter over the birth of a miracle baby... Abraham and Sarah wouldn't need a baby name book, as we will see in a few chapters when Sarah's mocking laughter will turn into joyous laughter. 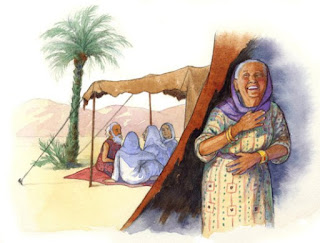 In verse 16, we see a sudden change of subject.  The men arise and look toward Sodom.  And then we see the LORD Himself about to share His plans with Abraham.

Scripture tells us in James that Abraham was a friend of God.  Because of this, and because of the great covenant which the LORD had just established with Abraham (that affects the entire world still today), the LORD shares His plan him.

The other two angelic messengers leave, but the LORD remains behind and Abraham stands before Him.

In that moment, Abraham becomes an intercessor.  He pleads for Sodom for the sake of the righteous that might be within.  Abraham begins with 50 and ends at 10.  This is where the Jewish concept of a minyan (10 men praying together) comes from.

Today, as part of God's household of faith, we also have the privilege of being intercessors before the LORD, to plead for His mercy in place of judgment.  And we don't need ten people to do it, although community prayer certainly is a powerful thing.  Abraham interceded alone.

Also, the LORD does not hide from us when he is going to do in these last days. We know that there is a righteous judgment coming soon... His word says so. Because we are children of Abraham by faith, God has shared His plan with us. We too are his friends. God shares his plans with his friends.

When Abraham finishes pleading for mercy, the LORD departs and Abraham returns to his place.  He's got a baby to father!  And the LORD has to go deal with some serious sin.

Posted by Gratefully Grafted In at 11:23 AM