We now come to the sad and tragic chapter 19.  Sodom and Gomorrah.  I'd rather skip this chapter, but alas, I cannot.

It starts out with two of the visitors who had come from Abraham's tent.

The messengers find Lot sitting in the city gate, which is very telling.  In the ancient Middle East, the gate of a city is where the leaders and important people would hang out.  Lot had become one of them, or was at least trying to be.

It is clear from the way Lot greets the messengers that he somehow knows that they are very important visitors.  And when the visitors said they would spend the night in the open square, Lot strongly insists they accompany him to his home.  Perhaps Lot knew how dangerous it would be for these two visitors to be out at night.

Lot takes them to his home and immediately shows them some good old Middle Eastern hospitality, just like Abraham had done.  An interesting detail is mentioned in the menu:  unleavened bread.  Leaven represents sin.  The meal was prophetic, in that sin was about to be dealt with!

Eventually, the perverts of the town come calling.

Lot pleads with his "brethren" to not do this thing that they threaten.  Notice, he calls them brothers.  These are his homeys.  His squad.  Apparently, Lot's squad has different goals than he does. 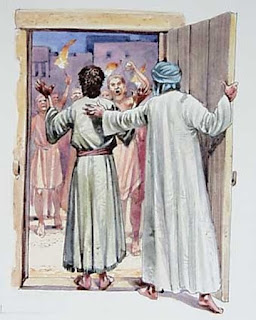 I have a hard time understanding what Lot does next... he offers his two virgin daughters to the crowd.  It sounds like a crazy thing for Lot to do, but it helps to understand an ancient custom, which was once you brought someone into your house, you were obligated to protect them.

Lot's squad turns on him and attacks him, and he has to be pulled back into his house by his visitors.  And then the LORD strikes the evil crowd with blindness.  (A lesson here:  choose your squad wisely)

Side note:  It is also possible that Lot only had two daughters, the virgin ones that he offered, and that they were betrothed to these sons-in-law.  Betrothal was as binding as marriage, if not more so.  But the virgin daughters would still have been in their father's home.

In the morning, Lot hesitates. It appears that he had become addicted to a luxurious lifestyle. He really didn’t want to go. The angels had to grab Lot, his wife, and the two daughters who lived at home. We are told that the LORD is merciful to Lot's family.  The angels tell them to flee to the mountains and don't look back!

The expression run for your lives comes from right here in Genesis.

For some reason, we find out that Lot was not a mountain man.  He begs to go to a little city (which was sure to have at least a Starbucks and a grocery store, perhaps?)  The angels relent and allow him to escape to Zoar, which means little city.

And then, this:
The sun had risen upon the earth when Lot entered Zoar. Then the LORD rained brimstone and fire on Sodom and Gomorrah, from the LORD out of the heavens. So He overthrew those cities, all the plain, all the inhabitants of the cities, and what grew on the ground.
But his wife looked back behind him, and she became a pillar of salt. 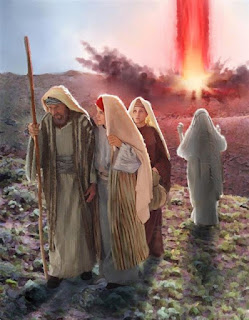 Why did she look back?   It is my opinion that Mrs. Lot was not simply curious. I believe she did not want to give up her luxury. She was looking back, yearning for it.

We then see Abraham, looking toward the ruins of Sodom and Gomorrah, and the Word tells us that Lot was saved because of his connection to Abraham.   And I believe Lot had his own measure of faith, also thanks to Abraham, who had raised him like a son.

So why did all of this happen?  Chapter 18 told us that the outcry against Sodom was great, and that their sin was very grave.

The word for outcry in Hebrew means a cry of distress. Who is crying out?  As we examine the sin of Sodom, we can see that the cries would have been both figurative (as in Abel's blood crying out from the ground) and literal - coming from the oppressed that were inside and outside of the city.

Was homosexuality the big sin of Sodom and Gomorrah?

Stay with me here. The Bible shows us that Sodom's sexual perversion was the resulting fruit of something much deeper and darker.

Look at the prophetic words of Ezekiel 16:49-50, in a rebuke to backslidden Israel:
Look, this was the iniquity of your sister Sodom: She and her daughter had pride, fullness of food, and abundance of idleness; neither did she strengthen the hand of the poor and needy. And they were haughty and committed abomination before Me; therefore I took them away as I saw fit.

Notice what comes first in Ezekiel's list of sins: Pride.  Is this why cities have their Pride fests?  How interesting that the gay agenda is driven by pride.  Did they pull the idea from Ezekiel and Genesis?  Did they intentionally steal the rainbow from the Bible, too?

Ezekiel continues.  The next sin hits closer to home for me:  fullness of food.  In other words, gluttony.  Then comes idleness, and ignoring the poor and needy.  Notice that their abominable acts were the end result.

So the people were arrogant, overfed, under concerned. They lived in careless ease. They did not help the poor, they were prideful and they did detestable things.

Can you say uh oh?  Is this our world today, or what?

In the New Testament, we see the same idea in the first chapter of Romans. Verses 18-24 say this:

For the wrath of God is revealed from heaven against all ungodliness and unrighteousness of men, who suppress the truth in unrighteousness, because what may be known of God is manifest in them, for God has shown it to them. For since the creation of the world His invisible attributes are clearly seen, being understood by the things that are made, even His eternal power and Godhead, so that they are without excuse,  because, although they knew God, they did not glorify Him as God, nor were thankful, but became futile in their thoughts, and their foolish hearts were darkened.  Professing to be wise, they became fools, and changed the glory of the incorruptible God into an image made like corruptible man—and birds and four-footed animals and creeping things.

Therefore God also gave them up to uncleanness, in the lusts of their hearts, to dishonor their bodies among themselves, who exchanged the truth of God for the lie, and worshiped and served the creature rather than the Creator, who is blessed forever. Amen.

For this reason God gave them up to vile passions. For even their women exchanged the natural use for what is against nature.  Likewise also the men, leaving the natural use of the woman, burned in their lust for one another, men with men committing what is shameful, and receiving in themselves the penalty of their error which was due.

Notice that this passage opens with God's wrath over both godlessness and wickedness.  Just as in Sodom, the sexual sin comes later and is a consequence of denying God and living for ourselves.

Look at the list of last days sins in 2 Timothy 3.
But know this, that in the last days perilous times will come: For men will be lovers of themselves, lovers of money, boasters, proud, blasphemers, disobedient to parents, unthankful, unholy, unloving, unforgiving, slanderers, without self-control, brutal, despisers of good, traitors, headstrong, haughty, lovers of pleasure rather than lovers of God. 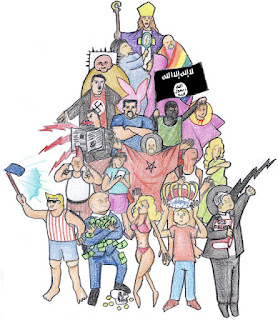 Despisers of good reminds me of Isaiah 5:20, which says,
Woe to those who call evil good, and good evil;
Who put darkness for light, and light for darkness;
Who put bitter for sweet, and sweet for bitter!

Notice that Timothy's list doesn't even mention sexual perversion.  But just like Ezekiel and Romans, Timothy mentions the sins that lead up to its final manifestation.

So what is the solution for us as believers in these last days, as an antidote to the unrighteousness of the world?  I believe a hint is given to us in the Romans 1 passage.  It tells us that the wicked people did not glorify God, nor were they thankful.

That's it!  Glorify God, and be thankful!  Worship Him alone, and with a heart of gratitude.  And then be His light in the darkness that surrounds us today.  And know that He is coming soon! 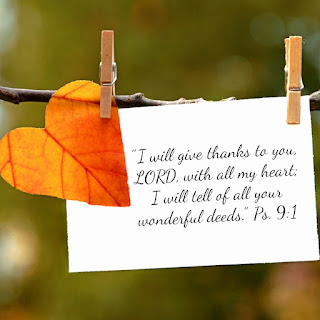 Posted by Gratefully Grafted In at 7:56 AM