Any book that is devoid of conflict is not usually a very good book. Traditionally, conflict in literature is a major literary element that creates challenges for the characters in the story.  Perhaps this literary tradition came from the Bible itself?

This ancient conflict will get worse and worse until the Messiah comes.

Verse 1 says,
Now Sarai, Abram’s wife, had borne him no children.
And she had an Egyptian maidservant whose name was Hagar.

Do you remember that Sarai's childlessness was mentioned at the end of chapter 11?  And now chapter 16 opens up by reiterating that fact. It is key to the story.

Has God ever asked you to wait for something?  If this chapter tells you anything, it's this:  Keep waiting. Do NOT take matters into your own hands.

Sarai had what we would think of today as a crazy idea, but then later on she would blame her husband for it when it did not go well.

The idea actually was not crazy in the ancient world. This was a thing that was often done in that culture. If you were not able to have children, you would have one of your servants do it for you. But in Abram's case, it was not what God intended for the seed line.

It is quite possible that Hagar was given to Abram and Sarai as a servant, as part of the riches that they received when they left Egypt. The Jewish rabbis even say that she was pharaoh's daughter, making her an Egyptian princess. We have no biblical proof of this, however.

Sarai's move was logical, but not faithful.

In verse 2, Abram heeded the voice of his wife.  I'm sure it was no great hardship for Abram to go along with Sarai's suggestion.  Hagar was probably young and beautiful. 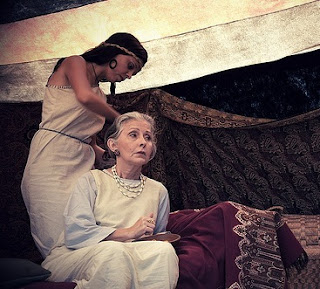 As soon as Hagar conceived she despised her mistress.  This is the birth of anti-Semitism.

Sarai then gave her blame over to her husband in verse 5, because of the conflict with her pregnant servant.  She even played the God card by saying, May the LORD judge between you and me.

Abram told Sarai to do whatever she wanted with Hagar.  (Don't you just want to say, Man up, Abe?)

This sets up an extreme event. Hagar went out into the desert and just sat there by a desert well, probably despairing over her situation.

At that moment, the angel, or messenger, of the LORD showed up for the first time in the Bible. It’s a theophany, a visitation from Yeshua Himself.  And then He said some things that were pretty crazy.

First, He told Hagar that she must return to her mistress Sarai and submit to her authority.  We will soon see that this submission will last 13 years.

And then the LORD promised Hagar that her descendants would be greatly multiplied.  I believe that this is attached to the promise that the LORD had given to Abram regarding countless descendants.

And then, He prophesied over Hagar's unborn son.
“Behold, you are with child,
And you shall bear a son.
You shall call his name Ishmael,
Because the Lord has heard your affliction.
He shall be a wild man;
His hand shall be against every man,
And every man’s hand against him.
And he shall dwell in the presence of all his brethren.”

In the Hebrew, it actually says he will be a wild donkey (or ass, for you KJV folks), and he will be hostile. In other words, a man of violence, a man of war.

We still see this prophecy playing out today through Ishmael's descendants. Islam was raised up beginning in the seventh century, but it is just now coming into its full demonically-inspired purpose. Their main purpose is to come against Israel in these last days.  Islam is anti-peace, and actually means submission.  Yeshua, on the other hand, is the Jewish Messiah, the Prince of Peace.

Hagar then called the LORD El Roi, or the-God-who-sees.   She said, I have seen the one who sees me.

The Hebrew word for shepherd, rohe, comes from this word - the one who sees.  What do shepherds do all day?  They watch.

And she named the well Be'er Lahai Roi, literally Well of the One Who Lives and Sees Me.  Hagar met the LORD, and Hagar had faith! 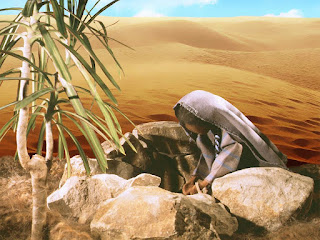 So Hagar heeded the command of the LORD and returned to Sarai.  And Abram heeded the word of Hagar, because he named his son Ishmael, just as the LORD had instructed Hagar.

And Abram was 86 years old.

The bible does not tell us how life was for Abram, Sarai, Hagar, and Ishmael for the next 13 years.  I imagine that Ishmael thoroughly enjoyed his position as Abram's only son. While it lasted.  Stay tuned for the unfolding drama!

Posted by Gratefully Grafted In at 8:14 PM