Picking up in Genesis 12:4, we see that Abraham finally departed from his father's house in Haran, at age 75.  It was time for his social security checks to be forwarded to the land of Canaan.  So he took his wife, his nephew, and everything he owned and loaded up his camels.  (At this point, Abram still had another century to live!)

Abram made his way to the city of Shechem, and went up a hill called Elon Moreh, as far as the terebinth tree. And the scripture tells us, there were Canaanites in the land.

I have driven up this hill, with three screaming women in my car.  I am trying to imagine 75-year-old Abram making that climb!  It is worth it though.  It is still one of my favorite places in all of Israel, and there is still a terebinth tree at the top.  Is it THE terebinth tree?  I don't know, but I climbed it anyway. 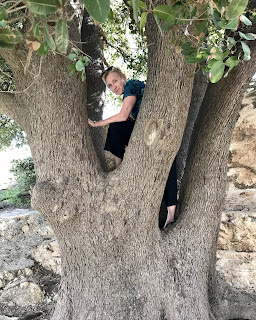 The view from Elon Moreh is astounding.  It is on Mount Kabir and overlooks the Valley of Tirzah, through which Joshua would some day lead the Israelites coming up from the Jordan River.  The mounts of blessing and cursing (Gerazim and Ebal; see Deuteronomy 11:29) are fully in view.  It is easy to picture Abram looking in every direction, seeing the beautiful mountains and valleys that the LORD was giving to his descendants.

Is God trying to start a conflict or something?

The modern name is Nablus, and it is located deep inside the contested areas of the Holy Land.  It is interesting to note that in Arabic, Nabulus means new city.  Shechem, on the other hand, means the back; specifically the neck between the shoulders, or figuratively, as the place of burdens; a spur of a hill.

It is sad to say that Shechem is generally off limits to Jews today.  It is the location of Joseph's tomb, and also Jacob's well, both of which I have visited.   Joseph's tomb had just been vandalized right before I got there.  The Jews are allowed, once per month, to visit the tomb of Joseph.  The visit always takes place at night, with IDF soldiers accompanying them for protection.

Abram continued on a southward journey through the land, building yet another altar as he went.

Then we come to verse 10:
Now there was a famine in the land.

In the south (Negev in Hebrew), there is no water, nothing green, only death. Gotta go!  Abram had to leave the promised land and go to Egypt.

At this point, we get to learn a little bit about Sarai. She was cute. Sixty five years old and still a looker. Abraham thought, hmm, they’re going to like her… I better say "She’s my sister."  He actually begged Sarai to go along with it.

So, this great man of faith was afraid of the king of Egypt. Sarah was that good looking. Apparently, she was to die for... so he lied.

Technically, she was his half sister, as scripture later tells us.  So it was a half-truth.  Was Abram the first politician?  Telling a lie based on a partial truth, for self-preservation?


All the princes of Egypt concurred that Abraham's sister was a hottie, so they brought her to Pharaoh's harem.

Yikes.  It was time for Godly intervention, because Sarai getting pregnant by the ruler of Egypt would have messed up the line of the promised Redeemer.  So Pharaoh's household was stricken with a terrible plague.

God was preserving and protecting Sarai - and the line of the Messiah - through this plague. The Jewish rabbis say that the plague was some kind of painful STD.

In verse 18, we see that Pharaoh was angry and he sent Abram and Sarai away, along with all of their treasures that they accumulated in Egypt.


We see here a foreshadowing of future exodus, when Israel departed the land amidst great plagues and with great treasures.  Also, scripture will show us yet another exodus, when Yeshua returned from Egypt with His parents.


Hosea 11:1 says,
“When Israel was a child, I loved him, And out of Egypt I called My son.
This is quoted in Matthew 2 when Yeshua made His own exodus.

It's almost like the LORD wants us to pay attention to these departures from Egypt!  Egypt is used sometimes as a metaphor for sin in the scriptures.  So chew on that for awhile!  Deliverance from sin?  Both Abraham and Moses departed Egypt with great treasure.  Yeshua departed Egypt, being the great treasure Himself!

Let's look at another prophetic picture that we can see in the lives of Abram and Sarai.  (Sorry, I keep using those names because we haven't gotten to the name change yet.)


In the context of husbands and wives, Ephesians 5 tells us this:
Husbands, love your wives, just as Messiah also loved the church and gave Himself for her, that He might sanctify and cleanse her with the washing of water by the word, that He might present her to Himself a glorious church, not having spot or wrinkle or any such thing, but that she should be holy and without blemish.

I could say so much more right now about this prophetic picture, but I would be getting ahead of myself.  So stay tuned for more crazy adventures now that Abram and Sarai have returned to the Promised Land.

Click here to read about the breakup between Abram and Lot.
Posted by Gratefully Grafted In at 9:53 AM