In Genesis chapter 15, we are going to see the continued unfolding of the Abrahamic Covenant, since Abram is now in the land.

Right off the bat, the LORD gave Abram a vision, and said to him:
“Do not be afraid, Abram. I am your shield, your exceedingly great reward.”

The Hebrew word for shield is magen.

I want to pause for a moment and speak of the Israeli flag.  There are many who believe that the emblem on the Israeli flag represents the star of various pagan deities that appear in Amos 5:25-26 and repeated in Acts 7:43, and that this particular six-pointed star is used in witchcraft.  This view is ridiculous and also anti-Semitic.  It is another way that anti-Zionists try and discredit the modern State of Israel.  I have heard the accusation numerous times, and I have even heard it from lovers of Israel! 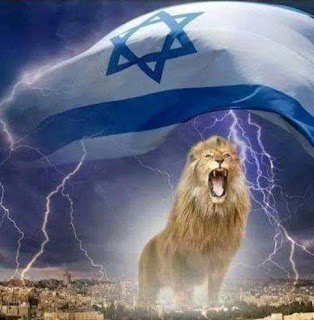 First of all, the emblem on the Israeli flag is known as the Magen David, which actually means David's Shield and not star of David.  It is actually incorrect to refer to the symbol as the star of David.

Secondly, the six-pointed emblem is actually a representation of the name of David, which in Hebrew is spelled dalet vav dalet.   In ancient Hebrew, the letter dalet was represented by a triangle.  The vav carries the meaning of something that connects; we would call it a conjunction in English. 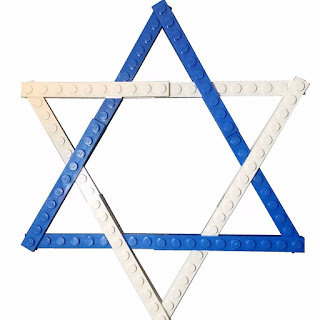 If you are one of those people who are going to freak out about the six-pointed "star" on the Israeli flag, then I hope you are at least consistent and have extreme misgivings about the 50 five-pointed stars on the United States flag as well.

And anyway, aren't stars technically round?

Anyway, in verse 1, The LORD assured Abram that He was his shield, which carries the meaning of protector.  And the LORD is also the protector, or shield, of Israel.  David's shield on Israel's flag is a perfect fit.

Right away, Abram questioned the LORD because in his old age, he was childless and his heir was his servant Eliezer.  (This was a very common custom in the Middle East, in the event that a man had no heir).

And even though he was questioning God in verse 2, Abram addressed the creator as Adonai Yehovah, and this is the first of many places that this name is used of the LORD.  He is saying "O Master YHVH," a term that demonstrates Abram's absolute faith that YHVH is in charge.  This compound name of God, Adonai YHVH, shows up again and again in the scriptures, always in the context of the everlasting covenant.  It cannot be seen in our English translations, which typically use Lord GOD or sovereign LORD.

In fact, when King David was given his own covenant in 2 Samuel 7, Adonai Yehovah was used 7 times in David's prayer.  The context is the forever throne, which links the messianic Davidic Covenant to the everlasting Abrahamic Covenant.

The LORD then brought Abram outside and had him try and number the stars (which of course Abram could not) and promised him numerous descendants, just like those beautiful stars.

Abraham said, "I got zero." God said, "You’re going to have millions." Can you say contrast?

And verse 6 tells us one of the very things that Father Abraham is known for: his great faith!
And he believed in the LORD, and He accounted it to him for righteousness.

The Hebrew word for righteousness is tzadik.  Remember Melchi-Tzadik from the previous chapter, the King of Righteousness?  Tzadik is also the Hebrew word for saint.  Abram became a saint through his belief in the LORD, just like we do when we put our faith in the Messiah our LORD.

In verse 6, we have the first mention of that word believe.  The Hebrew word is aman, from which we get the words for faith (emunah), truth (emet), and amen (amen!).


The words are all intertwined.  In Revelation 3:14 we read,
‘These things says the Amen, the Faithful and True Witness