In verse 7, the plan of God continues to unfold.  The LORD reminded Abram of His promise to give him the land - another reminder of how intertwined the land is to this covenant.

The LORD's directions that follow seem very odd to our modern ears: Get some animals and cut them in half.  But don't cut the birds in half.

Weird to us, but a very common practice in the ancient Middle East.  When two parties made an agreement, they would slice animals in half as a picture of what would happen to either party if they broke the agreement.  In other words, the agreement was binding.

There is a hint of this practice in a wedding ceremony today, although not quite so bloody.  The bride is a picture of the marriage covenant when she walks down the aisle, in between the bride's people and the groom's people.  Did you ever wonder why you were asked, "Bride's side or groom's side?"

The devil does not like the plan of God, as we see in verse 11.  Vultures came down after the carcasses of the animals, but Abram shooed them away. 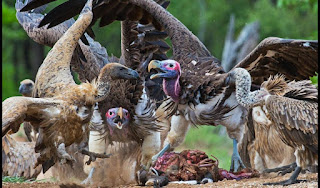 I believe those vultures represent those throughout history and today who would come against the Abrahamic Covenant:
Are you a shoo-er?  Abram was.  We want to have faith like Abram.  Would God‘s covenant with Abraham stand up if there was no one to defend it? Yes. God is God, and unconditional means unconditional. But we are called to take part. We are called to be biblical scarecrows. We are invited to participate!

So anyway, Abram fully expected to walk through the cut animals.  Three-year-old animals were the prime age, the most expensive ones, for sacrifices.

But God put Abraham into a deep sleep.  A dreadful, horrible sleep, the scriptures say in verse 12.

Why the dark, dreadful sleep? Abraham is told in his dreams that his descendants will become slaves, driven out of their land, and they will be afflicted.  Did Abraham see his descendants being persecuted?

Truly Abraham had a nightmare during his deep sleep, but the nightmare changed in verse 14 to a positive note. They would depart from that nation of affliction with great wealth, and they would possess the land after the sin of the Amorites (a reference to the Canaanite peoples) was complete.

People might think it was unfair of the LORD God to displace the people that were in the Promised Land before the Israelites, but scripture tells us that their wickedness had reached a point where the LORD could no longer tolerate it.

Abram was then promised a long life and peace to the end in verse 15.

In verse 17, the LORD Himself passed through the animal carcasses and consumed them.  This is a one-sided action; Abram did not have to do anything.  The covenant was permanent and unconditional. 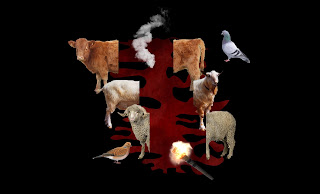 Gods divine presence showed up in smoking fire. There’s a picture here of the pillar of fire and smoke that will eventually deliver Abraham's descendants from Egypt in the Exodus.

When God went through the animals, the first thing he mentioned was the land, in verse 18:
To your descendants I have given this land, from the river of Egypt to the great river, the River Euphrates—  the Kenites, the Kenezzites, the Kadmonites,  the Hittites, the Perizzites, the Rephaim, the Amorites, the Canaanites, the Girgashites, and the Jebusites.”

It is interesting to note that the land promised here to Abraham's descendants reaches far beyond what it is today.  From the Nile to the Euphrates.  But someday, in the coming kingdom, it will happen. 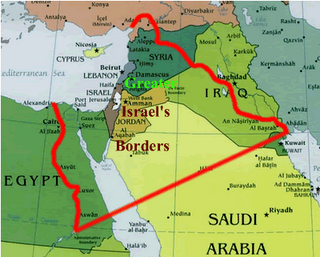 Just a quick note on Replacement Theology - the disturbingly prevalent doctrine in the church today that says God is done with Israel and all His promises are transferred to the church.  The land promise destroys the doctrine of Replacement Theology.  When did the LORD ever give land or national boundaries to the New Testament church?

But the prophecies say that God will bring them back to the land and that they will not be driven out again.  In fact, there are 64 places in the scriptures that foretell the return of Israel to the land.  If you would like to study these scriptures for yourself, a friend of mine in Israel has listed them on her ministry website.  Click here to read them.

To the New Testament believers, Romans 11 warns us not to be arrogant or ignorant.  Unfortunately, Replacement Theology does both.

For I do not desire, brethren, that you should be ignorant of this mystery, lest you should be wise in your own opinion, that blindness in part has happened to Israel until the fullness of the Gentiles has come in.  And so all Israel will be saved, as it is written:
“The Deliverer will come out of Zion,
And He will turn away ungodliness from Jacob;
For this is My covenant with them,
When I take away their sins.”
Romans 11:25-27

The Abrahamic Covenant is still unfolding in our walk through Genesis, but we now come to a chapter that seems out of place but is absolutely strategic.  Click here to continue.

Posted by Gratefully Grafted In at 9:39 AM