Chapter 14 opens up with the first biblical war. Genesis, the book of beginnings, is filled with firsts. And sadly, one of them is war.


There were five kings on one side, lining up for battle with four kings on the other.

For twelve years, verse 4 tells us, they served Chedorlaomer king of Elam, who appears to have been the head honcho of all these kings.  In the thirteenth year, the other kings rebelled.

Then in the fourteenth year, war broke loose amongst all these kings.  The war took place around the Valley of Siddim - that is, the Salt Sea.

The four kings, led by Chedorlaomer, actually defeated the five, who had been led by the kings of Sodom and Gomorrah - kind of like scoring a short-handed goal in hockey.  And guess who got captured in the spoils of war?

Abram took action.  This was family, after all.

In verse 13, Abram was first called a Hebrew.  The word Hebrew, referring to Abram's ancestor Eber, means the region beyond, or to cross over.  And indeed, Abram crossed over when he departed Ur, Haran, and Egypt, crossing over to the promised land.  The word will continue to have significance all the way through the scriptures.  We ourselves cross over when we turn to Yeshua in faith.

So Abram gathered 318 men against Chedorlaomer and his minions, and then he and his tiny army drove these kings clear to Damascus.  They rescued Lot, and brought back a bunch of spoils as well.  The grateful king of Sodom went out to meet Abram in a place called King's Valley.

How was this huge victory possible?

It was supernatural.  This first war is a prophetic picture of the last war, in which Messiah comes and conquers all.  It is also a picture of the spiritual warfare that we wage every day on behalf of the Lord.  Humanly speaking, we often feel vastly outnumbered.  But we have a King who fights with us and for us.

What happened next is mind blowing.  Let's look at verses 18-20:

Then Melchizedek king of Salem brought out bread and wine; he was the priest of God Most High. And he blessed him and said:
“Blessed be Abram of God Most High,
Possessor of heaven and earth;
And blessed be God Most High,
Who has delivered your enemies into your hand.”
And he gave him a tithe of all.


What is going on here?  This priest, Melchi-Tzadik (which means King of Righteousness), king of Salem (actually shalem, or peace) showed up out of NOWHERE after Abram's battle, and then whipped out the bread and wine.

These three verses explode the theology of the universe.

First, what or where is Shalem?  In Hebrew, the city of Jerusalem is actually yerushalayim, or city of peace.  It is technically a plural word, since there is a physical Jerusalem here on earth and also a new Jerusalem that will someday come down from the heavens.  Melchi-Tzadik represents this place.

In this “Tale of Two Cities” that I spoke of several posts ago when writing about Babel (Babylon), here is the first veiled mention of God’s holy city, Jerusalem.

This righteous Priest and King of El Elyon (God Most High, another first mention), then blessed Abram, and Abram turned around and gave this King a tenth of the war booty.

In these three verses, we have the first mentions of a priest, of God Most High (three times in fact), Jerusalem, bread and wine, a prophetic word, and the first mention of tithing. (Even though Abraham technically didn’t give away anything of his own, just spoils from the king of Sodom, who happened to be standing right there).

Notice that Melchi-Tzadik served Abram.  Not only was he a priest, a king, and a prophet; he was a servant.

Just in case you haven't identified this king, let's look to scripture for clarification.

The Messianic psalm 110 tells us,
“You are a priest forever
According to the order of Melchizedek.”

This verse from Psalm 110 is quoted in Hebrews 5:6, clearly linking Yeshua to Melchi-Tzadik.

Hebrews continues the clarification for us in Hebrews 6:19...
This hope we have as an anchor of the soul, both sure and steadfast, and which enters the Presence behind the veil, where the forerunner has entered for us, even Jesus, having become High Priest forever according to the order of Melchizedek.

And in Hebrews 7:
For this Melchizedek, king of Salem, priest of the Most High God, who met Abraham returning from the slaughter of the kings and blessed him,  to whom also Abraham gave a tenth part of all, first being translated “king of righteousness,” and then also king of Salem, meaning “king of peace,” without father, without mother, without genealogy, having neither beginning of days nor end of life, but made like the Son of God, remains a priest continually.

Now consider how great this man was, to whom even the patriarch Abraham gave a tenth of the spoils. And indeed those who are of the sons of Levi, who receive the priesthood, have a commandment to receive tithes from the people according to the law, that is, from their brethren, though they have come from the loins of Abraham;  but he whose genealogy is not derived from them received tithes from Abraham and blessed him who had the promises. Now beyond all contradiction the lesser is blessed by the better. Here mortal men receive tithes, but there he receives them, of whom it is witnessed that he lives.  Even Levi, who receives tithes, paid tithes through Abraham, so to speak, for he was still in the loins of his father when Melchizedek met him.

What we have here in Genesis 14 is a theophany... a pre-incarnate visit to earth by the King of kings, Yeshua the Messiah.  Our King of kings is not only our Passover Lamb, but He is our great High Priest, appearing right here in Genesis!  And Abraham worshiped Him and even shared communion with him! 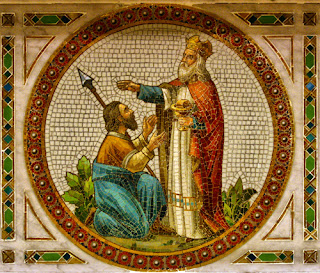 I love how Levi is described as still being bound up in the loins of his father Abraham, meaning that Yeshua is not from the natural priestly line of Levi.  He is our supernatural High Priest.

How interesting that in the near future, right after a war, there will be a king in Jerusalem.  This same Prophet, Priest, and King of Righteousness and Peace, will reign the globe for 1000 years!

Genesis 14 wraps up with Abram telling the king of Sodom that he doesn’t want his stuff, except that which was eaten by his chiefs who went with him.  So after giving one tenth of the spoils to Melchi-Tzadik, Abram apparently gave everything back to the king of Sodom anyway, minus expenses, not wanting it to be known that the king of Sodom made him rich.