I just noticed that it took me seven posts to get through chapter one.  The number seven represents completion. And chapter one saw the completion of the world.  Coincidence?  I think not.

I love that even God Himself rested and set apart a special day for it.  This whole week of creation sets the pattern for all of human history - six thousand years of toil and striving, and then a beautiful millennium of rest, dwelling with our Creator!  This seventh day of rest was so important that it eventually became the sign of the Sinai Covenant between God and Israel - the Sabbath. 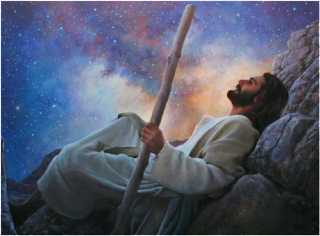 The chapter then goes on to elaborate on many details that were not in chapter one.  For instance, we are told that there was no rain on earth, but that it got watered by a mist that arose from the ground.  More on that when we hit the flood in chapter 7.  There are also details on the four rivers in the Garden of Eden, which have led scholars to conclude that Eden was in Iraq.  But I believe that the land was different before the flood, and so I will stick with a Jerusalem-based Eden (keep reading for more on that).

Then verse 7 says,
And the Lord God formed man of the dust of the ground, and breathed into his nostrils the breath of life; and man became a living being (chai nephesh - a living soul, the same term used for the animals).

Note that man was not given a chai nephesh, but became one.  Man is a complete being, made of three parts (just like God!) - body, mind, and spirit.  And just like God, we are not three separate persons, but one person with different facets.

But wait!  In this verse, we also see a word that is used in God's creation of man, but not of animals - neshama.  God breathed into man's nostrils the neshama of life - the very breath of God.  This action sets man apart from the animals.

Chapter two goes on to describe the garden of paradise that God planted in Eden.  The word Eden means pleasure.   It was the LORD's pleasure to create the earth for man.  The word that is translated eastward - kedem - can also mean ancient, or from the earliest time.  I do not believe that this garden was somewhere over in Iraq or other parts east, but in Jerusalem.  I once wrote about the symbolism of East (curses) and West (blessings), and if you want a bunny trail today, here it is.

Additionally, Ezekiel 28 - a prophecy regarding the fall of Lucifer - tells us that the devil was once God's anointed cherub, dwelling in Eden, on the holy mountain of God.  God's holy mountain was and is in Jerusalem - Mount Moriah, aka the Temple Mount.  The land of Eden is the land which would one day be promised to Abraham, and the garden that was planted in Eden would have rested on God's holy mountain.

Reading further, we see that the LORD God put two trees into this beautiful garden - the tree of life and the tree of the knowledge of good and evil.  It is interesting to note that it was only the second tree that was forbidden them, carrying the punishment of death if they did.  They were free to eat of every other lovely tree in the place.  Ah, a test for mankind.  Will they pass the test?  I think you know.  Sigh. 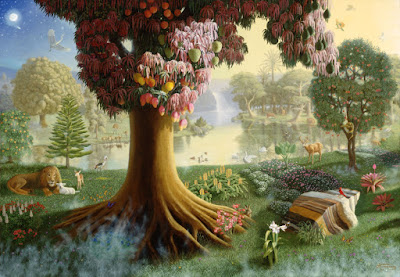 Chapter two wraps up with details on the creation of Adam's soulmate.  Did God save the best for last?  Ha ha.  It is interesting to note that Adam was formed from the dust of the earth, and then Eve was formed from part of Adam - the only two human beings on earth who did not have a mother.

They were also the only two humans ever who did not have belly buttons.

Verse 24 is a key biblical verse, especially in today's society:

Therefore a man shall leave his father and mother and be joined to his wife, and they shall become one flesh.

The joining of man and woman together in marriage has been God's perfect plan from the very beginning.  Yeshua repeats this verse, which is recorded in Matthew 19:5 and Mark 10:7.  And Paul reaffirms this great truth in Ephesians 5:31, and he goes on to compare earthly marriage to our heavenly marriage to the Messiah.

The Bible begins and ends with marriage.  No wonder the devil is hard at work to mess it up.  The devil hates what God loves.

Stay tuned!  You can click here to continue.
Posted by Gratefully Grafted In at 7:24 AM