My last post touched on day seven, but today I want to look at the seventh day in more detail.

Ahhh, the Sabbath.  Scripture tells us that on the seventh day, God rested from His work.

It is interesting to note that day seven does not end with the mention of erev and boker, evening and morning.

God's creative work was done.  He had brought order out of chaos (secondary meanings to erev and boker).

Since Genesis is the home of all biblical truth in seed form, what is the meaning of this special seventh day that God blessed and sanctified?  (Sanctified means set apart, or made holy).

The concept of the Sabbath is developed throughout the rest of the scriptures.  It not only points to a concept, it points to a Person.

In Exodus 20, the Israelites were given the ten commandments, which included a command to refrain from work on the seventh day.  But even before God gave the command to Moses on Sinai, He was already setting it up in Exodus 16 with the provision of manna for them in the wilderness, enough for each day. 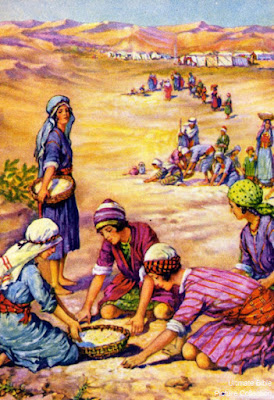 Some people did not put their trust in God and tried to gather extra manna during the week.  The following day, they found it to be wormy.  But then on day six, the LORD told them to gather extra, to have enough for day seven.  Some people, remembering the worms, did not do it, and because of their disobedience, had nothing to eat on the Sabbath.

What is this about?  It was about trust.  Would His people trust and obey Him in the procuring of their bread?  It all points to Yeshua, our Bread of Life, in Whom we are to trust... even when the instructions do not make sense.

The Sabbath became the pinnacle of the Sinai Covenant.  Exodus 31:16 says,
Therefore the children of Israel shall keep the Sabbath, to observe the Sabbath throughout their generations as a perpetual covenant.  Ezekiel 20:20 confirms that the Sabbath would be a sign between the LORD and His people.

It has been said that throughout history, it wasn't so much that the Jews kept the Sabbath, but that the Sabbath kept the Jews.  It is one of the main things that has set them apart as a people since their sojourn in the wilderness.


When you visit Israel today, you can see just how important the Sabbath is to the Jewish culture.  Nearly everything shuts down in the land, starting late Friday afternoons.  Public transportation ceases, including the national airline, El Al, which does not fly on the Sabbath.

There have been many rules and regulations that have been attached to the Sabbath outside of what is written in the scriptures.  For example, every hotel in Israel has a Shabbat elevator.   So that a person can avoid having to press a button and "light a fire," the elevator simply stops at every floor.

Yeshua got in trouble with the legalistic rulers of His time, being accused of breaking the Sabbath by picking grain in a field and by healing people.  But Matthew 12 explains that Yeshua is the LORD of the Sabbath.  In Mark 2, He told those rulers that the Sabbath was made for man, no the other way around.  The leaders had made the Sabbath into a burden, missing its point completely.

This brings us to the ultimate point of the Sabbath.

In Matthew 11, Yeshua declares,
Come to Me, all you who labor and are heavy laden, and I will give you rest. Take My yoke upon you and learn from Me, for I am gentle and lowly in heart, and you will find rest for your souls.  For My yoke is easy and My burden is light.”

For we who have believed do enter that rest, as He has said:
“So I swore in My wrath,
‘They shall not enter My rest,’
(From Psalm 95, speaking of those who went astray from the LORD and did not trust in Him)
although the works were finished from the foundation of the world.  For He has spoken in a certain place of the seventh day in this way: “And God rested on the seventh day from all His works”; and again in this place: “They shall not enter My rest.”

Yeshua, the Lord of the Sabbath, our Bread of Life, our Coming King, has BECOME the Sabbath.  It is in Him that we find our rest, both now and forevermore.  The very word sabbath is based on the Hebrew number seven, or sheva, which means completion.  We can rest in His finished work. 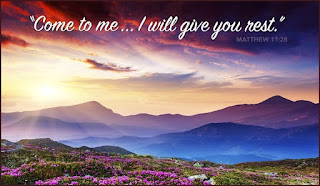 Posted by Gratefully Grafted In at 8:31 AM