In today's post, I want to back up one more time to chapters 1 and 2, for a big picture moment before moving on.

Six times in chapter 1, God uses the word good by itself, or tov in Hebrew.  Then, in the last verse of chapter one, the word tov is used a seventh time, only this time, the word is paired with me'od, or very good.

Creation was not called tov me'od until it was completed.  And what completed the creation?  The formation of woman from man.  In chapter 2, Adam had been given the job of naming the animals on day six, and God brought to our attention that Adam was alone.  He then said, It is lo tov (not good) for man to be alone.  When woman was created, lo tov became tov me'od.  Not good became very good.

The LORD put Adam under anesthesia and took flesh out of Adam's side, thus creating Chava (Eve), which means life or living. And we know that she became the mother of all living.

Verse 24 says: Therefore a man shall leave his father and mother and be joined to his wife, and they shall become one flesh.  Something supernatural happens when two become one.

God gives us an amazing truth with the creation of woman from and for man.  Love.  It is the reason He created us, His bride, for Himself.  All of human history hinges on this.  He is coming back to restore all things and to claim His bride!  Remember, the Bible begins and ends with marriage.


So how long did tov me'od remain tov me'od?  We don't know exactly, how long Adam and Chava blissfully lived in the garden before they disobeyed God, but it doesn't seem like it was very long.  (We do know that he lived 930 years, and that he fathered Seth at age 130, and that Seth was born after Cain killed Abel.)

Adam was told in chapter 2 that he was not allowed to eat of the tree of the knowledge of good and evil.  Adam had only one rule.  Easy, right?  God was giving Adam a test to see if Adam, out of love, would obey Him.  Verse 17 says,

but of the tree of the knowledge of good and evil you shall not eat, for in the day that you eat of it you shall surely die.

The Hebrew actually reads, dying you will die.  There will be instant death and gradual death.  Hold that thought; I'll come back to it.


The command was given to Adam before the woman was created.  But Adam must have told Eve about the command, because she repeated it to the serpent in chapter 3, and even adding that they may not even touch it.

Did God tell them not to touch it?  The narrative does not say that He did or did not.  Commentaries differ in their conclusions.  My opinion is that God must have said it at some point during His fellowship with Adam, otherwise Eve committed sin by adding to the Word of God.

Anyway, chapter 3.  This is the chapter that the rest of the Bible seeks to repair.  In Hebrew, it is tikkun olam - the healing of the world.  Today all of creation groans toward this very end (see Romans 8:22).

The chapter starts with the serpent, the nachash.  It was the craftiest, the most cunning of all the animals, which is why the devil probably chose it to do his nasty business.

Somehow, the devil took on the form of that serpent and deceived Chava.  (Where did that devil come from,anyway?  Hold that thought, and let's come back to that...)

With those words, he inflicted doubt upon the mind of Chava.  The Father of Lies began his career right here.  He wasn't blatant about what he said to Chava, but sneaky.  If he had come out with an outright lie right away, she probably would not have bitten.  He continues with his crafty ways today, which is why we must be DILIGENT!

Chava went on to assure the snake that God really did say that, and then she added the comment about not even touching it.

In verse 4, the devil/serpent replied with a lie that is still being believed today:

Then the serpent said to the woman, “You will not surely die.

I must stop here and address this verse.  Most of Christendom teaches the immortality of man's soul; that we are eternal beings.  This Greco-Roman thinking infiltrated the church around the fourth century.  I've written about these things before.  You can click on the tab that says "Judgment" on the right if you want more bunny trails on that subject.

The truth is, only God can be eternal, with no beginning and no end.  Man definitely had a start point.  I believe that Adam was created as an immortal being, meaning he was not subject to death or decay when he was created, but that it was his sin, his failing the test of obedience, that rendered him into a mortal.  Adam was created as a complete being:  mind, body, and spirit.  His sin subjected ALL parts of him to death.


And we were all born with that sin nature, that mortality of Adam on us, for it is only faith in Yeshua that offers us immortality.  And I believe that this immortality will be given to us at the resurrection, as written in 1 Corinthians 15.  Here are some excerpts from that chapter, but I encourage you to go and read the entire thing.

For since by man came death, by man also came the resurrection of the dead. For as in Adam all die, even so in Christ all shall be made alive.

Now this I say, brethren, that flesh and blood cannot inherit the kingdom of God; nor does corruption inherit incorruption. Behold, I tell you a mystery: We shall not all sleep, but we shall all be changed— in a moment, in the twinkling of an eye, at the last trumpet.

The devil continued with Chava and appealed to her pride, telling her she would be like God.  She ate, and then Adam ate. 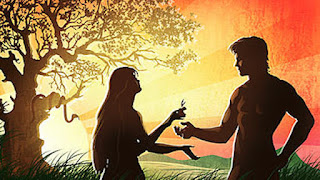 In an instant, they experienced spiritual death.  They were severed from that spiritual connection to their Creator, and they knew it.  This is how death came instantly - the spirit of man died.  The process of bodily death began at that moment, too, as well as the depravity of the mind.

At the instant of their spiritual death, they perceived their nakedness, and were ashamed.  They threw together outfits of leaves. We will come back to this subject in my next post.

The LORD showed up immediately in verse 8 - most versions say something like in the cool of the day.  But that word for cool is ruach, the same word for spirit.  It can mean breeze, wind, and spirit.  And the couple hid themselves from His Spirit, for His spirit in them had died.

Then the LORD questioned them, asking them how they knew they were naked, and if they had eaten from the forbidden tree.  Of course, the question is rhetorical.  He already knew the answer.  But because He still desired a relationship with them, He engaged them in dialogue about it.

Did you notice... God still called out to them in their fallen state.  He still calls out to us today.   God is always the one that breaks the silence because man, being spiritually dead, is unable.  Hallelujah for that great love!

Adam:  This WOMAN that YOU gave me...

Chava:  That SERPENT made me do it...

(Anyone with more than one child knows that this particular fallen trait of Adam and Chava is alive and well today.)

It is interesting that the serpent is suddenly silent.

The LORD then starts at the bottom in meting out punishment.

Following the instant spiritual death which Adam and Eve experienced, we see that all of mankind will then experience physical death, but it is a process.  When sin entered the world (which God had  declared tov me'od), entropy (decay, order to chaos) began in that instant.  All that was previously declared good was suddenly not so good.  Adam and Eve and all their offspring would eventually die physical deaths, too.  Dying they would die.

So where did this evil tempter come from?  We know he showed up in the garden in the form of the snake. But what was his origin?

Let's look at what we know.  Job 38 tells us that the sons of God (the elohim:  those created beings in the heavenly realm) shouted for joy when God laid the foundations of the earth.  So we know that God created the spiritual realm of elohim before He created the physical world.


Later, Yeshua tells us in Luke 10 that He saw the devil fall like lightening from heaven.  What caused that fall?

Ezekiel 28 begins with a proclamation against the king of Tyre, but then morphs into a proclamation against the devil himself.  We are told he was beautiful, covered in splendid jewels, full of wisdom, and the embodiment of perfection, until iniquity was found in him.  We are told that he was in Eden, the garden of God.  There is evidence that he was a lead worshiper.  But then he became prideful, sinned, and became filled with violence, and therefore God cast him out of His mountain.  (God's mountain is Mount Moriah in Jerusalem, which is why I surmise that the Garden of Eden was there as well).

He then showed back up a bit later in Eden, disguised as a snake and ready to cause major trouble.

We can draw a couple conclusions here.  First, we can see that the members of the heavenly host were given a measure of free will.  This hasn't been something I've often thought about.

Second, the devil rebelled at some point between the creation of the world and the fall of man.  Aha... the true gap theory!  Scripture does not tell us how much time passed between the devil's rebellion and when he deceived Eve.  (I don't believe it was too long of a gap... Adam was formed on the sixth day, and he was 130 years old when his son Seth was born to replace Abel, which was well past getting kicked out of the garden.)

So what made the devil prideful and angry?  Was he angry that God created beings that had something that he didn't?  The very image of God upon them?  Was he annoyed that dominion of the earth was given to man and not him?  We can only guess, but my opinion is that the devil became jealous of God's treasured creation - man.  He rebelled and took about a third of the elohim with him.

We know that the heavenly host was vast in number, according to Hebrews 12:22.  And one-third of a vast number is still probably a vast number.  But praise God that the devil and his minions are outnumbered by God's faithful messengers!  Keep this in mind as you engage in spiritual warfare.

Ok, moving on.  There was a drastic change when sin entered the world.  My next post is going to address how the first two people went from naked and unshamed to naked and ashamed. 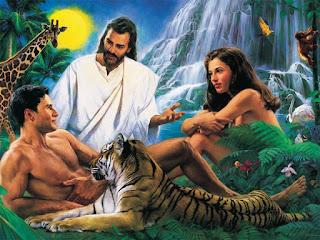 Stay tuned if you dare.  And click here to move on.

Posted by Gratefully Grafted In at 10:02 AM