The earth has now been filled with vegetation, and has been made ready for life that breathes.  Enter day five.

Day five did not see the creation of all the animals; only the fish and the birds.  Why is that?

God is giving us a picture here.  Take a moment to look at the pattern of the tabernacle, the fifth piece of  God's furniture is the altar of incense.  That altar is a picture of the prayers of the saints ascending before the LORD - from earth to heaven.  The fish are a picture of earth-bound creatures, and the birds represent heavenly creatures.  (The Hebrew word for heavens is shamayim, and means skies.) 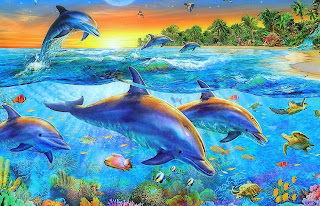 God's creation is so magnificent. It is no wonder that early people began worshiping the creation, because of that fact. But God's creation is a memorial to HIM, our Creator. Romans 1 speaks of this:


For since the creation of the world His invisible attributes are clearly seen, being understood by the things that are made, even His eternal power and Godhead, so that they are without excuse, because, although they knew God, they did not glorify Him as God, nor were thankful, but became futile in their thoughts, and their foolish hearts were darkened.  Professing to be wise, they became fools, and changed the glory of the incorruptible God into an image made like corruptible man—and birds and four-footed animals and creeping things.

When we look at creation, scripture says we are without excuse.  But because we are corruptible beings, things get messed up.  This is why God had to hand down that first oh-so-important commandment:  Love the LORD your God ONLY, and have no idols.  No other gods.   Our main purpose is to worship Him, which is why I believe He gives us the fish-birds reminder on day five.

So many worship songs sing of how the amazing creation points to our Creator.  Here are a few that come to mind, just off the top of my head (links are included, in case you need an interlude of worship about now)


Day five is the first place that the LORD uses the term that is translated living creature.  In the Hebrew, it says chai nephesh, which means living soul.  If you have ever wondered if animals have souls, the answer is no.  Animals do not have souls, they are souls.  The word nephesh simply means  a created being.  This is a good thing to remember as we head into day six.

Now enter day six, which contains God's magnum opus:  Man.  I don't say this in a prideful, man-centered way, but to demonstrate the heart of YHVH.  He created man in His own image - someone with whom He could have fellowship.

God's first order of business for day six was to create the animals:

Just like the fish and birds, the animals were created as living beings (chai nephesh).  If you ever wanted an answer to the philosophical question regarding the chicken or the egg, of course the chicken came first.  The chicken became a living soul.  (But being a bird - albeit a non-flying bird - was the chicken created on day five or day six??) 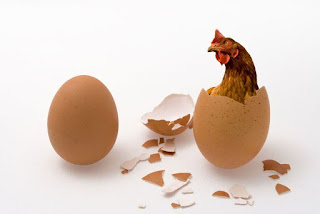 God then wraps up creation with this:

As opposed to the animals, man was given the ability to take charge and have dominion over the plant and animal kingdom.  To do this, we needed intelligence; the ability to think, to reason, to make choices and decisions.  God also gave us the free will to love and worship Him.  Animals, such as dogs, certainly show a degree of loyalty and affection toward their masters, but in a different capacity than man.  But more importantly, God uses a word in regard to man in the next chapter that He does not use with animals... neshama.  I will come back to this in my next post.

I believe that just as God is one person with different contexts (Father, Son, Holy Spirit), so is man created the same way (mind, body, spirit).  Adam was created as a complete being, in His image.

Verse 28 tells us that God blessed Adam and Chava.  He then commanded them to be fruitful and multiply, to subdue the earth, and to have dominion over all living things that move on the earth.  Male and female He created them, so that they could multiply.  (Adam and Steve are unable to multiply).

Chapter one wraps up with this:

Then God saw everything that He had made, and indeed it was very good. So the evening and the morning were the sixth day.

When describing the completion of this sixth day, the Hebrew uses the article the, which none of the other days do.  This signifies completion.  God's work of creation is done!

It is interesting to note that there are similarities between days 1 and 4 (light), days 2 and 5 (division of sky and water), and days 3 and 6 (land, vegetation, and life).  Day seven stands alone.

Genesis 1 has been amazing and awesome, and we finally get to move on.  As we will see in chapter two, the narrative will go back and fill in more details of creation.  This circular pattern is typical of Hebraic thought.

Posted by Gratefully Grafted In at 12:05 PM