Musings on the Crucifixion, Part 2

If you missed part one, you can click here to read it.

Tradition says that Yeshua was crucified at the site of the Church of the Holy Sepulchre, which was "discovered" by Constantine's mother Helen through a series of "visions" in the fourth century. It is a very, ahem, interesting place, and perhaps some day I will write a post on it.  Or not.  Suffice it to say that the location of the site had formerly housed a temple of Venus, and that seven different sects of Christianity spar with each other over the rights to the place.  Ironically, the key is held by a Muslim family.  It is located to the north and the west of Mount Moriah.

Another location that claims the site of the crucifixion is the Garden Tomb, located on the north side of the city, just outside the Damascus Gate. A beautiful and peaceful place, to be sure, and a great place to meditate on what Yeshua did for us. 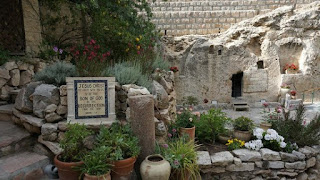 However, there is really no scriptural pattern that would justify a site to the north or the west of the Temple Mount.

For a few years now, I have believed that the crucifixion took place on the Mount of Olives, east of the Temple Mount across the Kidron Valley.  Knowing some of the Jewish roots of our faith is very helpful here.

Every single translation that I can find of Genesis 2:8 says that God planted a garden Eastward, or toward the East.  However, this is incorrect.  The Hebrew word kedem (which means both east and from ancient times) is preceded by the Hebrew letter mem, means from.  God either planted a garden from the earliest times, or from the East (or both).  But not toward the east.


Abraham took his son Isaac to the land of Moriah, as directed by God.  God then showed him exactly the place where the eventually-averted sacrifice of Isaac was to take place.  Methinks God led them to the Mount of Olives, east of the location of the future temple, and probably the exact place were Yeshua was crucified.

When Yeshua took on the curse of sin, this established pattern from God indicates that the crucifixion would be to the east of the Temple Mount, which would put it across the Kidron Valley and on the Mount of Olives.

Deuteronomy 21:22-23 tells us, If a man has committed a sin deserving of death, and he is put to death, and you hang him on a tree, his body shall not remain overnight on the tree, but you shall surely bury him that day, so that you do not defile the land which the Lord your God is giving you as an inheritance; for he who is hanged is accursed of God.

That's not all.  There is biblical evidence that He was nailed to a living tree, and that the two robbers were on the same tree; one on each side of Him.  And it was likely an almond tree, and the Tree of Life in the Garden of Eden was probably an almond tree.  (I know... this flies in the face of every depiction of the crucifixion we have ever seen).  The menorah in the temple was fashioned after an almond tree.  With Yeshua in the middle between the two criminals, all arms raised, they would have resembled a menorah.  The six branches of the menorah represent mankind with the seventh middle branch representing God.  If this is the case, what a stunning picture of Yeshua - Son of Man and Son of God - in the middle, featuring the head of God with human arms raised up. 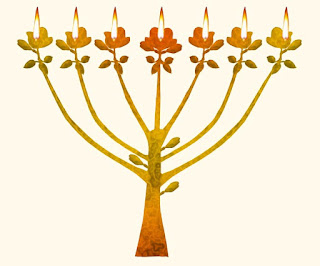 There is yet another picture to consider in this scenario.  In the temple across the Kidron Valley, the Holy of Holies featured two cherubim on the Mercy Seat facing one another, covering the Ark of the Covenant (which housed the Ten Commandments, manna, and an almond rod). 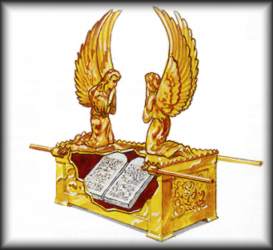 The two criminals on the tree with Yeshua would have depicted just the opposite, facing away from Him.

Even the very items contained in the Ark of the Coven:ant were highly symbolic.  The Almond Rod - a picture of the priesthood for Yeshua, our High Priest.  The manna, for Yeshua, our Bread of Life.  And the Ten Commandments, showing that Yeshua fulfilled every single precept of the Torah perfectly, thereby becoming our Living Torah when we put our faith and trust in Him.

Posted by Gratefully Grafted In at 9:48 AM