It occurred to me that there is another similarity to Yeshua in chapter 40, in regard to the two prisoners.  One is set free, and one is condemned.  I am reminded of the two theives on the cross; one is condemned and the other promised paradise.

Joseph is still languishing in prison, and we are told that it is now two years later. God’s timing is about to manifest itself.

Pharaoh has two bizarre dreams on the same night. They are eerily similar.

In the first dream, Pharoah is standing by the beloved and mighty Nile river, and seven big fat cows come up out of the water.

The fat cows are standing around, minding their own business, and seven skinny, ugly, starving cows come up out of the river and eat them. 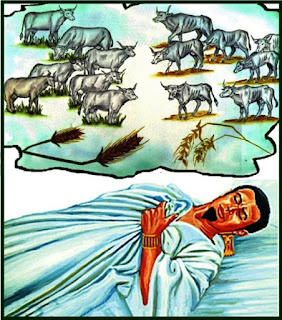 Cows are not carnivores. This is weird.

So Pharaoh awakes. He must’ve shaken his head and then thought wow, crazy dream!

He falls back asleep and has a second dream, very similar to the first. Seven plump grains show up on one stalk. Suddenly, seven scrawny, skinny grains blighted by the East wind, show up on another stalk and devour the seven big ones.  (Remember how the idea of east is a picture cursing, biblically?) 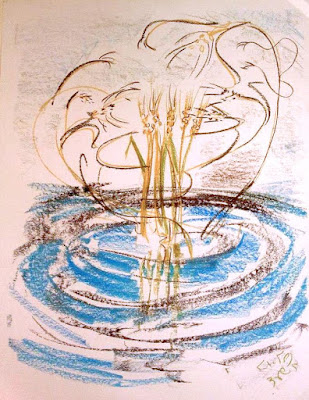 What the heck?? Pharaoh must be really perplexed by this point.

Pharaoh sends for someone, anyone, who could possibly interpret the dreams for him.  None of his sorcerers or magicians has an answer for him.

Finally, the cupbearer sees a chance to make good on his promise to Joseph and gain favor with Pharaoh at the same time. Starting in verse nine, he says:

Then the chief butler spoke to Pharaoh, saying: "I remember my faults this day.
"When Pharaoh was angry with his servants, and put me in custody in the house of the captain of the guard, both me and the chief baker, "we each had a dream in one night, he and I. Each of us dreamed according to the interpretation of his own dream.  "Now there was a young Hebrew man with us there, a servant of the captain of the guard. And we told him, and he interpreted our dreams for us; to each man he interpreted according to his own dream.  "And it came to pass, just as he interpreted for us, so it happened. He restored me to my office, and he hanged him."


Pharaoh is intrigued (or desperate) enough to send for Joseph after hearing his cupbearer's tale.

Joseph is cleaned up and brought before Pharaoh. He tells Pharaoh about his God who can interpret his dream.  What faith! What boldness! Pharaoh himself was considered a god in his culture, so to stand there and elevate your God above Pharaoh and all that he stood for was gutsy.

Pharaoh describes both of his dreams to Joseph.

Joseph instantly gives credit to God, assuring him that God will give him peace about it.  He interprets Pharaoh's dreams, saying they are in fact one dream.  He tells Pharaoh what God is about to do: He will bring seven years of plenty and then seven years of famine.

There is a biblical pattern of twos that has been established in Genesis.  Joseph himself had two dreams.  There were the two dream of the prisoners.  Pharaoh has two dreams.  And in the book of Daniel, Nebuchadnezzar has two separate, prophetic dreams that tell a similar story.

The bible often speaks of two witnesses.  Is that what we are seeing through these double dreams?  The scriptures themselves testify of Yeshua with two witnesses:  the Tanach and the Brit Chadashah.  (Old and New Testaments). And the gospels give us four witnesses... which is even more than the lawful requirement.

Look what Joseph says in verse 32:
And the dream was repeated to Pharaoh twice because the thing is established by God, and God will shortly bring it to pass.

By the word of two or three witnesses, a matter or a word is established.  This is clearly stated in Deuteronomy 19, Matthew 18, 1 Timothy 5, 2 Corinthians 13, and Revelation 11.

Have you been given a prophecy? Do not be afraid to seek confirmation.

Joseph does not stop at the interpretation of the dreams.  He then lays out an entire 14-year game plan for Pharaoh.  Look at Pharaoh's reaction:
So the advice was good in the eyes of Pharaoh and in the eyes of all his servants. And Pharaoh said to his servants, “Can we find such a one as this, a man in whom is the Spirit of God?”

From prison to Prime Minister in one day.  Well, that escalated quickly.

Thirteen years waiting and then one day.  Just like Abraham had to wait a long time to see God's promise be fulfilled, Joseph waits a long time in Egypt for God's plan to move forward.  And when God moves His hand, He seems to move quickly.

Pharaoh seeks a man in whom is the Spirit of God, and he looks no further than the Hebrew man standing in front of him.

An Egyptian god acknowledging the true God?  This is huge.

Joseph is given a signet ring, which we learned from Judah is symbol of authority; something with which you signed your name.  Joseph is then decked out in finery and driven all over Egypt so that every knee could bow down to him.

Joseph is then given a new name: Zaphnath-Paaneah.  There are several meanings to this name that scholars have discerned:  revealer of secrets, God speaks and he lives, and savior of the world.

Verse 46 tells us that Joseph is thirty years old when he begins his service to Pharaoh.  Ironically, thirty is the age at which a cohen, or priest, begins ministering in the tabernacle/temple.

Joseph gets right to work, storing up massive quantities of grain in those first seven years.  It was the custom of the Pharaohs of ancient Egypt to collect 10% of the crops for tax purposes.  Did Joseph collect more than that?  We are not told.

The context of Manasseh's name is Joseph forgetting about all of his trials, but also forgetting about his father's house.  And Ephraim's name is a reminder of the fruitfulness that Joseph is now experiencing in the land of his affliction.

It makes me think of the forgetfulness of God when it comes to our sin, and the fruitfulness of our lives in Messiah. when we are forgiven.  Joseph doesn't forget about his father's house in a bad way; he forgets about any bitterness he may have harbored toward them.

In verse 53, the fruitfulness of the land ends, and thus begins the great famine.

The famine is far-reaching, affecting all the surrounding nations. Joseph opens the storehouses and sells grain. 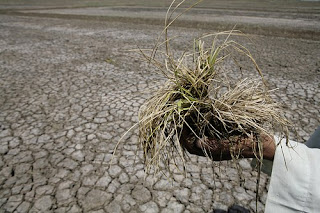 This famine was engineered for one big purpose! To bring Jacob, his 11 sons, and their families to Egypt, so that God, the ultimate history writer, could give us an amazing picture of His plan for mankind!

The Egyptians begin to run low on food, as do all the surrounding countries that are affected by the famine.

Pharaoh points to Joseph as the one to go see.  Soon, people from all around come to see Joseph, the provider of bread.

Click here to see what happens next.
Posted by Gratefully Grafted In at 12:30 PM