So, after chapter 43, everything is going well for the brothers.  They have more food, they have their little brother intact, and they even get a bonus meal with the Prime Minister of Egypt.  After the festive meal with Joseph, the brothers prepare to head home the next morning.

Little do they know that Joseph's testing of them continues.  He commands his steward to fill the brothers' sacks with grain, return their money again, and this time, to place a silver cup into the sack of the youngest.

Silver... again. The substance representing redemption.  Joseph had been sold for twenty pieces of silver; would silver now be the undoing of the brothers?

I wonder if Joseph's steward is perplexed by their boss's interest in this ragtag band of Hebrews.

The brothers start up their donkeys and head out.  They don't get far before Joseph's steward, at Joseph's command, overtakes them and demands a search for his master's cup of divination. 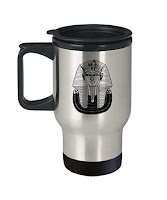 Does Joseph really use a silver cup for divination, which is like reading your horoscope times ten?  I doubt it.  Joseph has shown all along that he trusts in the One True God.  The guy could interpret dreams, for crying out loud.  He had no use for staring at dregs in a silver cup to know the future.  But Joseph is maintaining his Egyptian appearance to his brothers, so the divination cup is right in line with that.

The brothers insist upon their innocence, even going as far as calling for the death of the one with whom it is found, and the rest would become slaves.

This brings to my mind the oath of Jacob to Laban, calling for the death of the one who was found to be in possession of Laban's household gods.

Is this why the scriptures give us such warnings about oaths?  In Matthew 5, Yeshua says, don't make oaths.  Don't swear by heaven, earth, your head, or anything else.  Let your yes be yes and your no be no.  This is actually what the third commandment is about:  do not take the LORD's name in vain.  The Hebrew actually means do not lift up and swear falsely by the name of the LORD.
Rash oaths are not cool.

Fortunately, Joseph's steward is a decent sort of guy, and he says that the one who has the cup will become a slave, the rest would be free to go.

Interestingly, the steward searches the eleven bags in birth order, which we know the odds from the seating arrangement at the table is around a 1 in 40 million chance.  The steward obviously has the birth order of these Hebrew brothers memorized.

Surprise.  The silver cup is discovered in Benjamin's bag.


The brothers have a perfect chance now to get rid of their father's remaining favorite child, the way they had done with Joseph.  Their integrity is being tested.  Are they still the dirty rotten scoundrels that they once were?

The brothers freak out and tear their clothes.  The custom of garment-tearing goes way beyond being upset or annoyed - it is an act of heartbreak and agony.

Do they accuse Benjamin?  Do they call him stupid?  Do they demand an explanation from young Benjamin?  Nope.  Loading up their animals again, all the brothers head back to Joseph's house.  Every single one of them. Thankfully, the brothers do not abandon Benjamin to the "pit."

Once again, the brothers fall before Joseph, who says an interesting thing, continuing his charade as an Eyptian and linking the incident to the stolen cup:
And Joseph said to them, “What deed is this you have done? Did you not know that such a man as I can certainly practice divination?”

Once again, Joseph offers to just keep Benjamin and send the rest home.  He gives them one more chance at self-preservation at the expense of Benjamin. Had they really changed?  Words are cheap; actions reveal the truth.  Would they finally bail on their little brother?

In verse 16, Judah exclaims that God has found out their iniquity; in other words, God knows all, no silver cup needed.  In regard to guilt, Judah is not talking about the theft of the silver cup; he is talking about the guilt that he and his brothers have been bearing for over 20 years.

He blurts out the story to Joseph, although he leaves out the part about selling his brother into slavery. He continues in his role as intercessor, pleading with Joseph to release Benjamin and the others, and keep him as a slave instead.  For how can he bring such sorrow onto the head of his father?  He and his brothers have already broken their father's heart and are living with the consequences.  He is not just pleading for Benjamin.  He is pleading for his father, too.

Judah offers his life in place of his brother.

Judah is  willing to give up his life to provide another little brother with the opportunity to return home to his father. So Judah is someone who steps up, takes responsibility, and demonstrates his willingness to make the sacrifice that would make things right- just as Someone else would do many years later.

And as the chapter ends, we have come to the high point of the entire Joseph story.

Posted by Gratefully Grafted In at 1:25 PM