Joseph, aka that dreamer by his brothers, is about to encounter dreams again.  This time, the dreams are not his own.

Two important men in Egypt have offended Pharaoh.  We don't know what they have done, but it is enough to land them in jail.  Perhaps they served a less-than-stellar meal to the Pharaoh.  Who knows?  They were probably being held in jail, awaiting their trial and sentencing.

Each of these gentlemen has a dream in prison.

Look at verse 8
And they said to him, “We each have had a dream, and there is no interpreter of it.”
So Joseph said to them, “Do not interpretations belong to God? Tell them to me, please.”

Joseph is acknowledging here that he will be able to interpret the dream because he follows the One True God.  No one else around him serves YHVH.

This story reminds me of Daniel.  Both are innocent, both are in exile a foreign land, both are trusted by head honchos, and both interpret dreams.

Here is the cupbearer's dream:
Then the chief butler told his dream to Joseph, and said to him, “Behold, in my dream a vine was before me, and in the vine were three branches; it was as though it budded, its blossoms shot forth, and its clusters brought forth ripe grapes. Then Pharaoh’s cup was in my hand; and I took the grapes and pressed them into Pharaoh’s cup, and placed the cup in Pharaoh’s hand.” 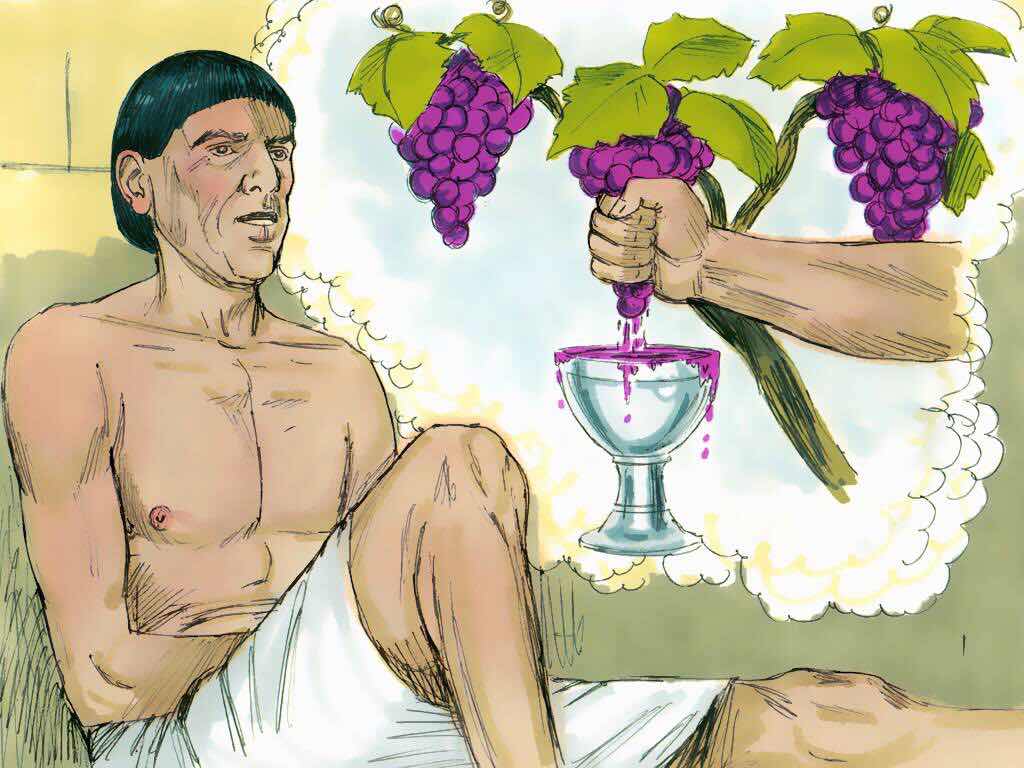 Here is Joseph's answer:
And Joseph said to him, “This is the interpretation of it: The three branches are three days. Now within three days Pharaoh will lift up your head and restore you to your place, and you will put Pharaoh’s cup in his hand according to the former manner, when you were his butler.

The next thing we see is the first time that Joseph pleads for himself:
But remember me when it is well with you, and please show kindness to me; make mention of me to Pharaoh, and get me out of this house. For indeed I was stolen away from the land of the Hebrews; and also I have done nothing here that they should put me into the dungeon.”

The baker sees the good report that Joseph gives to the cupbearer, so he shares his own dream:
“I also was in my dream, and there were three white baskets on my head. In the uppermost basket were all kinds of baked goods for Pharaoh, and the birds ate them out of the basket on my head.” 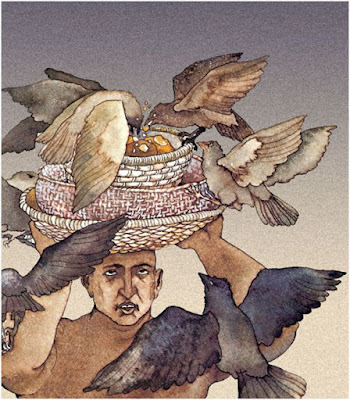 Joseph's reply was:
So Joseph answered and said, “This is the interpretation of it: The three baskets are three days. Within three days Pharaoh will lift off your head from you and hang you on a tree; and the birds will eat your flesh from you.”

Gulp.  I'm guessing that this is not what the baker wanted to hear.  There was a form of capital punishment used at this time in Egypt which involved beheading, and the headless body was left hanging on a tree for birds to peck at until it was devoured.

Did you notice that the term three days shows up in both instances?  This is a theme that shows up frequently in scripture, and someday I will study them all.  For example, Abraham and Isaac make a three day journey to the near-sacrifice, Jonah is in the belly of the fish three days, and of course our Messiah lay in the grave three days.

And now, we see in verse 20 that three days later, it is Pharaoh's birthday, and he decides to have a party.  An ancient custom of the Egyptian Pharaohs was to release a prisoner during his birthday celebration.

Did you ever notice that nothing good ever came out of a biblical birthday celebration? Pharaoh, Herod, Job’s children?

So Pharaoh restores the cupbearer and hangs the baker, just as Joseph has predicted.  And then the cupbearer immediately forgets Joseph. It is likely that he does not forget about Joseph, but that he chooses to remain silent about him - not wanting to call Pharaoh’s attention to his time in prison.

There is a purpose to this willful forgetfulness, however.  God's unfolding plan requires Pharaoh to have need of Joseph's interpretive abilities when he has disturbing dreams of his own.  God's timing will come into play in the next chapter.

Bread and wine is a common biblical theme.   In a general sense, bread represents food and wine represents drink.  Sustenance. 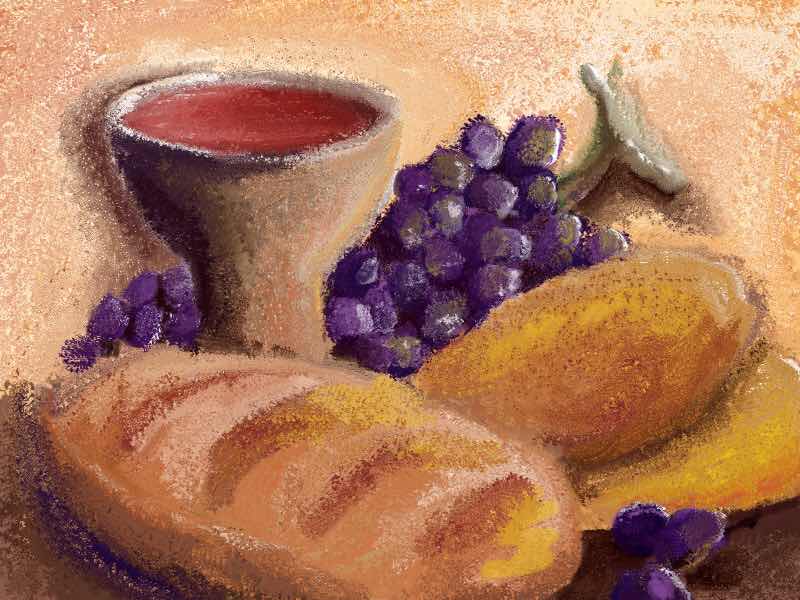 But they are also highly symbolic of our ultimate sustenance - Messiah Himself.   Remember Melchizedek from chapter 14?  He and Abraham share bread and wine together.  When Yeshua eats his Passover meal with His disciples, he links the two elements to Himself and what He is about to do.

And Yeshua's body is broken and killed (just like the baker is hung on a tree), and it is through His blood that we have redemption (as we see in the restoration of the cupbearer).

Posted by Gratefully Grafted In at 6:08 AM