Chapter 42 now switches scenes back to Jacob and family in the land of Canaan.

The famine is severe and the family of Jacob is hungry.

When he mentions that Egypt has grain, the brothers look at each other uneasily.  Are they thinking of Joseph, whom they believe is a slave down there somewhere, if he is even still alive? For over twenty years they have kept the ugly secret of their dastardly deed.  Their consciences are still eating them alive.

Jacob summons the ten older boys and sends them off to Egypt, keeping Benjamin the favorite back at home.  So off they go, falling in line with others from the area who are also hungry and seeking bread.

Meanwhile, back in Egypt, Joseph the governor is selling copious amounts of grain to people from all over the place.

Suddenly, his ten brothers are before him, bowing down.  Of course he recognizes them, but they have no idea who he is.  Remember, Joseph is dressed like an Egyptian, which is very different from the look of a Hebrew.  And about 22 years have passed since they had last seen him. 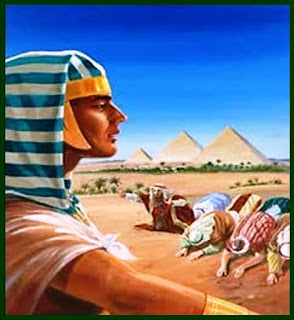 Do his previous dreams come instantly to mind, or does it take a few moments to register?  He decides to test them.  He speaks harshly to them, searching their hearts and minds.  Three times Joseph accuses them of being spies.

The brothers assure him they are not spies, and they give him a family history lesson, probably what Joseph was hoping for.  The brothers admit to Joseph that one brother is no more, and that little bro is home with dad.

Joseph, wanting to see his little bro, first tells his brothers that they won't get to go home until the little brother comes to Egypt. Then he throws them all in prison and makes them stay there... three days.

After those three days, Joseph gives them an option for survival and lets them know that he too fears God.  He agrees to keep one of them, and insists that they go home and get the youngest brother.

A conversation ensues among the brothers, but they do not realize that Joseph understands every word.  He hears them confessing their guilt regarding him, and it moves him to tears.  He has to leave the room to regain his composure.  But then he comes back and speaks with them again, before seizing Simeon and having him bound and thrown in prison.

Why Simeon? Did they cast lots? Did he volunteer? We are not told. We do know from the Dinah incident in Shechem that he is hot-headed and cruel. It is quite possible that he had been the chief instigator in Joseph's demise.

It is interesting to note that Joseph has maintained his faith and integrity all along, both in poverty and in wealth and power.  It is easy for us to forget God when all is going well in life, and it is also easy to get bitter toward God if we are in the midst of pain or poverty.  They are the opposite sides of the same coin... both are based on self-centeredness.  Joseph does neither.

So anyway, the remaining nine guys head home, but they do not know that Joseph has returned their money in their sacks of grain.  While enroute, one of the brothers discovers the money in is bag.  Is Joseph testing them further?  Or is it a gesture of goodwill toward them?

The brothers are terrified.  They question why God has put them in this position.  When you are governed by a guilty conscience, as the brothers have been for so many years, you tend to question every little conflict and perhaps see it as a potential punishment.

When they get home, boy do they have a tale for Jacob, who is not amused at all.  Then the rest of them look into their sacks, and they all find their money returned.

This is what Jacob says in verse 36:
And Jacob their father said to them, “You have bereaved me: Joseph is no more, Simeon is no more, and you want to take Benjamin. All these things are against me.”

Reuben the firstborn steps in and offers his two sons as collateral for returning Benjamin to their father (as if the death of two beloved grandsons would somehow make up for the loss of a son??)

But the chapter ends with Jacob giving an andamant NO!  He will not risk Rachel's remaining child.

Joseph's disappearance twenty years earlier and Rachel's death has made Jacob bitter and pessimistic. Jacob is focusing on his circumstances and is missing God's bigger picture. Jacob is choosing not to forget his misfortunes, the way Joseph does.  And Jacob doesn't have the reminder of Romans 8:28 yet. But the story continues, and God will soon teach him an amazing lesson.

Several more parallels between Joseph and Yeshua show up in this chapter:

Posted by Gratefully Grafted In at 12:52 PM