Chapter 48 opens with Joseph receiving a report that Jacob is ill.  This is the first place in scripture where illness is mentioned.  Joseph hurries to see Jacob, bringing with him his two Egyptian-born sons, Manasseh and Ephraim.

When Jacob sees them coming, he, Israel, strengthens himself and sits up in bed.  The first thing he does is repeats the Abrahamic Covenant to Joseph and his sons in verses 3 and 4:

Then Jacob said to Joseph: “God Almighty appeared to me at Luz in the land of Canaan and blessed me, and said to me, ‘Behold, I will make you fruitful and multiply you, and I will make of you a multitude of people, and give this land to your descendants after you as an everlasting possession.’

God Almighty - El Shaddai - shows up once again in the context of fruitfulness and multiplication.

Next Jacob does something astounding.  Look at verse 5:
And now your two sons, Ephraim and Manasseh, who were born to you in the land of Egypt before I came to you in Egypt, are mine; as Reuben and Simeon, they shall be mine.

Jacob is adopting Joseph's boys as his own.  He is giving them the rights of full sonship. In this way, Jacob is giving the firstborn's double portion to Joseph.

Jacob's adoption of Joseph's sons explains why scripture lists the 12 tribes of Jacob in different combinations.  Because of this adoption, there are actually 13 sons of Israel - a baker's dozen, so to speak - when Joseph was split into two tribes.  Thus the tribes can be arranged in different ways and still remain 12 tribes.

In fact, Revelation 7 includes Joseph and Manasseh, but does not mention Dan and Ephraim. Both of those tribes eventually have a major problem with idolatry, which could be why they don't get a shout-out in Revelation.  But did God wipe the earth clean of those tribes?  I think not.  I believe they are included in God's ultimate promise of every tribe, tongue, language, and nation worshiping before the throne.

The number 12 is often associated with government or administration in God's eyes.  There are 12 tribes, 12 apostles, 12 princes of Ishmael, 12 stones on the high priest's breastplate, 12 loaves of showbread, 12 each of silver platters, silver bowls, and gold pans for service at the tabernacle, 12 spies to search out the land, 12 heavenly gates, 12 months in a year, 12 numbers on a clock, 12 fruits on the tree of life ... and many more.  I think you get the picture.  Twelve is a special number to God. 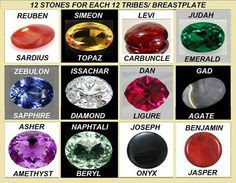 In the next section, Jacob blesses the two sons that he has just adopted.  And in keeping with a biblical theme that we have seen time and time again, Jacob places his favored right hand on the second-born, despite Joseph's efforts to correct him.  Ephraim, meaning fruitfulness, gets the blessing usually reserved for the elder.

With Jacob's hands in place, he utters the following blessing in verses 15 and 16:
“God, before whom my fathers Abraham and Isaac walked,
The God who has fed me all my life long to this day,
The Angel who has redeemed me from all evil,
Bless the lads;
Let my name be named upon them,
And the name of my fathers Abraham and Isaac;
And let them grow into a multitude in the midst of the earth.” 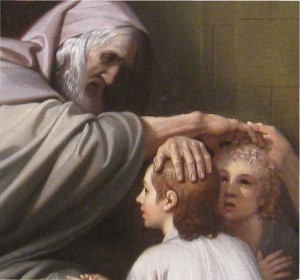 Is Jacob thinking of his own life so many years before, when he as the younger received the firstborn blessing from Isaac?

This blessing was fulfilled in Israel's history.  Both tribes were blessed, but Ephraim was greater as a tribe, even to the point where the name Ephraim was used to refer to the whole northern nation of Israel.

There is a movement today among Gentiles who call themselves Ephraimites, believing that today's believers are literally the lost tribes of Ephraim.  I don't subscribe to this view, as I see it as just another version of Replacement Theology.  Again, there is God's promise of every tribe, tongue, nation, and language, and not just Israel's lost tribes... see Revelation 5:9 and 7:9.

Jacob is demonstrating the sovereignty of God through his adoption of and subsequent blessing of Manasseh and Ephraim.


And our God demonstrates His sovereignty by adopting and blessing us.  In Ephesians 1, Paul's greeting includes this:
Blessed be the God and Father of our Lord Jesus Christ, who has blessed us with every spiritual blessing in the heavenly places in Christ,  just as He chose us in Him before the foundation of the world, that we should be holy and without blame before Him in love,  having predestined us to adoption as sons by Jesus Christ to Himself, according to the good pleasure of His will.

Even the choosing of Israel as a people is due to the sovereignty of God.  Ezekiel 16 tells us that the LORD says to Jerusalem, “Your birth and your nativity are from the land of Canaan; your father was an Amorite and your mother a Hittite.

Ezekiel 16 goes on to describe the harlotry of Jerusalem (it isn't pretty) but then her ultimate redemption because of God's everlasting covenant.

God is completely and totally sovereign.  He is in charge.  Call me a Calvinist if you must.  I also believe in the free will of man, so call me an Arminian. I believe that both are valid; it is a matter of viewpoint - ours versus God's.  We are free to choose, but God knows the entire story.

The chapter ends with this promise:
Then Israel said to Joseph, “Behold, I am dying, but God will be with you and bring you back to the land of your fathers.

Always the land.  It is inseparable from the covenant.  It matters even today, and perhaps especially today.

Posted by Gratefully Grafted In at 11:50 AM