We are at the point now where sin and death has entered the world.  Chapter 3 wraps up with Adam's punishment.

Then to Adam He said, “Because you have heeded the voice of your wife, and have eaten from the tree of which I commanded you, saying, ‘You shall not eat of it’:

“Cursed is the ground for your sake;
In toil you shall eat of it
All the days of your life.
Both thorns and thistles it shall bring forth for you,
And you shall eat the herb of the field.
In the sweat of your face you shall eat bread
Till you return to the ground,
For out of it you were taken;
For dust you are,
And to dust you shall return.”

And Adam called his wife’s name Eve, because she was the mother of all living.


Also for Adam and his wife the Lord God made tunics of skin, and clothed them.  (Covered in my previous post, Naked! regarding blood atonement/covering.  Pun intended.)

Then the Lord God said, “Behold, the man has become like one of Us, to know good and evil. And now, lest he put out his hand and take also of the tree of life, and eat, and live forever”— therefore the Lord God sent him out of the garden of Eden to till the ground from which he was taken. So He drove out the man; and He placed cherubim at the east of the garden of Eden, and a flaming sword which turned every way, to guard the way to the tree of life.

Adam and his wife were booted from Paradise. 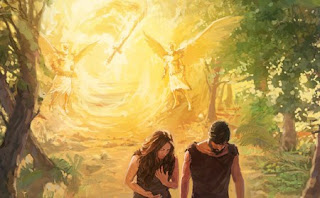 They were driven out of the eastern entrance, because that is where the angelic guards were set up, to keep them from re-entering the garden.  The LORD in His mercy was actually protecting Adam and Chava from eating the tree of life, so that they would not live forever in a fallen state, disconnected from Him.  Something had to be done to restore that relationship before that could happen.

So eastward they went, to scrounge a living from the thorny ground.  Remember, Adam himself was not cursed, but the ground was.  Scripture often gives pictures of blessings and curses, and quite often that concept is tied to the directions of east and west.  I have written about this before.  You can click here if you feel like a bunny trail, but suffice it to say that in Yeshua, our sins are as far as the east is from the west (Psalm 103:2, which was ironically a part of my Bible reading for today).

The one thing that keeps jumping out at me in this section is the thorns.  I keep a garden, although not a very good one.  I am not very adept at keeping out the weeds and the thorns.  Thanks, Adam.  I don't have to plant the weeds and thorns, they just show up on their own.  But I do notice that good things, like tomatoes, eggplants, peppers, and okra (yes, okra is good), do NOT show up on their own... they must be cultivated.  It is hard work!

What a picture of good and evil.  Evil is just there, lurking.  It shows up on its own, and we have to root it out.  Conversely, we need to intentionally sow and nurture the good and righteous things.

Psalm 1 is a good illustration of this truth:

Blessed is the man
Who walks not in the counsel of the ungodly,
Nor stands in the path of sinners,
Nor sits in the seat of the scornful;

(standing, walking, and sitting come naturally, but fighting off the yucky stuff requires action)
But his delight is in the law of the Lord,
And in His law he meditates day and night.

He shall be like a tree
Planted by the rivers of water,
That brings forth its fruit in its season,
Whose leaf also shall not wither;
And whatever he does shall prosper.
The ungodly are not so,
But are like the chaff which the wind drives away.

In other words, stay connected to the LORD of the universe!  Make time for Him.  Talk to Him, read His word, and meditate on those words.

It is interesting to note that things like chaff, thorns, and thistles show up frequently in scripture.  They are a picture of fallen creation.

When the LORD appeared to Moses, He appeared in what our Bibles tell us is a burning bush.  But what most translations don't mention is that it is actually a burning thorn bush.  Thorns are a picture of sin and decay and fallen man.  God is showing up as an all-consuming fire, and yet, thorny and sinful man is not consumed. 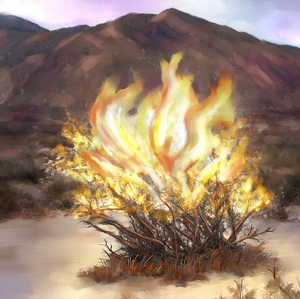 There's the gospel again!  God making a way so that we are not destroyed.

It is no coincidence that Yeshua was arrayed with a crown of thorns at His crucifixion. Through His death and resurrection, He overcame sin, death, and the fallen creation. 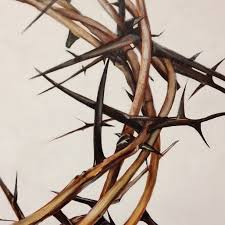 Hallelujah! He wins! But I am getting way ahead of the story.  Stick around!

The story continues here.
Posted by Gratefully Grafted In at 7:46 AM