We now move on to chapter 4, and the story of mankind continues. Chava gave birth to her first baby. Genesis 3:16 said that in childbirth she would have pain, and indeed, in pain she had Cain.  (Why does the song The Rain in Spain come to mind here??)

Genesis 4:1 is loaded with goodies that we don't see in the English, only the Hebrew.

The first thing that I noticed is that the covenant word ET is used three times! ET - spelled aleph tav - is the very signature of the Messiah, which I have addressed previously here.

My version reads thusly:
Now Adam knew Eve his wife, and she conceived and bore Cain, and said, “I have acquired a man from the Lord.”

Cain means acquire. Chava understood the LORD's promise and believed that her firstborn was the fulfillment of the that promise back of Genesis 3:15. She thought that Cain was the promised seed, the redeemer, the Messiah. She knew that the promised redeemer would be both human and divine, and therefore believed that she received the child with the LORD. She had no reason to believe that YHVH's story would be thousands of years in the unfolding. She simply believed that it was time for it to happen, just as promised.

In fact, Chava was so sure that Cain was the Messiah, that she named her next son Abel, which means vanity. In other words, the first one is acquired with God, but the next one is vanity. Talk about "mom always liked you best"...

Abel also means temporary, as in his life would be short.

We know the story. Sadly, Chava would soon find out that Cain is not the God-man, the promised Messiah.

The kids grew up. Adam taught them about the LORD. And then one day, scripture tells us that they made an offering to the LORD.

And then we have a murder.

Abel was a shepherd. Cain was a farmer and grew vegetables. He was working the cursed ground that was filled with thorns. He brought in an offering from that cursed ground, and he had worked very hard to provide that offering. But Abel brought a firstborn lamb from his flock.

Let me pause for a moment and ponder why Abel was even a shepherd in the first place. Humans did not become meat eaters until after the flood. Yes, the sheep provided fleece for clothing. But I also believe that Abel was raising sheep for the purpose of sacrifice to the LORD. A reminder of the necessity of bloodshed for atonement. 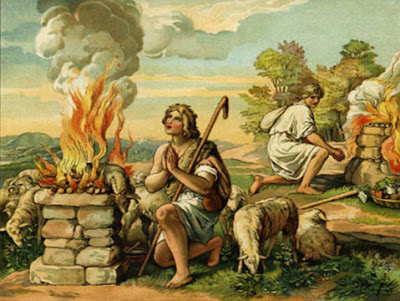 The LORD accepted Abel's offering. The Hebrew means that he gazed upon or regarded it. Cain's offering was rejected - the LORD did not gaze upon or regard his offering of grain that he worked so hard to provide.

At face value, this doesn't seem very fair. But there is an underlying truth here. Our own works don't save us. It is the blood of the firstborn Lamb that provides our atonement, or covering. We saw that same truth depicted when Adam and Chava tried to cover themselves with fig leaves, but the LORD intervened and covered them instead with animal skins.

When Cain's offering was rejected, the Hebrew tells us that Cain's face glowed with anger. He was red-faced mad, and his countenance fell. God asked, “why are you so upset? If you do the right thing, you’ll be fine."

Cain most likely knew that his offering was wrong. Adam had probably taught him the proper way to worship YHVH. He should have obtained a proper offering from Abel. He knew what was right, and did not do it.

Then the LORD told Cain, sin is crouching at your door, and desires to rule over you (the same word given to Chava in Genesis 3:16, when her desire would be to rule over her husband) but you must master it (rule over it), meaning that effort must be made on Cain's part.

Again, we see choice offered to man in the Bible. This is the first choice that is demonstrated after the tree fiasco in the garden. The whole Bible is about choices. You are not a robot, you have a choice.

The Holy Spirit empowers us to make right choices. You can’t say, God made me do it, or the devil made me do it. In the end, you’re responsible, and you did it.

What about this idea of sin ruling over us? We cannot serve two masters. Either we allow sin to rule over our lives or we allow the Holy Spirit to rule over our lives and our sin nature. And in doing so, we develop the fruit of the Spirit... love, joy, peace, patience, kindness, faithfulness, gentleness, and self-control. It is a lifelong process.


Cain did not heed the warning to master his sin. Verse 8 says that Cain talked with Abel his brother, and then they went out to the fields, where Cain murdered his brother. His sin had mastered him. The Hebrew suggests that Cain coaxed Abel out to the field for the very purpose of murder. 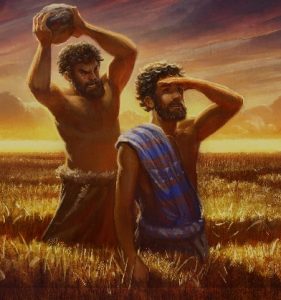 So the Lord came to Cain and said, "Where is your brother?" Now we have the first lie in scripture… "I don’t know. Am I my brother's keeper?"

What does blood crying out from the ground mean? I believe it is figurative; a cry for justice, just like the souls under the altar in Revelation 6:9 (I don't believe the vision is depicting actual beheaded people under a literal altar in heaven).

Cain becomes the first cursed man. Remember, Adam and Chava themselves were not cursed in the garden, but the snake and the ground were cursed. And now Cain was cursed from the very ground that received Abel's blood from Cain's own hand.

The LORD continued with Cain's punishment, telling him that the ground would no longer produce food for him; he was to become a wandering vagabond on the earth.

God rejected Cain's offering, now the ground would reject Cain's work. Cain was told he would be a wanderer. Farmers do not wander.

Cain, who just had murdered his brother, then had the audacity to complain to the LORD that his punishment was too severe!

So God put a mark on Cain so that nobody would kill him. So why didn’t God kill Cain? An eye for an eye?

We have here an early picture of God‘s mercy. If Cain received God's grace and mercy, so can you.

Whatever mark God gave to Cain, it worked because Cain lived. God even promised a seven-fold vengeance to anyone who would kill Cain.

Someday in the near future, believers on earth during God's wrath will also be marked, and they will live, according to Revelation 7.


Cain was sent to the east, to Nod, which means wandering. But then he built the city, and named it after his son Enoch. Enoch means dedicated. Enoch's sons started naming their own sons with a reference to God. They end in EL, a shortened version of Elohim.

It seems that Cain stopped wandering when he became dedicated to the LORD, and he build a city. The curse was broken. He taught his children about God.

The same basic story will be eventually played out later on with Joseph and his brothers, and with the nation of Israel as well.

No one has been able to wipe out Israel, because they have the mark on God on them as well.

This whole account between those early brothers depicts Abel as a type of Messiah. He was a shepherd, hated by his brother. He did not die a natural death, but was killed by his brother. And Abel's blood was innocent in the circumstance in which it was spilled. Sound familiar?

Hebrews 12:24 refers back to Genesis when describing the blood of Yeshua and the better covenant:
to Yeshua the Mediator of the new covenant, and to the blood of sprinkling that speaks better things than that of Abel.

Genesis is filled with Bible truth in seed form! It's so awesome to watch these seeds of truth grow and develop throughout the scriptures.

Stay tuned!  You can click here for the next post.
Posted by Gratefully Grafted In at 12:19 PM