The Tabernacle: A Foreshadow of Messiah Part 6 - The Altar of Incense

The golden altar of incense was placed in the Holy Place, in front of the curtain that separated it from the Holy of Holies.  It was smaller than the brazen altar - about a foot and a half square and about 3 feet tall.  It was made from acacia wood and overlaid with pure gold.  There was a horn protruding from each of the four corners of the altar. 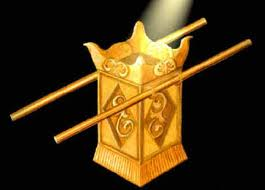 The incense burned in the altar of incense was a specially-prescribed recipe from God himself.  He called it holy and commanded that it was not to be used anywhere else (Ex 30:37).  Incense represents the sweet fragrance of accepted prayers offered up to God.  Only the priests, as intercessors for the people, were allowed to burn the incense in the holy place.  Reference to incense occurs frequently throughout the Tanakh (Old Testament). Look at this scripture and see a wonderful description of prayer wafting up to heaven:

“May my prayer be set before you like incense; may the lifting up of my hands be like the evening sacrifice.” (Psalm 141:2)

Unfortunately, there are dozens and dozens of instances in scripture where Israel burned incense to foreign idols.
Incense is a physical symbol of intimate worship.  No wonder the Lord God was very incensed with them for offering their worship to other gods.

It is interesting to note that reference to incense is only made twice in the New Testament.  The first occurrance is when the angel Gabriel visited Zechariah during his service in the temple with the news that his wife would give birth to a son.  Luke 1:9-11 tells us:

So it was, that while he was serving as priest before God in the order of his division,  according to the custom of the priesthood, his lot fell to burn incense when he went into the temple of the Lord.  And the whole multitude of the people was praying outside at the hour of incense.  Then an angel of the Lord appeared to him, standing on the right side of the altar of incense.

Later, in the book of Revelation, we read "And I saw the seven angels who stand before God, and to them were given seven trumpets. Then another angel, having a golden censer, came and stood at the altar. He was given much incense, that he should offer it with the prayers of all the saints upon the golden altar which was before the throne.  And the smoke of the incense, with the prayers of the saints, ascended before God from the angel’s hand.  (Rev 8:2-4)

The golden altar of the tabernacle is a foreshadow of the Messiah, who is now our intercessor before God the Father. During His days on earth, Yeshua prayed for the believers. Just before He was betrayed and sentenced to death, Yeshua interceded for His disciples and all believers, asking God to guard them from evil and sanctify them by His Word, and that they may see God’s glory and be a witness to the world (John 17:1-26). Today, Yeshua still is our high priest at the Father’s side, interceding for God’s people:


“Christ Jesus, who died — more than that, who was raised to life — is at the right hand of God and is also interceding for us.” (Romans 8:34)
Posted by Gratefully Grafted In at 1:00 PM