The Tabernacle Elements and the Feasts: Perfect Parallel

God has placed amazing patterns all throughout scripture.  They are there, just waiting for us to discover them!  As I mentioned on my last post, you will often notice how He uses certain numbers over and over again.  Twelve.  Forty.  Three.  Seven.

I think my favorite is seven.  The seven days of creation.  Seven times around the walls of Jericho.  The seven elements of the tabernacle.  The seven feasts of the Lord.  Seven represents completeness.  (And as a side note, I grew up in a family of seven daughters).

Now that we have taken a close look at the tabernacle, let's take a look at how the seven elements of the tabernacle line up beautifully with the feasts of the Lord.  Stay with me... this is so awesome!  The feasts of the Lord are split into three sections.  The first three - Passover, Unleavened Bread, and Firstfruits - all take place together, in an eight-day period.  There is a break, with the fourth, Shavuot, happening fifty days later.  These are the spring feasts.

Yeshua fulfilled all four of these spring feasts with His first coming.  The next three feasts, which take place in the fall, will be fulfilled when He returns.
Now I wonder, does the shape created from the placement of the elements in the tabernacle strike anyone as a coincedence?   Check this out: 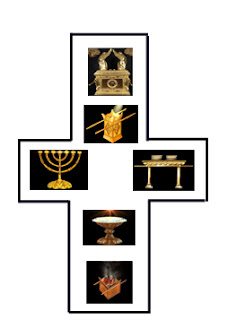 Posted by Gratefully Grafted In at 7:52 AM