The Tabernacle: A Foreshadow of Messiah Part 5 - The Golden Lampstand

Directly across from the Table of Showbread is the golden lampstand, located along the south wall of the Holy Place. 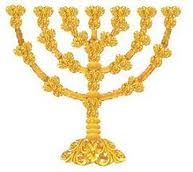 The golden lampstand, or menorah in Hebrew, was seven-branched and made of solid gold.  The lampstand had a central branch from which three branches extended from each side.  Seven lamps holding olive oil and wicks stood on top of the branches. Each branch looked like that of an almond tree, containing buds, blossoms and flowers.  The priests were instructed to keep the lamps burning continuously.

The oil is symbolic of the Holy Spirit, as is the fire.

Light is a common theme throughout scripture.

“Then the LORD spoke to Moses, saying:  “Command the children of Israel that they bring to you pure oil of pressed olives for the light, to make the lamps burn continually.  Outside the veil of the Testimony, in the tabernacle of meeting, Aaron shall be in charge of it from evening until morning before the LORD continually; it shall be a statute forever in your generations.” (Leviticus 24:1-3)


“Then Jesus spoke to them again, saying, “I am the light of the world. He who follows Me shall not walk in darkness, but have the light of life.”(John 8:12)

"I have come as a light into the world, that whoever believes in Me should not abide in darkness..” (John 12:46)
Yeshua is represented by the main branch of the lampstand, and we as believers are represented by the six branches that extend from original branch. Having believed, we are now living as “children of light” (Ephesians 5:8) who draw our source of light from Yeshua, the true light. He calls us “light of the world” and commands us to “let your light shine before men, that they may see your good deeds and praise your Father in heaven” (Matthew 5: 14, 16). Not only so, but the branches serve as a picture of Yeshua's description of our relationship with him: “I am the vine, you are the branches … apart from me you can do nothing” (John 15:5).

Two other significant symbols that can be seen from include the fact that it was made of pure gold (not gold plated) and had seven branches. Pure gold is a representation of the deity and perfection of Yeshua the Messiah, and seven is the number of completeness in the Bible. The believer is made complete by the perfection of Yeshua.

One thing to note:  Some versions use the term "candlestick" instead of "lampstand," which is not an accurate portrayal.  The lampstands used oil, not candles.  Remember, oil - not wax - is the symbol of the Holy Spirit.
Posted by Gratefully Grafted In at 8:48 AM