We come now to the actual tent of meeting, the tabernacle of the living God.

Everything that we have seen in the courtyard serves to make sinful people acceptable to appear in the holy presence of the Most High through the wonderful grace of God.  This was done through the reconciliation, redemption, and sanctification at the altar and laver.  We are now ready to abide with the Almighty. 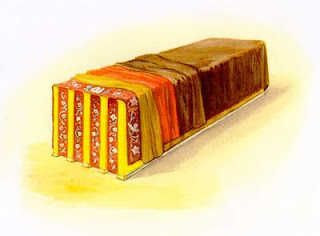 The walls of the tabernacle were boards of acacia, overlaid with gold.  What a picture of a worthy dwelling place for the Almighty God!  The entire length of the tablernacle was thirty cubits (about 45 feet).  The Holy Place was twenty cubits long and ten cubits wide, and the Holy of Holies was a ten-cubit cube (about 15 feet).

The boards of the walls were held together by poles of acacia overlaid with gold.  Each side had four poles, which helped to provide strength and stability to the entire structure.  From Ephesians 4:  "the whole body, joined and knit together by what every joint supplies, according to the effective working by which every part does its share, causes growth of the body for the edifying of itself in love."  One pole remained almost invisible.  It ran horizontally through the middle of the boards and served to bind them from within - a picture of the Messiah Who is in control.  Only when all the poles were inserted in their places did the whole structure have the stability God wished it to have.