Genesis chapter 10 is just a bunch of names and places, so we can skip that chapter.

Just seeing if you are paying attention.  Of course there will be no skipping!

Chapter 10 outlines the descendants of Noah and the nations that were formed at that time.  How many nations are represented in Genesis 10? 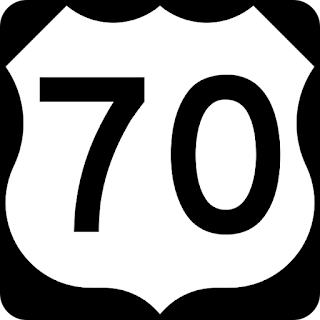 (A pop quiz:   How many animals were sacrificed when the temple was dedicated? How many people from Jacob's family went down to Israel?  How many bulls were sacrificed every year at Sukkot?  How many languages did God create at the Tower of Babel?  How many years young is the State of Israel today, as of this writing?  The answer to all these questions and more is 70.  Seventy is a number that represents the nations of the world. The LORD eventually took one family of 70 people to accomplish His purposes for the entire world).

What does that word nations mean, biblically speaking?  The Hebrew word is goyim, and means families, or people groups.  Often in scripture, the word is translated gentiles.  The New Testament Greek word is ethnos.  It means ethnic groups, and not necessarily geo-political borders.  Often we have heard the saying "Jews and Gentiles," but that is not an accurate term.  The Jews are also one of the goyim, (ethnicity, or people group) as well.

Let's look at the progeny of Noah and where they ended up.

First, Japheth.  His sons were Gomer, Magog, Madai, Javan, Tubal,  Meshech, and Tiras.  These guys and their kids eventually moved north and west, to the areas we know today as Turkey, Russia, Cypress, Greece, and the Far East.  Some of their names are featured prominently in the prophecies of Ezekiel 38 and 39, when those from the north align themselves with other nations and come against Israel in the last days.

Ham and his descendants are mentioned next.  The sons of Ham were Cush, Mizraim, Put, and Canaan (there's the guy whose name came up frequently in Genesis 9).  The sons of Ham eventually became the Egyptians (Mizraim), Ethiopia (Cush), Libya (Put), and Canaan - who eventually would be eventually kicked out of the Promised Land.  The Canaanite tribes included the Hittites, Sidonians, Jebusites, Amorites, and the Girgashite, and a bunch more.  These were the kids of Canaan (son of Ham), who was cursed in Noah's prophecy.

Next, let's look at Cush.  The word Cush means black.  Many biblical scholars have therefore surmised that most of the people of Africa descended from this dark-skinned man.   However, one of his sons did not remain in Africa, but made his way east.

The English translation makes it sound like Nimrod was a mighty and strong man for YHVH.  But that is not so.  In the Hebrew, it carries the meaning of he was a mighty hunter of souls; in other words, taking people away from YHVH; leading them astray.  He was the world's first dictator, and he was an idolator that led many others into idolatry.   There will be much more on Nimrod soon, when we look at chapter 11.

Verse 14 mentions the Philistines for the first time in the scriptures. Who exactly were they?

The Philistines were known as the sea people. They were descendants of Ham, and they originally left Egypt and settled on the island Crete. They moved around a bit, and eventually made their way into the land of southern Israel and settled there. They brought with them great knowledge of iron and bronze; and indeed, when David was fleeing from King Saul, he went down and lived among the Philistines. He learned much about metal works, and later introduced it to Israel.


1 Samuel 13:19 tells us, Now there was no blacksmith to be found throughout all the land of Israel, for the Philistines said, “Lest the Hebrews make swords or spears.”

King David changed all that after learning ironworks during his time among the Philistines.

The Philistines were one of Israel's great enemies, from the time of Abraham on.  In 135 AD, after a Jewish uprising in the Holy Land, Roman Emperor Hadrian kicked every Jew out of Jerusalem, and renamed the entire geographical area Syria Palestina after Israel's ancient enemies.  So now you know where the word Palestine comes from... named after descendants of Ham, by a descendant of Japheth.  Who knew that the term would be still affecting the land of Israel thousand of years later??

Besides, scripture tells us numerous times that the Philistines would be destroyed, and they have indeed disappeared from history as a distinct people group.  (See Jeremiah 47:4-5, Ezekiel 25:16, Amos 1:8, Zephaniah 2:5, Zechariah 9:6).

Finally, we come to the sons of Shem.  To Shem was born Elam, Asshur, Arphaxad, Lud, and Aram.  From all these kids of Shem came the Assyrians, the Arabians, the Persians, and eventually, the Israelites.  In fact, the word Hebrew comes from Eber, the grandson of Arphaxad.  Eber means the region beyond, or crossing over.  We will look at this concept closer when we study the life of Abraham.

All of these descendants of Shem are considered Semitic peoples. 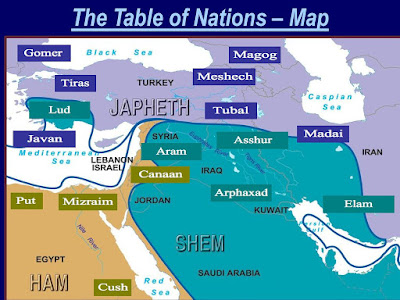 Now that we have identified seventy people groups, we are about to see God's plan continuing to unfold.  Stick around!  Click here for the next post.

Posted by Gratefully Grafted In at 8:59 AM