Now that God had made a covenant with Noah, chapter 9 switches gears beginning in verse 18.

Right away, we are told that from the three sons of Noah, the entire world was populated.  There is also a mention of Ham's son Canaan here - a seemingly random mention because none other of Noah's grandsons are mentioned here, and he had a bunch!  But since I believe there are no accidents or coincidences in scripture, there must be a reason for it.  Let's find out.

Noah became a farmer and planted a vineyard.  He then got drunk and passed out naked in his tent.


Now wine is frequently a symbol of blessing in the Bible. A picture of joy, God‘s provision, and the Holy Spirit.  Yeshua's first miracle involved wine.

So wine is a good thing, a biblical thing, but its misuse is bad.

Some time had passed between leaving the ark to this incident.  It takes a while from planting vineyards to getting grapes; at least four years.

But this incident with Noah and the wine probably took place much later than four years after the ark, because as we will see in the next chapter, Canaan was the youngest of Ham's four sons.  And we know that there were only eight people on the ark.

So Ham (the father of Canaan, scripture says again) happened to see his father naked, and then he exited the tent and told his brothers.  Ham acted very disrespectfully toward his father.  The brothers, of course, were horrified and embarrassed, and showed honor to Noah by walking backwards with a blanket to cover him.  Nakedness and shame are related in the scriptures.  Both Shem and Japheth inherently knew that there was shame in their father's nakedness. 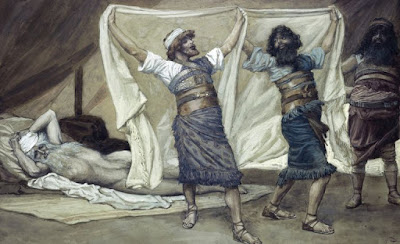 When Noah woke up, he somehow knew what his younger son had done.  Did someone tell him?  Did he remember?  We are not told.

Why does Noah seem to curse Canaan right off the bat? Canaan's name is peppered throughout this whole incident, more than anyone else's name.  But Canaan didn’t do anything. Canaan was Ham's son.

Noah was not actually not cursing his grandson, he was prophesying.

Canaan, Ham's son, received the first prophecy.  Cursed be Canaan, a servant of servants he would be to his brethren.


Notice that Ham did not receive his own prophecy at all, but his son was going to suffer for his actions.

Noah continued, blessing the LORD, the God of Shem, and repeating that Canaan would be his servant.

Then Noah moved on to say, May God enlarge Japheth, and may he dwell in the tents of Shem, and may Canaan be his servant.

First of all, I noticed that Canaan's servant-hood was repeated for the third time!  Any time something is said three times in scripture, it means an ultimate emphasis.  What happened to Canaan and his descendants?  Why was he mentioned in this section more than anyone?

Canaan was the youngest son of Ham and became the grandfather of Nimrod, who was a bad dude indeed!  More on Nimrod soon when we look at the Tower of Babel.  Canaan was the quintessential middle man, caught in the middle between his disrespectful father Ham and his evil grandson Nimrod.  And what happened with Nimrod, as we will soon see, still deeply affects the world today.

Later on in the Bible, the Canaanites inhabited the Promised Land and would be killed, driven out, or made into slaves - as in the case of Joshua and the Gibeonites.  They were indeed a cursed people.

I guess I could say that I dwell in Shem's tent.  According to Ephesians 2, I was once far off; a stranger to the covenants of promise and the commonwealth of Israel and without hope, but I was saved by Jewish blood and have now been brought near.... grafted in to the household of faith!

The chapter wraps up after Noah prophesied over his sons, and we are told that he lived 350 more years, and died at the ripe old age of 950.

So where did Noah and his progeny go?  Click here to find out!

Posted by Gratefully Grafted In at 8:45 PM