Genesis 6 starts out with this wild set of verses, which I had never really studied in depth before.  But it actually sets the stage for everything which is about to take place.

Now it came to pass, when men began to multiply on the face of the earth, and daughters were born to them, that the sons of God saw the daughters of men, that they were beautiful; and they took wives for themselves of all whom they chose.

Let's break this down a bit.   The earth was filling up with people, many of whom were beautiful women.  These beautiful daughters of men caught the eye of the sons of God.  Who are these sons of God?   In Hebrew, the term is ben elohim.

But beyond that, the word elohim can also mean gods, or members of the spiritual realm, both good and bad.  Having an understanding of this concept will help to make sense out of different verses in scripture.

For example, Psalm 138:1 says,
I will praise You with my whole heart;
Before the gods I will sing praises to You.

Also, Psalm 82 begins with this:
God stands in the congregation of the mighty;
He judges among the gods.
Yeshua Himself quotes Psalm 82:6 in the gospel of John:
Yeshua answered them, “Is it not written in your law, ‘I said, “You are gods” ’?

Also, the very first commandment given at Sinai was no other gods before you.  If there were no other gods, or elohim, then this command makes no sense.

This is not to say that God Almighty is but one in a pantheon of gods.  Indeed no, He is the Creator and He created all of the others.  But they are beings that exist in a different plane than mankind.  Elisha's servant was given a glimpse of this spiritual realm in 2 Kings 6 when he was shown the supernatural beings ready to fight on his behalf.

So who were these sons of God in Genesis 6?  A son of God is any being that was directly created by God, including Adam, all the angels and fallen angels in the spiritual realm, and Yeshua the Messiah. (And remember my last post?  When we are redeemed by the Messiah, we also have a right to be called children of God.)

Why is this concept important, and why does the account of the flood begin this way?

Because what was going on with these ben elohim was the main reason for the flood.

Look at verse 4:
There were giants on the earth in those days, and also afterward, when the sons of God came in to the daughters of men and they bore children to them. Those were the mighty men who were of old, men of renown.

The sons of God were able to take on human form to do their wickedness.  (Later in Genesis 18, the people were wanting to know the two angelic visitors to Sodom). And the LORD was greatly displeased with this activity.  First, in His mercy, He shortened the length of man's life to 120 years.  But as this wicked activity continued, the LORD was greatly grieved.

Verse 5 says,
Then the LORD saw that the wickedness of man was great in the earth, and that every intent of the thoughts of his heart was only evil continually.

Whatever was going on with these giant, it was incredibly evil.  The word for giants in Hebrew is Nephilim.  They show up frequently in the Hebrew scriptures, both before and after the flood.  They are the genetic result of the union between a son of God and a daughter of men.  The genetic line was corrupted, and the world was filled with this corruption:

Chapter 6 goes on to describe the violence of the earth, and that it was indeed corrupted.

Look at verses 8-12.
But Noah found grace in the eyes of the Lord.  This is the genealogy of Noah. Noah was a just man, perfect in his generations. Noah walked with God.  And Noah begot three sons: Shem, Ham, and Japheth.  The earth also was corrupt before God, and the earth was filled with violence. So God looked upon the earth, and indeed it was corrupt; for all flesh had corrupted their way on the earth.

First, a note on that word violence.  Ironically, the word in Hebrew is hamas.  The terrorist group known today as Hamas is an Arabic acronym for the Islamic Resistance Movement.  I believe this is not a coincidence.

And did you catch that word perfect?  Noah wasn't perfect in the sense that he never sinned.  The Hebrew word for perfect means complete, sound, upright, whole, healthful, uncorrupted. Noah and his sons were uncorrupted by the nephilim.

Here's the thing.  The devil's plan has always been to destroy the plan of God.  And what did God promise back in Genesis 3?  He promised that the Seed of the woman would redeem the world.  Satan was corrupting the human lines, to prevent the redeemer from coming. A corrupted line would not bring forth the Messiah. 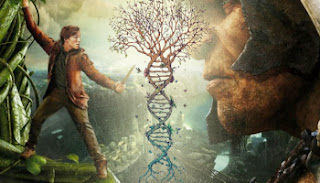 God was so displeased with the actions of these fallen angels that the New Testament shows us that they get locked up for their activities!

2 Peter 2 shows us what the LORD did with these fallen angels who were messing with His line in the time of Noah:
For if God did not spare the angels who sinned, but cast them down to tartarus and delivered them into chains of darkness, to be reserved for judgment; and did not spare the ancient world, but saved Noah, one of eight people, a preacher of righteousness, bringing in the flood on the world of the ungodly

(This is the only place in scripture where the word tartarus is used.  It is an abode only for wicked angels; never for man).

Jude 1:6 repeats this truth:
And the angels who did not keep their proper domain, but left their own abode, He has reserved in everlasting chains under darkness for the judgment of the great day

More giants show up in the Hebrew scriptures after the flood.  Further on, we see more nephilim - the Rephaim, Amalekites, Anakites, and of course Goliath.  In Numbers 13, the children of Israel were afraid to take the promised land because of the nephilim, or sons of Anak, they discovered there.  The devil was still trying to mess up the plan of the Messiah.  But I believe that whenever the fallen angels did this, the LORD locked up the culprits in tartarus, where they remain today.

We don't hear about these corrupted beings anymore.  Could it be that because the Messiah has been born, there is no more reason for the devil to try and corrupt the line?

Chapter 6 continues in verse 14 with directions for building the ark.  My next post will address that.  Click here to read it.

Posted by Gratefully Grafted In at 10:30 AM