Two more chapters!  I'm excited to wrap up one of my favorite books of the Bible.

I love how chapter 65 starts out:

Only as a people group was called by His name (Deuteronomy 28:10). But here, God is revealing Himself to people other than .  This is us!

However, we see quite a contrast in verses 2-7. God stretched out His hands to His people Israel, but they committed abominations which led to punishment.

But does He leave it at that?  No!

Verses 8-10 give us a another glimpse of the restoration of the remnant of .  So far this chapter looks a lot like Romans 11 (similar to Isaiah 49).  His people, Israel, fell into sin and idolatry;  God reaches out to the nations; but then He comes back and redeems the remnant of Jacob.  God is not done with .  Replacement Theology just does not hold up to the full counsel of scripture.

Isaiah returns to rebuke mode in verses 11-12.  Just as the previous verses were directed toward the future remnant of Israel, I believe these verses speak to those who will not return to YHVH.  (And sadly, they are probably not even reading these verses).

The next section, verses 13-14, portray a series of opposites. I believe we are seeing a picture of His servants in the Gentile church (that's us) during the blindness of Israel.

Verse 15 continues with some astounding prophecy:

You shall leave your name as a curse to My chosen;
For the LORD God will slay you,
And call His servants by another name;

I believe this is a prophecy of how the church will treat Israel during their blindness. The reason I believe this is because it happened! The church has treated the Jews very poorly for the past two millennia.  I recommend the book Our Hands are Stained With Blood, written by Michael Brown - a Messianic follower of Yeshua.  It retells the tragic story of persecution of the Jews, in the name of Jesus.

The last phrase of verse 15 tells us that followers of Yeshua will be given a new name, and in fulfillment of this prophecy, it happened.

The term Christian was introduced in Acts 11:26. To put it in context, here is Acts 11:15-26 (Peter had just had his vision in Joppa and was told to bring the good news to the Gentiles):

And as I began to speak, the Holy Spirit fell upon them, as upon us at the beginning.  Then I remembered the word of the Lord, how He said, ‘John indeed baptized with water, but you shall be baptized with the Holy Spirit.’  If therefore God gave them the same gift as He gave us when we believed on the Lord Jesus Christ, who was I that I could withstand God?”

When they heard these things they became silent; and they glorified God, saying, “Then God has also granted to the Gentiles repentance to life.”

Now those who were scattered after the persecution that arose over Stephen traveled as far as , , and , preaching the word to no one but the Jews only.  But some of them were men from and , who, when they had come to , spoke to the Hellenists, preaching the Lord Jesus.  And the hand of the Lord was with them, and a great number believed and turned to the Lord.

Then news of these things came to the ears of the church in , and they sent out Barnabas to go as far as .  When he came and had seen the grace of God, he was glad, and encouraged them all that with purpose of heart they should continue with the Lord.  For he was a good man, full of the Holy Spirit and of faith. And a great many people were added to the Lord.

Then Barnabas departed for to seek Saul.  And when he had found him, he brought him to . So it was that for a whole year they assembled with the church and taught a great many people. And the disciples were first called Christians in .

Christian was a new name, and some scholars believe it was originally a derogatory term.  Before that, believers had been called followers of the Way.  Today, many Jewish believers shy away from the term Christian.  Many Orthodox Jews write it out like this:  Xtian.  I see that term used by Jews online all the time.  Because of the prophecy here in Isaiah, Christianity became very offensive  - a stumbling block to Jews.  Jewish believers in Yeshua are thought by their families and friends to be traitors.  (Not if they become Buddhist, Hindu, atheist, etc.  Typically, those are all fine.  Only Christianity is a problem).

This is why ministry to Jews is generally so different than other people groups.  They do not care what you know until they know that you care.  And we have almost 2000 years of distrust to overcome.

For behold, I create new heavens and a new earth;
And the former shall not be remembered or come to mind.

All that previous junk – gone from our memories.  When God restores, He really restores!!


The reference to the new heavens and new earth will come up again in chapter 66.  In the New Testament, we see it in 2 Peter 3 and in Revelation 21.  The Jewish people refer to it as The World To Come.  I love this!  It's so much more accurate than the widespread Christian paradigm of die and go to heaven.

The prophecy in verses 18-19 has not happened yet; it is still to come in human history:

But be glad and rejoice forever in what I create;
For behold, I create Jerusalem as a rejoicing,
And her people a joy.
I will rejoice in ,
And joy in My people;
The voice of weeping shall no longer be heard in her,
Nor the voice of crying.

Can I just talk about for a moment?  I was at a wedding in a couple trips ago, on a hillside overlooking the entire city.  It was a very joyous occasion.  I was amazed at the honor given to in the middle of the ceremony, as they read an excerpt from Psalm 137.

The context of Psalm 137:4-6 is the Babylonian exile.  But these verses have been read at Jewish weddings for almost 2000 years.  Why?  Because is to be the chief joy.  Even above a wedding, which is one of the most joyous occasions there is. This is what that passage says:

How shall we sing the Lord’s song
In a foreign land?
If I forget you, O Jerusalem,
Let my right hand forget its skill!
If I do not remember you,
Let my tongue cling to the roof of my mouth—
If I do not exalt Jerusalem
Above my chief joy.

That joy word, simcha, is very strong. It literally means to spin around with violent emotion.  Like dancing!

The remainder of the chapter describes the future Messianic millennial kingdom:

Who are these people?  By this point, believers will have resurrection bodies that are imperishable.  But not all unbelievers are destroyed by God’s wrath at Yeshua’s return. There will be unsaved people who survive.  Animal sacrifices will still going on during the thousand years.  They continue to paint the picture of blood atonement for those who have not put their faith in the Messiah.

I believe many more will be saved during the millennium.  They will have a choice.

Remember, at the end of the millennium, the devil is released for a short time and tries to deceive the whole world.  You can read about it in Revelation 20:7-9.

Previously dead unbelievers are not resurrected for their judgment until after the thousand years, because believers are still being regenerated.  The judgment of the wicked cannot happen until it’s all said and done.

This sounds pretty awesome to me!

The chapter wraps up with this famous verse:
The wolf and the lamb shall feed together,
The lion shall eat straw like the ox,
And dust shall be the serpent’s food.
They shall not hurt nor destroy in all My holy mountain,”
Says the Lord. 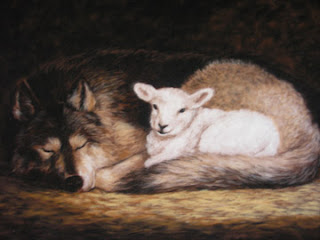 In the Hebrew, the wolf and the lamb are as one.  You see a greater fellowship than just eating together.  The animal kingdom will exist in peace.  Carnivores will become herbivores.  The serpents, however, are still eating dust.  Probably a reminder that the devil has not yet been vanquished fully; he is merely subdued for 1000 years.

The holy mountain of course refers to the and its mount, which is described in detail in Ezekiel 40-43.

LORD, may your kingdom come!  Soon!

Part one of the next chapter is posted. Click
here if you want to read it.
If you'd like to start at the beginning of this series on Isaiah, you may click here.
Posted by Gratefully Grafted In at 12:50 PM